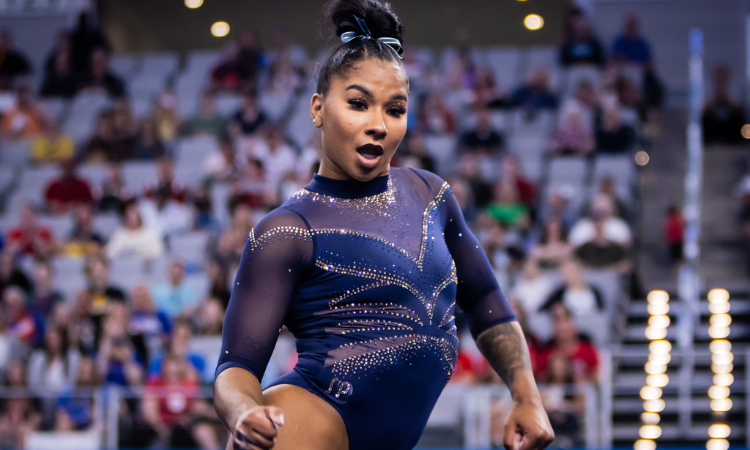 It’s unclear how much or how little the conference’s new CBS/NBC/Fox deal will affect gymnastics coverage. From what we can tell, Fox still owns most Olympic sport coverage, which would keep it on BTN and BTN+. That said, it’s unclear how the break with ESPN will change coverage of bigger matchups that occasionally landed on that family of networks. Perhaps we’ll see UCLA at Michigan show up on NBC in 2024. Who knows. The situation is murky at best across the board, and we will report on it as the situation develops and becomes more clear.

While at the OOFOS Championships, the UCLA sophomore announced that she plans to train for the 2024 Olympics in Paris. It is unclear how or if elite training will impact her 2023 season with the Bruins. Reigning Olympic floor champion Jade Carey also announced in a fluff piece that aired during day one of the competition that she also hopes to try for Paris in 2024. Olympic all-around champion Sunisa Lee (Auburn) has previously said she plans to return to elite competition in 2023 while Simone Biles (pro) and Grace McCallum (Utah) have not announced their intentions. The final member of the 2020 team, MyKayla Skinner, a Utah alumna, is retired.

Konnor McClain, who is in the class of 2023, won the U.S. senior elite national title Sunday in a come from behind victory after finishing day one in second place. The WOGA gymnast also won gold on beam. Shilese Jones, who is committed to Florida and intends to defer until after the 2024 Olympics, placed second, tied for first on bars and also won floor. UCLA sophomore Jordan Chiles rounded out the podium in third. Oregon State sophomore Jade Carey, claimed the vault title, and Florida sophomore Leanne Wong shared the bars title. Wong did not compete in the all-around after tweaking her ankle in floor touch warmups on day one.

READ THIS NEXT: Last Week in College Gym: August 17