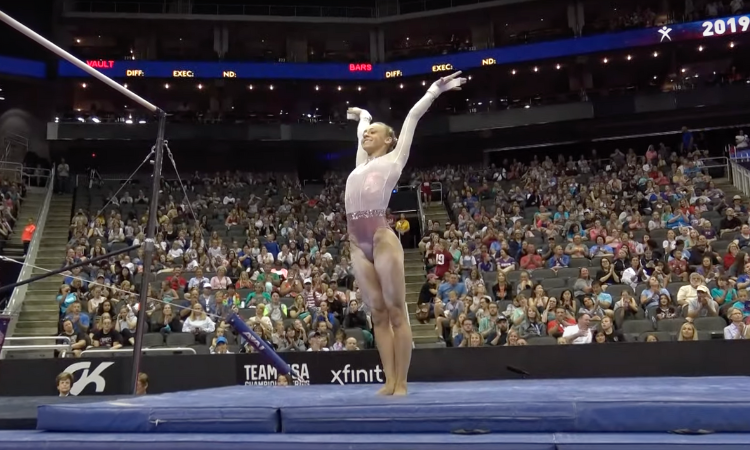 The most anticipated series is back! We looked at the data and videos for each incoming elite freshman on each event to see which gymnasts are at the top of their class across the apparatuses and in the all around.

This week we’re looking at the top elite bar workers for 2022. Without as much data to work with as the level 10 rankings, and since many of the difficult routines will be downgraded once the gymnast gets to college, we focused on the factors that are typically the source of most deductions in NCAA: form, amplitude, handstands and landing. We also took into account the potential impact the gymnast could make to their school’s lineup.

Morgan never had the D-score to be a top-ranked elite gymnast on bars, but her fantastic handstands and clean form will be richly awarded in college gymnastics. Michigan returns all but one member of its fourth-ranked bars lineup, and she is a top contender to replace that routine.

Alabama returns its top six uneven bars performers by NQS, so depth should not be an issue in 2023. However, Little should make a serious push to knock one of those returners out of the lineup. Her handstands stand out most in her routine, but other highlights include a Chow half and a double layout dismount with her legs glued together.

DiCello’s best international results have come on the leg events, but she is also very solid on the uneven bars. She has a whole bag of tricks she could potentially bring to college, but a particular highlight that’s likely to stick around is her Pak to Van Leeuwen combination in which she holds her legs perfectly together.

UCLA’s bars lineup was inconsistent in 2022 both in composition and performance and ended up ranked 19th in the country, its lowest of any event. Alipio brings quality depth on the event; while she has some minor form breaks, she maintains beautiful toe point throughout her routine.

Sorrento competed a piked Jaeger, a Ricna and a Van Leeuwen during her career as a Canadian elite. She struggled with consistency on this difficult routine, but with a smart composition she should score very well in college.

Greaves was well-known for her uneven bars work as a junior elite but has competed sparingly at the senior level. She did compete bars at the recent 2022 national championships, so it feels likely we’ll see her featured in the Auburn lineup come January.

German paces herself well during her routine, allowing her to form solid handstands on top of the bar while maintaining clean form even on her more difficult skills. Because of Alabama’s aforementioned depth here, we may not see German right away, but she has enormous potential on the event in college.

Alvarado is the latest in a string of international recruits to head to Mount Pleasant, where the 2020 Olympian from Costa Rica will make an immediate impact on bars. Her elite routine featured a floaty Maloney to Pak, a Van Leeuwen and a straddled Jaeger, any of which could easily slot into her NCAA routine.

Scott is this week’s wildcard entry on the list, given that she’s only competed in one elite meet since 2018, but she is a cult favorite among gymnastics fans for her training videos showing exciting combinations on bars. If healthy, she would be an immediate boost to a Georgia lineup that peaked at only 49.200 in 2022.