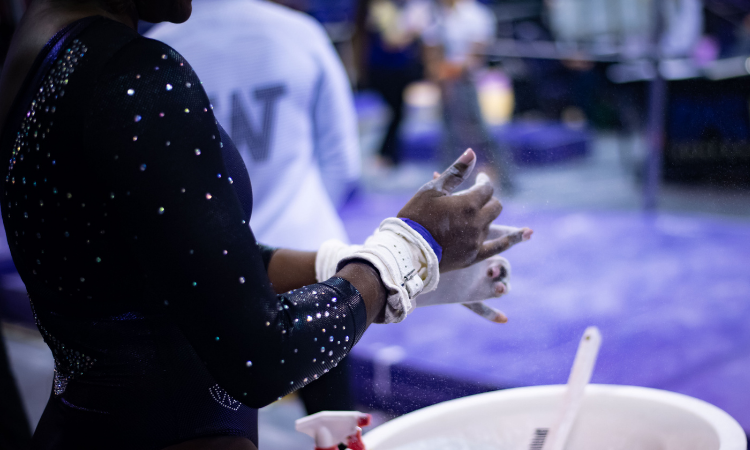 Since its inception in 2015, Brown Girls Do Gymnastics has been at the forefront of advocating for increased diversity and inclusion in gymnastics and acrobatics communities. One of the organization’s primary goals has been establishing gymnastics programs within the extensive network of Historically Black Colleges and Universities.

Fisk University in Nashville is among the most prestigious HBCUs in the country and recently became the first to sponsor varsity women’s gymnastics. BGDG representatives helped Fisk’s administration navigate the hiring process, and in March the university announced that Corrinne Tarver had been selected to lead the inaugural program.

The timing was perfect: With their daughter about to start middle school, Tarver and her husband had already been discussing her return to full-time work as well as the possibility of moving down south to be closer to family.

“It’s funny, everything kind of fell into place all at once,” Tarver said. “I wasn’t expecting it, but it was like, ‘Oh, wow, OK!’”

It’s no surprise that Tarver, one of the great trailblazers of NCAA women’s gymnastics, would make the shortlist to lead this groundbreaking team. Her gymnastics resume is deeply impressive and teeming with firsts: A two-time U.S. national team member, she was the first Black gymnast to compete for the University of Georgia and the first collegiate gymnast to perform three double saltos in one floor routine—including the first double layout.

In 1987, she helped lead the Gymdogs to their first national title, becoming the first team other than Utah to win the sport’s top prize. Perhaps most memorably, in 1989 she became the first Black NCAA all-around champion. Tarver finished her career at Georgia with nine All-America honors, two team and two individual national titles and a lasting legacy as one of the all-time great Gymdogs.

Tarver not only has a distinguished gymnastics background but also a wealth of professional credentials and experience that make her uniquely qualified for her new role. She has over 30 years of coaching at the club and collegiate levels, including a stint as an assistant coach at the University of Pennsylvania. Outside of gymnastics, Tarver worked as an athletic administrator at Syracuse and Stockton Universities and earned a Juris Doctorate from New York Law School in addition to her bachelor’s degree in social work from Georgia.

Currently, Tarver is hard at work putting the numerous necessary pieces in place before the team’s 2023 season debut. Staffing announcements should be coming soon, as well as formalizing in which conference the Bulldogs will be competing. She expects the first season to be mostly away meets since programs typically finalize their competition schedules months (if not years) in advance, meaning the burden to travel will fall on Fisk.

Perhaps Tarver’s most daunting task is fielding a full roster by competition time. She knows she’s late to the recruiting game, so her strategy must be deliberate and focused. For now, she’s concentrating her efforts on event specialists who might otherwise be relegated to a walk-on role at more established programs. She’s also willing to consider current college seniors who want to spend their COVID year at Fisk.

“If they did four years somewhere and want to do a year here now, absolutely! It would be great to have that leadership, people who have already been through the process and understand it.”

Though Tarver describes her years in Athens as “one of the best experiences of my life,” she recalls being stunned by some of the stories she heard from fellow Georgia students.

“I think I got a bit of a pass because I was an athlete in a high-visibility sport. [Georgia gymnastics] became a household name, and we kind of quickly got celebrity status, so I didn’t feel the same disparity and difficulties that other athletes or even other people of color did,” she said.

The last few years have brought into even sharper relief the ongoing obstacles facing gymnasts of color. In 2022, the public scrutiny leveled at the Bruins’ coaching staff—culminating in head coach Chris Waller’s resignation—served as proof that no program is immune from the deeply rooted racism affecting the NCAA.

Fisk gymnastics is not a magic solution to that or any other of the sport’s systemic issues, but it is proof that the status quo is evolving. Who better than Tarver to help usher in a new era of college gym?

“You can come to an HBCU and get a good education and still do gymnastics,” Tarver said. “I’m excited that we can give that opportunity to this generation because we didn’t have that option.”

Like what you see? Consider donating to support our efforts throughout the season.