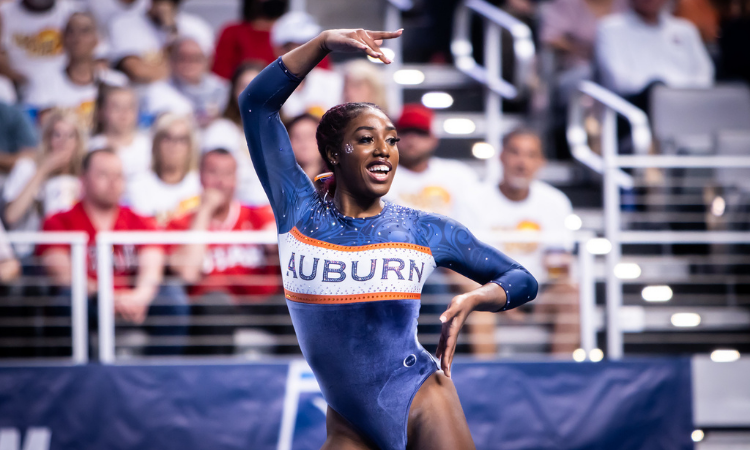 We talk a lot about covering gymnastics like its mainstream counterparts. But the sport is pretty similar to the likes of football and baseball already. In this article, we’re taking a look back at the 2022 season and calling out nine moments that are right out of the “ball sport” playbook—from Gatorade baths to trolling in Twitter replies.

Jay Clark has his faults, but his handling of the Alexis Jeffrey transfer situation—in particular his press conference—was, dare we say, handled very very well. It covered all the bases, didn’t shy away from hard topics and basically answered every question then-UCLA head coach Chris Waller failed to at his own press conference (if we can even call it that) a few days prior.

One of the best things to come out of Auburn’s rise to immense popularity this season—besides the obvious—was Auburn fans (like fans of all things Auburn, not just gymnastics) trolling in the replies of opponents’ tweets upon losing to the Tigers during the regular season. Entertaining and all in good fun, it’s a true sign of the sport’s growth when more people tune in, not because they are a fan of gymnastics, but because they are a fan of a school and want to see that school succeed at all costs.

While this point doesn’t necessarily fit our specific criteria, we can’t not bring up the fact that the NCAA gymnastics national championships were moved to a 1 p.m. ET start to accommodate ABC’s NHL game of the day—then went on to outperform said hockey game. We think that’s pretty neat.

Auburn introduced loads of new leotards this year to the SEC, with one in particular catching the eye of hockey fans. Not sure where hockey and college gymnastics overlap? The leotard from the famous 198.575 night’s reference to an older staple rings familiar to the NHL’s Reverse Retro campaign. Leading into the 2021 season, each team was allotted a completely new uniform, with the caveat that it needed to look like a design plausibly brought back from decades past. Ozone’s new take included sublimated swirls and plenty a rhinestones, while still maintaining the block text and navy body that made the original iconic within the program.

High profile “ball sport” athletes love blasting the media for doubting them and their teams. This year, KJ Kindler and Oklahoma did the same thing with this iconic moment from their nationals-winning press conference. We think Tom Brady and his peers would be proud.

After Celestine’s foot became an object of hot debate after the Raleigh regional final, since whether or not she stepped out of bounds was hard to see on TV. She was a good sport and played along—and it got media attention, too.

Quietly dropping a resignation when a firing seems imminent is a classic ball sport coach move, right down to the “I’m pursuing other opportunities” statement.

Gymnastics seems to love to think it’s special for hating and constantly questioning judging, but the truth is that griping about officiating is a favorite pastime in most sports. Take the outright hatred for Scott Foster’s officiating in the NBA. He was trending on Twitter for a controversial call just last week.

This is how ball sports celebrate milestones like making nationals as a team for the first time in six years.

READ THIS NEXT: 6 Assistant Coaches Ready to Make a Move in 2023 or Beyond