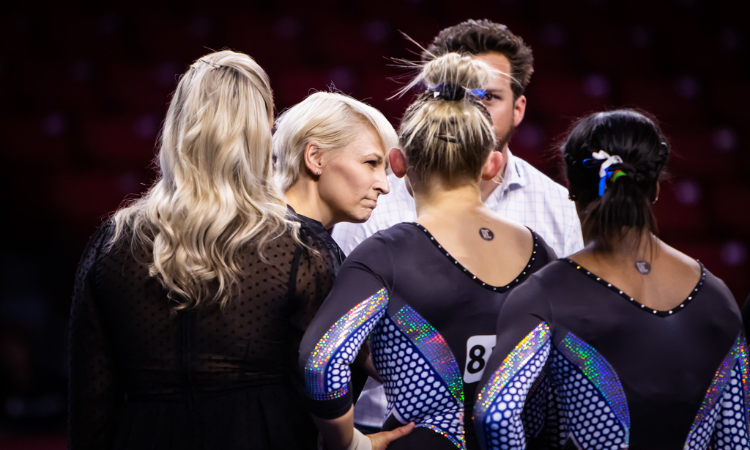 On Tuesday, Utah State head coach was announced as Clemson’s first to lead the new program. And with the announcement have come a number of questions—from who will replace her at Utah State to recruiting, allegations of abuse and more. We discuss some of those in this week’s roundtable.

What was your initial reaction when you learned Amy Smith was the Clemson hire?

Emily M: I was a little surprised! Smith’s name has been tossed around for a few vacancies lately, but I didn’t realize she actually had any aspirations of leaving Logan just yet, and since gymnasts have so recently spoken out against her coaching. It makes a lot of sense outside of that, though, since she has such a strong resume and previous experience in the region from her time at North Carolina.

Elizabeth: She’s not my ideal candidate, but she’s not the worst name I heard rumored to want the job either. I think she’s a solid if not incredibly exciting hire for the Tigers.

Tara: I was definitely surprised to see her leave Utah State! It makes sense given the success of the Aggies recently—including the team’s first MRGC title this past season—but I just didn’t see her leaving Logan quite yet. She’s definitely a solid hire for Clemson, albeit somewhat unexpected.

Jenna: I was a little surprised as I had thought of her more for the UCLA position than Clemson, and I was also nervous after seeing some allegations against her from former gymnasts on Twitter (more of which came out after the hire was announced). People can change, but I hope Clemson thoroughly vetted her to ensure that whatever was happening to cause the large amount of roster turnover at Utah State won’t be brought to the new program.

What next steps do you hope to see in the coming weeks from Smith and Clemson?

Emily M: Recruiting, recruiting, recruiting. Clemson needs to go zero to 60 on filling out a roster. This is a program that wants to be competitive off the bat, and it’ll need talent to do that. The class of 2024 can start to verbal on June 15. Clemson is already behind on recruiting the class of 2023. Level 10 nationals start May 13, and it is a hotbed for recruiting. Smith will need to be front and center and making connections. A few big transfers wouldn’t hurt, either.

Elizabeth: Since the class of 2023 will be Clemson’s freshman class, Smith is already starting behind every other top team in the country when it comes to recruiting. I hope she is prepared to hit the ground sprinting. She has a lot of ground to make up, and with the class of 2024 eligible to start contacting coaches and making verbal commitments in June, she’ll have to pull double duty this summer. In an initial radio interview, Smith mentioned targeting transfers as a result of stacked COVID-year rosters. I think that’s a smart idea. She should also look to flip some already-verbally-committed recruits who may have wanted to go to Clemson before it became an option.

Tara: I sound like a broken record after Emily and Elizabeth, but RECRUITING. It was crucial for Clemson to hire its head coach before level 10 nationals in May to capitalize on that opportunity before the class of 2024 can start verbaling in June. Not to mention that it’s already behind on the class of 2023 and will want to get recruits for its inaugural season ASAP. Clemson athletics has quite the reputation, and if it wants to be competitive, starting as early as possible is ideal.

Jenna: The others have recruiting covered, so I’ll mention scheduling. While most schedules aren’t finalized until a few months before season, it would be great to see Smith line up some exciting matchups against highly ranked teams in order to draw fans and eyeballs to the meets. The SEC is an obvious choice due to proximity and the ACC-SEC rivalries that exist in other sports, but Oklahoma and UCLA should also be high on the priority list.

What questions do you still have about Smith or the program?

Emily M: Utah State is a program known for losing gymnasts from the roster. That was true before Smith, and might just have something to do with a traditionally huge roster at a more remote campus (which, while it appeals to some, is likely not for everyone!), but it’s something to keep an eye on. A few former gymnasts have also spoken out against Smith, and more have spoken up since the announcement was made. It’s not a squeaky-clean hire.

Elizabeth: I’m primarily concerned about the abuse allegations that have been brought up this week, so I’m wondering how Clemson is going to address those—or not. I’m also curious about assistants. I think she could go one of two ways: a bigger name that would bring publicity or an experienced name with big team expertise.

Tara: Like Emily said, Utah State is known for losing gymnasts from the roster, which is slightly concerning. It could be totally unrelated to coaching since it did happen under Walsh before her, but some former gymnasts have spoken out against Smith as well.

Jenna: To be honest, I’m having a hard time thinking about much else besides the athletes that have spoken out against Smith since the hire was announced, and I wonder how (if at all) Clemson will address it.

Who do you hope to see fill the head coach role at Utah State?

Emily M: This is a fun opportunity for someone to make a move into Division I coaching. Maybe someone like Kristen Harold from Texas Woman’s. I wouldn’t mind Dave Kuzara returning to a head coaching role, either, although it’s possible that his removal from the Denver roster was simply a retirement.

Elizabeth: Rebecca proposed current assistant coach Stephen Hood taking over, and I’m sort of here for it. He did a great job at Texas Woman’s, and Utah State did well under him in 2022 as well. Maybe he and Abby Milliet working in tandem?

Tara: Should Josh Nilson want to return to Utah State in a head coach role, he could be a good fit. He did his undergrad at Utah State and previously held an assistant position there before taking over the Temple program. It would also be a great opportunity for Kristen Harold or Chris Muras to take the helm of their own program.

Similarly, who do you think would make a good assistant hire at Clemson to fill out the staff?

Emily M: This is tough. Because of the heavy recruiting need, Smith will want support in that area. She has connections all over the country, but hiring someone with recent local knowledge wouldn’t hurt. I’d sort of like to see a high-level level 10 coach from the region join the staff.

Elizabeth: I discussed this a bit above, but I think it needs to be someone who either has marketing or grow a fanbase experience—someone with big team/Power Five conference chops—or someone that would bring attention to the program because of their name or popularity. Especially if there’s any sort of negative PR that rises around Smith.

Tara: Hmmm. Someone with local connections would be good, maybe a known level 10 coach like Emily mentioned. Adding a successful assistant from a DII program or smaller DI program would also be nice.