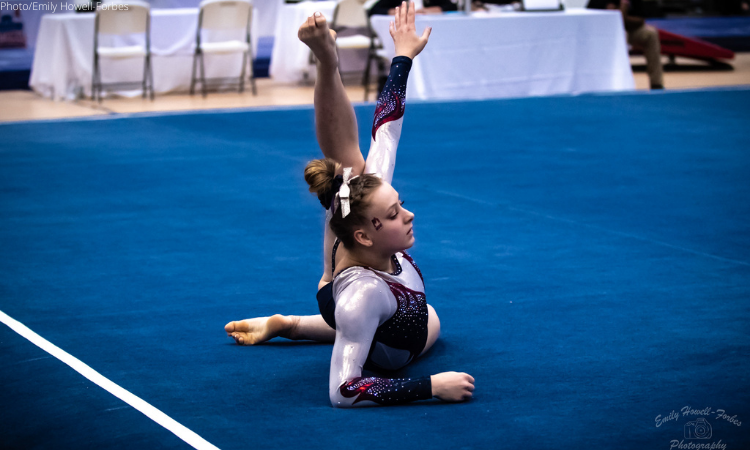 For this week’s roundtable we thought it would be fun to look at college gymnasts through the lens of other sports. Which gymnasts would make good soccer players? How about divers? Track & field stars? Have an opinion about a gymnast that would excel at another sport? Let us know in the comments or on social media!

Let’s start with an easy one. Which gymnast do you think would make a good diver?

Katie W: Trinity Thomas would have to be my pick here. I remember hearing she competed in diving competitions in high school, and the combination of her power and grace will certainly translate well.

Kathleen: I would go with Andrea Maldonado. She has great twisting form and isn’t afraid to go for big skills, so I think she’d be a great fit for diving.

Claire: Missouri’s Alisa Sheremeta has the necessary power, poise and twisting form as evidenced by her Rudi bars dismount.

What about track & field? Remember that includes not only sprinting but events like pole vault as well. Take your pick.

Katie W: Sarah Edwards has a great pop off the vault table and is one of the faster runners leading into her tumbling passes.

Kathleen: Sarah Edwards! Every time she vaults I am stunned by how fast she runs. I think she’d be great at sprinting, but her beautiful leaps and jumps on floor could help her be a great hurdler as well.

Claire: In addition to her excellent gymnastics fundamentals, Nia Dennis has a great run—even stride, quick steps and no wasted motion.

Katie W: Lynnzee Brown is extremely powerful, and I think the power behind her tumbling would be great behind a soccer ball.

Kathleen: Kennedy Hambrick. I’m honestly not entirely sure why, but I have a feeling she’d be an outstanding soccer player. I think she has the fight and determination to push through a 90-plus minute game, and she’s shown a lot of technical precision that could make her a dangerous force on the pitch.

Claire: Georgia’s Rachael Lukacs not only has the toughness, athleticism and power required, but is also such a team-oriented gymnast with a great head for strategy.

Katie W: Mercedez Sanchez has a great work ethic, and I think she’d make for a solid tennis player. In addition to her insane flexibility and gymnastics background, she has competed in Olympic weightlifting competitions. A true all-around athlete!

Kathleen: I’m gonna go with Milan Clausi. She does everything with so much grace, power and precision, and I think that would transfer well to drilling a serve right out of her opponent’s reach. Plus, with a name like Milan, being good at a “preppy” sport like tennis is her birthright.

Who would excel at golf?

Katie W: We’ve seen so many gymnasts give golfing a try. I keep leaning toward Alyssa Baumann because she’s one of the most technically precise gymnasts.

Kathleen: Ona Loper. I feel like she’s a very patient gymnast—she didn’t get to have the freshman season she wanted, but each year she worked hard and got better and better. I think that patience and resilience as she chipped away at any challenges would translate well into the slow-paced, strategic game of golf.

Claire: I’m going to cheat and say UC Davis’s Logan Clagg who—in addition to being a standout gymnast—was on her high school’s golf team. Also worth noting: The Aggies’ head coach John Lavallee teaches a PE course in golf at the university. I’ll second Ona Loper for the reasons Kathleen mentioned but also because she’s from Bluffton, South Carolina, which is a major golfing hub.

Katie W: Shaylah Scott from Illinois is one of the taller NCAA gymnasts at 5 ft 9 inches. Therefore, I think her power and height combination would lead her to be a great basketball player.

Kathleen: I’ll give this one to Nicki Shapiro, partially as an homage to her basketball-inspired beam choreography, but also because I firmly believe in her ability to move a ball down the court no matter who gets in her way.

Claire: Abbey Heiskell is that quintessential utility player who always comes in clutch. I could see her athleticism and overall reliability translating well to basketball.

What about ice hockey?

Katie W: Bailey Bunn comes to mind, and I think she has a great mindset to be a hockey player. She’s also one of the most resilient and clutch performers.

Kathleen: Rachael Luckacs. She’s obviously super powerful, which would translate well into hockey, and she’s come in clutch many times for the Gymdogs, showing she knows how to contribute to a team.

Claire: Since I know next to nothing about hockey, I’m going metaphorical and saying self-proclaimed Ice Queen Alyssa Baumann. If nothing else, she’s got the straddle flexibility to be a solid goalie, right?

And finally, choose a sport not mentioned in one of the previous questions and then a gymnast you think would be good at it.

Katie W: For some reason I felt like choosing skiing and Cassidy Ruslow. I’m not quite sure where it came from, but she has great control in her gymnastics that would transfer well on the slopes.

Kathleen: I’ll pick baseball as my extra sport, and the obvious answer is Kendal Poston. I believe she’s mentioned playing Little League a few times, and given how hard-working and competitive she is, I’m sure she could make a successful comeback to the sport—as soon as she finishes her fifth year!

Claire: I would love to see Anastasia Webb play ultimate frisbee. Judging by how she jumps and dances on floor, not to mention her height, she’d be an outstanding defensive player. For the record, there is precedent for collegiate gymnasts making great ultimate players…

READ THIS NEXT: CGN Roundtable: Elite Skills We Want to See in College 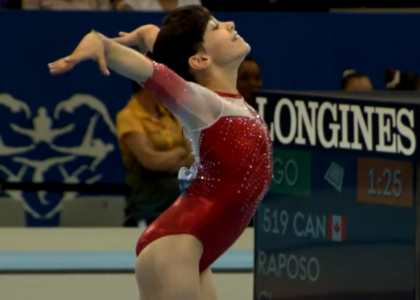