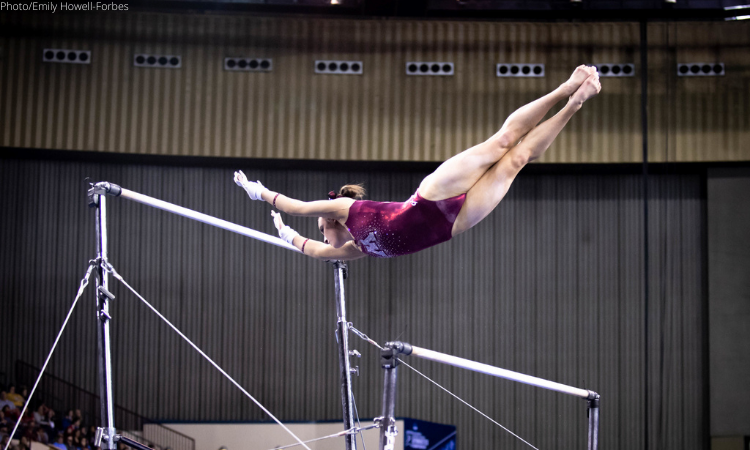 The U.S. Classic starts today! And to celebrate, this week’s roundtable is all about elite skills we want to see in college gymnastics. Whether that’s a skill that is common in elite but more rare in NCAA or something we never get to see NCAA gymnasts perform, we’re discussing all our ideal crossovers. What skills do you want to see make an appearance in college gym? Let us know in the comments or on social media!

Starting with vault, are there any vaults you wish were more common or simply performed at all in college?

Elizabeth: I can’t wait for the day we get our first Amanar in college. I don’t think it’s a realistic every week vault, but I know someone is going to do it at least once in the near future. I’d also love to see more Tsuks.

Kalley: Possibly a cliche answer, but I agree with Elizabeth: I want to see the Amanar. Just once. Do I think it’s realistic to be used often? Of course not—too many built in deductions—but it sure would be fun to see it at least once.

Katie: A good Amanar is one of my absolute favorite skills, but most cannot pull off one like Mckayla Maroney or Simone Biles. I’d like to see a Cheng make an appearance once as well.

Emily M: Good grief. Give me any non-Yurchenko entry vaults. More Tsuks! More handsprings! We see the occasional front handspring double twist, but let’s chuck a flip in there. ASac-style Rudi, anyone? I know, extremely difficult, but let me dream.

Katherine: I would love more handspring entry vaults as well. The advent of Haleigh Bryant’s front pike half reminded me how satisfying they can be.

Tavia: I would welcome any vault that isn’t a Yurchenko entry at this point! The NCAA needs a little spice added to the full lineups of Yurchenko fulls with the occasional Yurchenko 1.5. I wish more front handspring-entry vaults were competed in college, or maybe even a throwback to Courtney Kupets’ Yurchenko half-on, front pike off.

What about bars? Which skills do you want to cross over to the NCAA?

Kalley: I am just patiently waiting for Lexy Ramler to do some version of this routine in competition, specifically that Comaneci salto.

Katie: Honestly I’d be very happy if I don’t have to see a bail to not handstand again. In terms of skills I’d love to see, a Hindorff would be up there since we haven’t seen many in recent seasons. I would love to see some variety in bar releases in a lineup in general. Plus, a FTDLO is a unique and difficult dismount that is always entertaining as well.

Emily M: Give me healys or give me death. And I agree with Elizabeth, the hop full needs a comeback. Elise Ray’s hop full hop full combination plays on loop in my brain.

Katherine: I want to see more piked Tkatchev releases, as well as more release connections like Tkatchevs to Paks to Shaps.

Tavia: I’d love to see some more diversity in the single bar release department. More Ricnas, more Hindorffs, more Deltchevs! If we could bring the Bhardwaj back to the NCAA, that would bring me so much joy as well.

Elizabeth: I know what I don’t want to see and that’s the transverse jump trend to make its way to the NCAA. As for a cross-over skill I want to see more of… How about Onodis, mixed series like a leap or jump into simple back handspring or fun turn combinations like the Dutch women are so good at.

Kalley: Of all the events, I feel like beam shares the most basic skills (albeit fewer per routine, obviously). I loved Peszek’s standing back full on beam; I don’t think we would ever see that unless event finals came back, but a girl can dream. I would also love to see an Onodi mount despite the fact I can’t think of a single elite gymnast who currently does one.

Katie: I’m with Kalley on absolutely loving Pezek’s standing back full! I’d love to see more back fulls or Arabians! I think a variety of beam dismounts like 2.5 twists, back pikes etc., would also be nice, although a stuck dismount is crucial for college scoring.

Emily M: Mmm let’s make like the new COP and count rolls toward turn requirements. I want back extension rolls back. Otherwise, more mixed series (paging the Netherlands). Collegiate routines can be so formulaic for obvious “get on the beam, get it done and get off as quickly as possible” reasons, but man a good mixed series makes my heart sing.

Katherine: Let’s get some Onodis up in here! It might be the prettiest skill in all of gymnastics for me. I would also love more difficult dance elements, particularly turns.

Tavia: The return of Chellsie Memmel has me wanting to see illusions on beam in the NCAA! I also love any series that’s not a flick layout. I know that a couple gymnasts have brought their side aerial layout step outs to college gymnastics, but those never get old.

How about on floor? Are there any dance elements or tumbling passes you want to make the leap to college?

Elizabeth: I think with the difficulty level in the US getting higher, harder skills will become more common for lower levels as well, which means we’ll start seeing more than double layouts and full-ins in college. Maybe that means more Randis, double doubles and maybe even a Biles—here’s hoping! In a different vein, I’d love to see fun, simple side passes or butterfly elements seen more frequently in men’s gym.

Kalley: There is something so satisfying about a well-executed triple full, so I’d love to see more of those. Same goes for double doubles.

Emily M: I’m cheating a little because Mary Jane (Horth) Otto already brought it to Illinois, but more Khorkinas please. It’s just not necessary for gymnasts who struggle with splits to show more than the one 180 degree position that’s required. Give me a Khorkina or cat leap double or L hop full over bad Popas or wolf fulls every day.

Katherine: Double doubles! There are so many powerful floor workers capable of doing them.

Tavia: I would love to see more triple fulls and piked double Arabians! I also love a good switch ring half when they’re executed well.

Finally, in terms of elite recruits expected to compete in the NCAA in 2022, are there any skills they perform that you hope they keep around for their college routines?

Elizabeth: I want Sunisa Lee to bring her Nabieva to college. She’s one of the few that I think has the consistency and form to pull it off.

Kalley: As much of Sunisa Lee’s bar routine as she can bring, I’d love to see. It is so jam-packed with difficulty, any piece of it would be fun to see in college.

Katie: She’s not an elite recruit but has the elite level skill… L10 competitor Brie Clark debuted a Biles in level 10 this year. How awesome would it be to see her the first to compete it in college for Utah State?

Emily M: Jade Carey’s Moors can be so immaculate, I hope we see it at least a few times during her stint in Corvallis. Speaking of Moors’ sister, I will faint if Brooklyn does the Podkopayeva. Seems quite unlikely, but we need some Pod representation in college so I’ll keep that candle lit. I think at least the Moors would be a first-ever appearance of the skill in the NCAA? Slightly more realistically, I’d love to see Leanne Wong’s Chow half to mix up the Maloney/van Leeuwen parade.

Katherine: I hope Emma Malabuyo is healthy enough to bring some elite tumbling to Westwood. She has a big double double and overall amazing choreography.

Tavia: I would also like to hop on the Sunisa Lee bandwagon. If she brings any of her elite level connections to college, I’ll be more than happy! Her Nabieva and Bhardwaj are clean enough to translate to good scores in the NCAA, so I hope we get to see them! I also hope deep down that we get to see Leanne Wong’s 3.5 twist on floor. I know that one’s a long shot, but I don’t want to crush my dreams just yet.