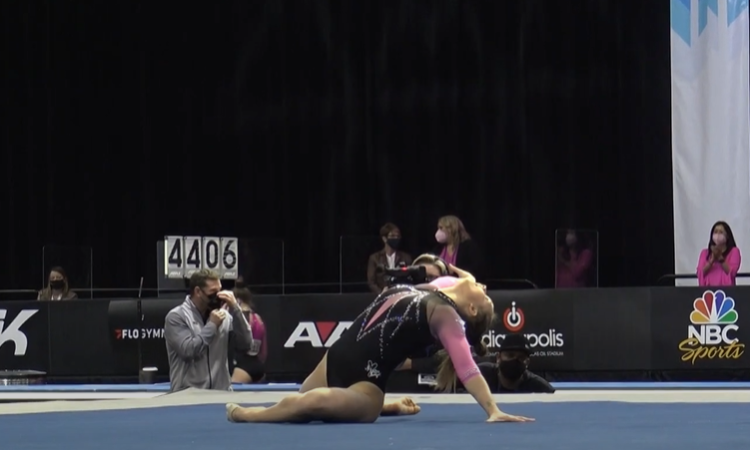 With our next recruit ratings release only a few weeks away, we’ll be talking a lot about the classes of 2022 and 2023 this summer. While the class of 2021 won’t be receiving new ratings, an entire level 10 season has passed since signing day, so we wanted to recognize the high school seniors who improved the most this year. Since the elite season is just getting underway, we’ll limit this list to level 10 gymnasts only.

We’re cheating slightly by including Blakely on this list, given that 2021 was her first level 10 season since 2016, but the future Gator’s performances, particularly at the end of the season, were among the best we’ve ever seen in level 10. Blakely was rated a 4-star in the fall based on her elite routines, but it’s clear that she is now one of the most anticipated gymnasts starting college in the fall.

Smith started training at World Champions Centre for her senior season, and a 10.0 on floor in her first meet of 2021 was the first sign of what would be a season of greatness. Her 2021 also included the Nastia Liukin Cup title, two 39-plus all around scores, a near-sweep at the Region 3 championships and a national title on floor. She only lost in the all around to two gymnasts all season: five-star Lali Dekanoidze and Momoko Iwai, who we’ll discuss shortly.

Theodorou was the first great phenom of the 2021 level 10 gymnastics season, opening her season with two consecutive 39-plus scores. Her unique Yurchenko half-on, tucked half off vault delivered big scores all season and starts from a 10.0 in college.

Loyim finished her level 10 career on a positive note, tying for third place on bars at nationals with her identical twin Emma. She’s a precise, reliable gymnast who excels on bars and beam and is poised to step into North Stars Gymnastics’ tradition of collegiate excellence. (Think Rachael Lukacs, Missy Reinstadtler and Alicia Boren.)

Texas Dreams’ Price missed the 2020 season due to injury but came back strong in 2021, finishing the season with three straight 38-plus all around scores and not scoring under 9.800 on vault all season. Unfortunately, Price had a painful-looking fall on floor at regionals and did not attend nationals despite qualifying, so we’re not certain about her current injury status.

Hudson was unrated in 2020 due to a lack of available video footage, but her excellence in her senior season means that she would almost certainly be a five-star recruit were we to re-rate her class now. She had only one all around score below 38.500 all season, exceling particularly on floor where every 2021 score was between 9.675 and 9.775.

Texas Dreams’ Iwai was unrated in 2020 due to injuries and a lack of scores, but she returned triumphantly in 2021 to assert herself as one of the class’s top recruits. Her 10.0 on bars obviously highlights an area of strength for the senior, but the Texas state champion produced reliably high scores on floor too.

Towson has been a powerhouse on the recruiting scene for the last few years, and Hong, this year’s Texas state bars champion, is poised to be a superstar for the already-rising Tigers. While her bars is most reliable and she has the highest peak on floor, she could plausibly compete all around in college.

Leigh hasn’t scored under 9.000 on floor since the first week of 2019, and she’s always been one of the country’s top recruits on that event where she boasts a Randi. Last year her other events held her back from reaching the three-star cutoff last year, but she made major strides this season particularly on bars.

Gilley produced a huge 38.550 in the all around and a 9.925 on bars at her home invitational this year. She also won every event but bars at the Indiana state meet and picked up a regional floor title.

After a patchy level 10 career where she didn’t regularly compete all around, as well as an injury that cost her her 2020 season, the future Buckeye finished her senior season hot. She delivered four consecutive 38-plus scores, winning two regional titles and setting new career highs on all four events and in the all around.