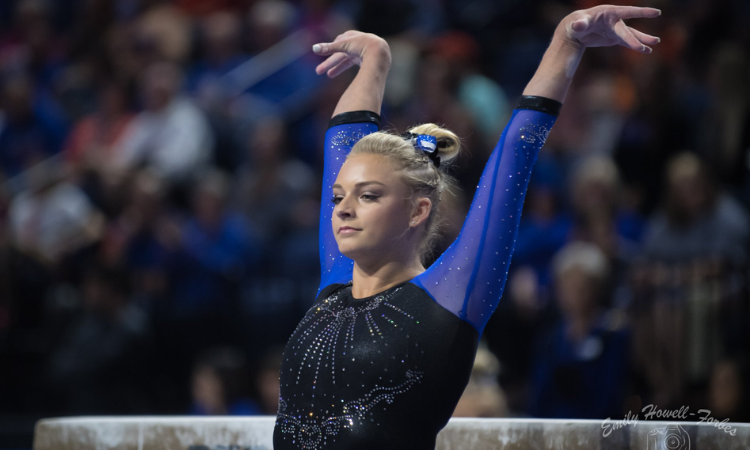 When Alyssa Baumann landed her bar dismount in the 2021 national team final and burst into tears, many thought they were witnessing the end of her collegiate career. At the time, she herself remained uncertain about whether or not she wanted to come back for a fifth year of gymnastics.

“During season, I told the coaches that it’s on my mind, but I don’t really want to think about it until after season. I just want to give my full attention to this season,” Baumann said. “Afterwards I’ll sit down and think about it all, I’ll make my little list of pros and cons, I’ll just deal with that later.”

After season ended, Baumann took over two months to make her decision, as there were several factors she needed to take into account.

The primary one was whether her body could handle one more year of gymnastics. “I knew that I’m not getting any younger, so I wanted to see how this season went on, how my body felt throughout the season and if I felt fulfilled at the end of season,” Baumann said. “I thought we had a great season, but postseason didn’t end the way that I wanted it to, so I took that into account when I said if I could do it physically and mentally.”

Additionally, her academic goals factored into her delayed decision, too, as Baumann waited until May to see if she got accepted into the University of Florida’s business management graduate program. “I didn’t want to make a decision without knowing if I got in, but once I got accepted, I decided that I want to do gymnastics again,” she said. “I love this sport and I love doing it, so it was a matter of, ‘Do I think that I can handle it at 23 years old?’”

The answer was positive, as Baumann’s senior year was the best of the four she spent as a Gator: She flirted with perfection on beam on a weekly basis and competed bars for the first time since 2016. “This year I felt the best that I have felt throughout college, my body felt its best, my arms were able to take bars [and] I was able to train much more consistently,” she said.

Instrumental to her success were some changes in her training, as Baumann started to include fast running into her schedule and limit her numbers in the gym. Thanks to running she was able “to come in and take a lot more landings,” she said. “I’ve dealt with shin splints my entire career, and this was the first year that I didn’t have any problems with this. I’ll definitely keep up the running.”

Focusing on basics and conditioning, rather than on repetitions, also helped her. “I’ve done gymnastics so long, I know how to do the skills, so it’s more about staying strong and doing some mental routines,” Baumann said. “I don’t need 10 bar routines a day, I don’t need 10 vaults a day, I just need to be strong enough to be able to handle those landings when I do them, making the best of every turn.”

Given how well her body is doing, Baumann is already thinking of some upgrades for 2022. “I know that everyone wants to see the double layout [on floor]—everyone asks me about that every single time,” she joked. She will train it, she added, as it could award her half a tenth or even one tenth more in execution, “but it’s risk versus reward at that point, so I’m going to train it and I’m going to see what happens.”

She also wants to prioritize her Yurchenko 1.5 on vault to help her team because “no matter how many one and a halves or double layouts you think you have, by the end of season everything changes, especially with injuries and everyone being worn down; you want to have backups.”

Finally, she wishes to bring back her Onodi on beam, which she hopes will help her achieve that elusive perfect 10.0. Although Baumann assumes that it is some loose form on her dismount that has prevented her from achieving that perfect score, she believes that “maybe adding an Onodi will bring a little bit more of a wow factor into my routine that will help me reach that 10.0.”

Having failed to achieve that perfect score this past season, as well as other team goals, such as winning an SEC championship title and a national title, have all factored into Baumann’s final decision to come back for one more year of college gymnastics.

Next year, she believes, may finally be the Gators’ year, as Florida is welcoming one of the best ever freshmen classes in the history of the sport, which will include world champions Morgan Hurd and Riley McCusker, U.S. junior champion Leanne Wong and level 10 star Sloane Blakely.

“The potential is through the roof for next year,” Baumann said. “I’m really excited for possibly five new freshmen coming in. They’re all phenomenal, so lineups are definitely going to be tricky. It’s going to be hard to make them, which is going to push the team a lot more.”

“I was excited to see some of the girls competing at the U.S. Classic,” she added. “Knowing that we have all of that talent coming in this year is really exciting.”

Five years ago Baumann was one of those talented elites who competed in the hopes of making the Olympic team. Her elite experience and her transition from elite to college will make her an ideal mentor for the young freshmen arriving on campus in the fall, which is a role the coaching staff has envisaged for her, too. “The coaches wanted me to be there to guide the younger girls next year,” she said.

“It’s definitely a big transition from elite to college—I didn’t think it was going to be as hard as it was,” Baumann added, reflecting on both her personal experience and her mentorship role next year. “Time management is going to be a big thing, [as well as] trying to form relationships with them. … I’ll be able to help them around campus figuring everything out, [especially] the time management portion—I think that’s going to be the biggest thing.”

Baumann also hopes that she will be able to help the new freshmen see that it is possible to be successful in gymnastics and still enjoy the sport, which is something that she didn’t understand before starting college. “I don’t even think that I was able to enjoy it as much as I did when I was a kid as I do right now,” she said. “Elite and college are two completely different things, especially the elite world where I came from, so college has been the biggest blessing to me, and I was able to see gymnastics in a completely different light.”

“My coach Jenny Rowland really agrees with me that you can have fun and you can form relationships and love what you’re doing and be successful,” Baumann added. Thanks to her degree in sports management, she hopes to work with athletes in the future and help them realize that “you can [both] enjoy yourself and be successful in your sport.”

Ending her gymnastics career next year is going to be extra special for Baumann, as her sister Rachel, who will be a senior at Georgia, will graduate at the same time. The sisters were supposed to overlap in college for only one year, but since Rachel joined the Gymdogs a year early and Alyssa is now taking a fifth year, they are spending all four years of college together.

Despite some inevitable jokes—“You couldn’t even give me one year of a break!” Rachel told Alyssa—the two sisters are delighted to share the experience.

“It’s so fun. I love competing with her, and I love being able to watch her. It brings a little bit more competitiveness to both of us, so we’re able to play with that and we’re able to push each other with it,” Baumann said. “Just having that support with someone who’s going through the same things at the same time is really special, and I’m excited to see what she does next year.”

READ THIS NEXT: For Megan Skaggs, Fifth Year Is for the Love of the Sport