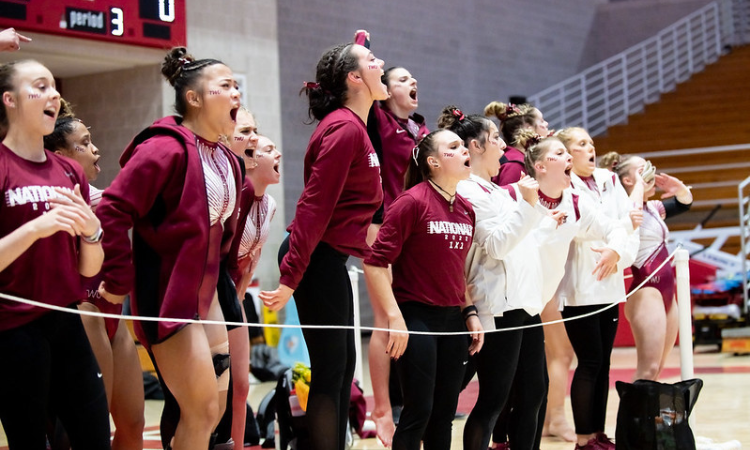 USAG teams raised the bar heading into week two. With all the teams back in action, we’re reminded that these teams will keep you on your toes and to never count anyone out until the last salute. West Chester proved that by improving its team score by just over six-tenths of a point in two days, during a trip to Alaska. Lindenwood went stick for stick on bars, just in case you were thinking of taking your eyes away yet this season.

Let’s look at the memorable moments, and the meets you’re going to want to rewatch.

There’s something so soothing and satisfying about something simple done so well. Much like peeling a sticker off something without trouble, remembering a password on the first try, this set from Bridgeport’s Abigail Kenney is chicken noodle soup for the soul.

West Chester wraps up its trip to Alaska in style, with some dancing and lip-syncing to round out the successful weekend of the Golden Rams growing their team score each week. And with 14+ Golden Rams making an appearance each week so far, this team has the depth and talent to brighten your screens on and off the mat.

Lines of the Week

Asta-Sollilja Farrell made her Brown debut in style as the bar anchor. Not only did she hit her routine, but she made it look effortless. There are plenty of Shaposhnikova to pak salto connections in the NCAA but few are as smooth and lovely as Farrell’s.

What Is the Score?

Gymnastics fans are no strangers to live scoring link malfunctions. This weekend, Centenary’s final team score was listed differently on live stats, Road to Nationals, and in the school’s press release. Maybe one day we’ll know.

Why Should You (Re)Watch? This Ivy League battle never disappoints. After a slow start on bars, the back half of the Bears’ lineup went on a stick spree, culminating in Asta-Sollilja Farrell’s anchor routine that brought the house down. Yale standout performances included Raegan Walker on vault, bars and beam, as well Gigi Sabatini in her vault debut.

Are These Teams Trending Up or Down? Yale is on the upswing after its somewhat shaky start to 2023 in its season opener last weekend. It’s too soon to tell for Brown. Its score was mainly hindered by counting mistakes on multiple events, but there’s no evidence that that will be a trend moving forward.

Why Should You (Re)Watch? Lindenwood captured a victory on the road after putting on a stick clinic on bars. Particularly the duo of Hannah Appleget and Hannah Moon stood out among the rest. Is this matchup indicative of what conference championships will look like in March? Only time will tell. What began as a runaway meet for Lindenwood ultimately came down to a few tenths as Illinois State’s floor team showed out from start to finish. Jaye Mack brought it home with a sky high piked full-in.

Are These Teams Trending Up or Down? Lindenwood’s stock continues to rise. While Illinois State’s consistency on bars and beam isn’t at its best just yet, the Redbirds continue to show flashes of their potential for high scores when everyone hits.

Why Should You (Re)Watch? No. 28 Arizona pulled off the upset of the weekend, taking down No. 15 Illinois. Alysen Fears stood out on bars while Malia Hargrove stunned on floor. Texas Woman’s stepped up to the plate with strong performances from Ruby Goad, Daisy Woodring and Mara Johnson.

Are These Teams Trending Up or Down?: Texas Woman’s is on the rise, improving in consistency in Week 2.

The Big Storyline: Lindenwood came away with the three-tenth win after Illinois State was forced to count two falls on bars. Lindenwood was able to hold off a charging Red Bird’s floor lineup with a strong beam lineup of its own.

Implications: This will increase the Lion’s confidence heading into the rest of the season, leading this conference matchup from start to finish. The number of stuck dismounts really impressed for the second week of competition. Illinois State will want to improve on its bar rotation in the coming weeks. However, its beam and floor rotations were a highlight.

Current Rankings: No. 40 Lindenwood at No. 41 Illinois State

Why You Should Make Time to Tune in: Lindenwood and Illinois State are constantly at a battle at the top of the MIC rankings throughout the regular season. While 2022 was more Illinois State-dominant, the Red Birds ultimately fell to third, just behind the Lions, at the conference championship. If Week 1 is any indication, 2023 is going to be another competitive year between these two teams.

Need More Proof? Illinois State and Lindenwood each have competitors that have competed at the highest stage, NCAA nationals. Gayla Griswold’s Yurchenko one and a half has scored as high as 9.975. Angelica Labat is a solid all-around competitor, but particularly stands out on vault and bars. Her amplitude on her release moves is next level. Jaye Mack became the second individual national qualifier for Illinois State on floor last season. She combines fun dance and a sky-high full-twisting double pike to keep the crowd engaged.

Centenary and Greenville at SEMO 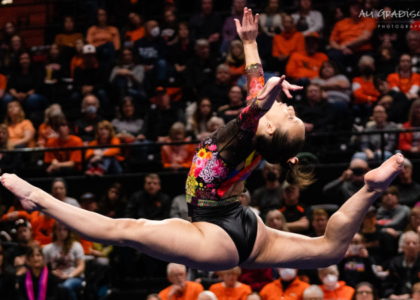