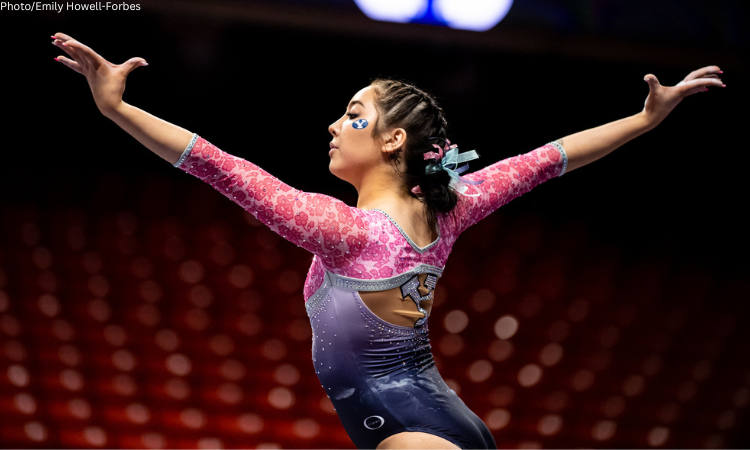 Last fall we released our signing class rankings for the class of 2022, but a lot has changed in the 11 months since. Level 10 signees competed in their senior season while their elite counterparts had national and international appearances. There were also commitment changes, retirements, injuries and new signings that altered the incoming classes. Now that the majority of the freshmen are on campus and training for the upcoming season, it’s time to take another look at the makeup of each team’s newcomer group.

While last year’s signing class rankings were derived solely from data and our recruit ratings system, this new ranking is much more subjective, taking into account senior year performances and training footage.

BYU’s signing class was ranked 22nd last fall, but the Cougars have since added three members in Wisehart, Lealaogata and Hunsaker. Eaquinto, Raesly-Patton and Wisehart all have the potential to be immediate contributors on multiple events, especially considering the high number of routines BYU is losing from last season. Lealaogata will also be a strong competitor on bars, and Hunsaker will add depth on multiple events.

Arkansas’ signing class was already strong before the late addition of Gard, a former member of the class of 2021 who competes an Omelianchik on vault and is also a possibility to make the floor lineup. Swaney, Pratt and Drotar all excel on bars, an event that could use a refresh after the inconsistencies of last season. Williams is particularly strong on vault, where she scored as high as a 9.900 in level 10, and could also see time on floor.

LSU has the smallest class in this top 10 list, but it packs a punch. Wilson closed out her stellar level 10 career by winning the Region 3 all-around, vault and beam titles, followed by a runner-up finish on vault at nationals; she’ll likely be a regular in the vault and floor lineups, as well as add depth on bars and beam. Beard is known for her fantastic execution on beam and floor, though her injury status is currently unknown following shoulder surgery in the offseason. Cowan should immediately make an impact in the bar lineup as a two-time national champion on the event.

Smith needs little introduction after winning the Nastia Liukin Cup and having a national title on literally every event; expect her to feature in all four lineups very early in her career. Zsarmani was unrated at the time of her signing but her scores exploded in 2022, culminating in second-place finishes on bars, beam and in the all-around at nationals. She’s likely to challenge for spots in the bars and beam lineups immediately, but she can’t be counted out on the other events either. Kellerman has all-around potential, but her most likely contribution in her freshman year will be on vault thanks to her strong handspring front pike half. Beaufait will also add depth on beam and floor.

Harris has been one of the most anticipated level 10 stars for several years, and she was the highest-rated recruit in the class of 2022. Her training footage from this fall has looked college-ready, so expect her to be an immediate all-arounder for the Bruins. Alipio wrapped up her elite career with possibly her best season ever; her best event is beam, but she is a realistic option on all four events. Anyimi has won regional titles on vault and beam while Wren is a possible contributor on vault and bars.

Morgan should be a recognizable name to fans of the US elites, but she should make a bigger name for herself at Michigan, with beautiful execution on all four events that will score very well in college. Thaxton’s senior season was cut short due to injury, but she is a possibility on all four events, particularly standing out on vault and bars. Clapper had a fantastic senior season, topping out at 38.925; she and Lipetz should both be depth options on bars and beam.

Cal lost a large and decorated senior class to graduation, so replacing those routines will be a tall task. This freshman class is certainly up to the challenge, though, with Aderinto, Brown and Frazier all being potential all-arounders. Frazier is the most recognizable name of the bunch following her long elite career, but Aderinto and Brown had very strong level 10 careers. Silvers is joining in January but has the potential to be an immediate contributor on floor.

Georgia’s freshman class oozes potential but also caution, as several of its top members have missed multiple seasons due to injuries. However, preseason training footage has abated some of those concerns. Scott was a late addition to this class, switching her commitment from Florida after injuries kept her out of elite competition. She is an exciting prospect at the college level, particularly on bars and beam. Posen is another former elite with a history of injuries, but she competed level 10 in 2022 as a bars and beam specialist, so it is likely we will see her on those events at UGA as well. Howard is a former level 10 national champion on bars as well as a runner-up on beam, but she could make the other lineups. Moran has not competed since 2019, when she won a national title on bars, but she has been featured in preseason footage, so it appears she may finally be healthy. As for the leg events, Fitzgerald, King and Williams will add plenty of depth.

Alabama’s class features a mix of former elites and level 10 stars. Gladieux is a very realistic all-around threat, even with the Crimson Tide’s deep roster. German is recovering from an injury but should be featured deep in the bars and floor lineups once healthy. Fellow former elite Little excels on bars while Lewis is a national champion on beam. Gravier adds depth on all four events, and Rybicki could be a standout on floor. Overall, this is a large and deep class that will form a significant portion of Alabama’s lineups for the next four years.

What was already a stellar signing class became even more impressive with the late additions of Sorrento and Trinidad. Canadian elite Sorrento is a potential all-arounder but especially shines on bars while Trinidad is known for her beautiful beam work. Roberts has won an all-around national title in level 10, and Stanford fans should be particularly excited to see her in the vault and floor lineups. Nguyen also excels in the leg events and could be a new crowd favorite with her Yurchenko double twist. Dean and Carter balance out the class as excellent prospects on bars and beam.

READ THIS NEXT: Joscelyn Roberson Commits to Arkansas for 2025 Season