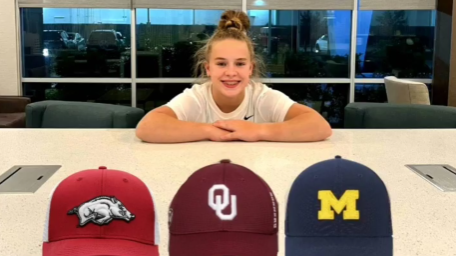 Joscelyn Roberson, a four-star recruit from the class of 2024 who trains at World Champions Centre in Texas, has announced her commitment to Arkansas for the 2025 season. After official visits to Arkansas, Michigan and Oklahoma, she thrilled Razorback fans by announcing her decision on Tuesday afternoon.

Arkansas is the closest NCAA Division I gymnastics program geographically to her hometown of Texarkana, Texas. Roberson identifies Arkansas head coach Jordyn Wieber as a childhood favorite of hers.

The future Razorback’s college decision caught the eyes of the gymternet as she hyped up her choice between Arkansas, Michigan and Oklahoma, even posting a picture with three hats, one for each potential school, and announcing the exact date and time when she would be sharing her decision on social media.

READ THIS NEXT: Norah Flatley Transfers to Arkansas from UCLA for Fifth Year