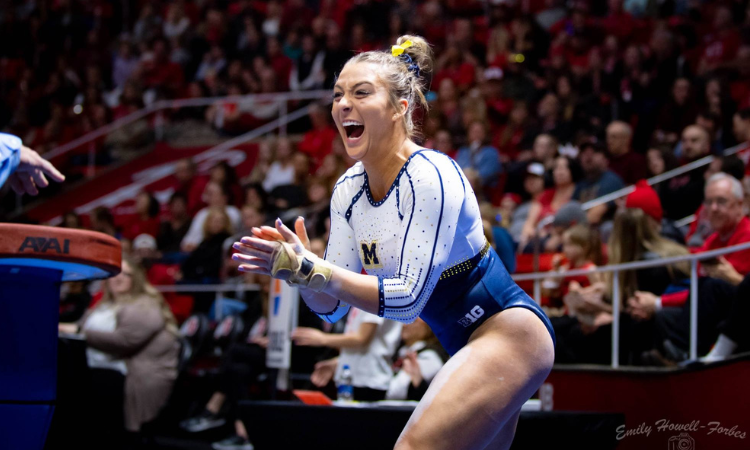 Scoring has always been a hot-button topic in college gymnastics, but discussions surrounding the issue got more heated this past year, and not without reason — 71 routines scored a 10.0 and teams reached or surpassed the 198 mark 33 times. But how do these statistics fit into the bigger picture of college scoring? Was the 2022 season an anomaly or simply the latest in a trend of rising scores? In this series, we’ll look at data from the past decade to answer these and other scoring questions.

We conducted our analysis in two parts. First, we analyzed how scoring trends changed over time for college gymnastics as a whole. To do so, we built a database of scores for every meet that took place from 2013 to 2022. We then looked at the percentage of scores that fell in various ranges, taking into account factors such as which event a score was recorded on and whether a team was competing at a home or away meet.

After looking at these general scoring trends, we compiled a database of rosters, as well as a list of teams in each conference for the past decade. Combining our scoring and roster data, we examined not only how scores changed over time but how their distribution across gymnasts and teams evolved as well. We’ll present these results over four separate articles.

In this first part of the series we’ll start our scoring analysis by looking at changes in the frequency of certain scores. To remove the effect of seasons having different numbers of recorded scores (e.g. due to being cut short by the pandemic or having fewer teams and thus fewer routines in the postseason), we examined percentages rather than raw counts. 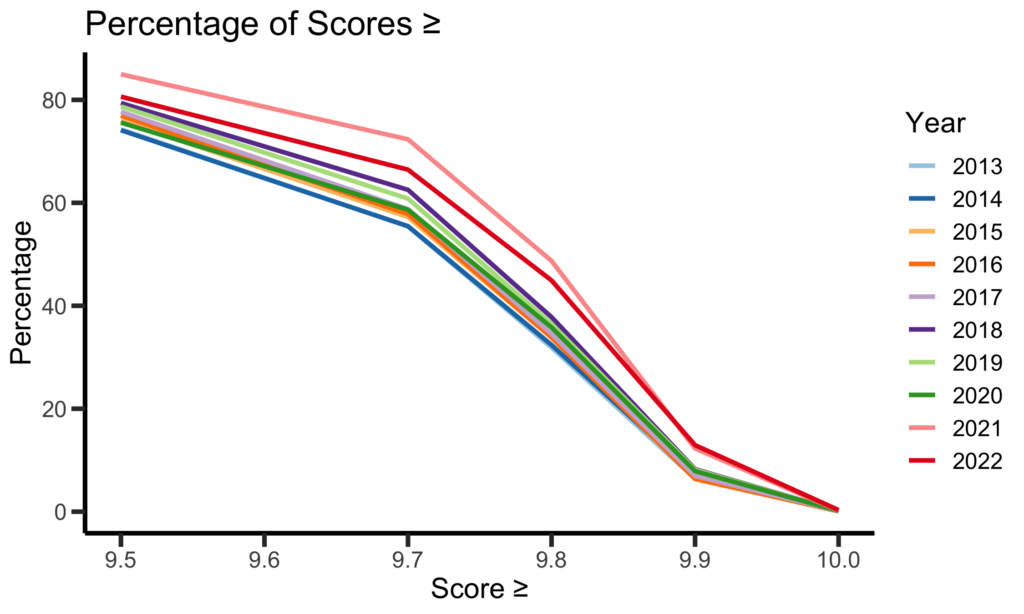 The line graph above shows the percentage of scores within a season that reached at least a certain threshold. For instance, the graph indicates that in each of the 10 seasons, close to 80% of routines scored 9.5 or better. Of note, the pink line, which represents the 2021 season, lies above the red line (the 2022 season) for the 9.5, 9.6, 9.7 and 9.8 thresholds and is nearly indistinguishable from the red line for the 9.9 and 10 thresholds, suggesting that 2022 may not have seen the most inflated scores in the last decade after all.

Stay tuned for part two next week, where we’ll break down the distribution of scoring changes for each individual event. We’ll also look at how scores changed weekly throughout each season.