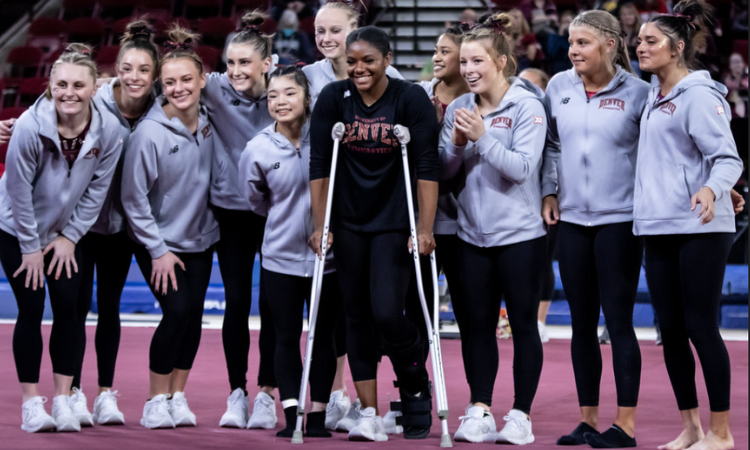 Anyone who’s followed women’s college gymnastics for more than a season has likely seen an Achilles rupture happen in real time. Achilles injuries have long been accepted as an unfortunate eventuality of the sport but seem to have become a much more frequent occurrence in recent years.

However, empirical evidence is not the same as proven fact, especially in a sport like NCAA gymnastics whose profile is on the rise. Coverage is expanding, giving viewers the opportunity to watch more meets and a larger variety of teams while also attracting new fans. A byproduct of that larger fan base is increased social media engagement, which invariably leads to speculation and rumor (when scary-looking falls or injuries happen during competition, you can bet posts speculating if it was an Achilles injury are soon to follow). In other words, it’s almost certainly true that fans are seeing Achilles injuries occur more frequently, but is that because because they’re happening more or because more people are watching more meets and posting more on social media?

Targeted research and analysis on the topic is sparse. Physical therapist Dave Tilley, host of SHIFT Movement Science, has devoted numerous episodes, blogs and social media posts to the matter.

The Achilles tear situation in NCAA gymnastics is both deeply heartbreaking & mind-boggling.

In an effort to help the gymnastics community make sense of things, here is a brain spill studying things over the last 5 years.

He also co-authored a comprehensive study on Achilles ruptures in women’s college gymnastics that was published in 2018.

Similarly, a 2020 comparative study of Achilles tendon injuries in college athletes in 16 sports found that from 2004 to 2014 Achilles injuries occurred at an overall rate of 2.17 per 100,000 athlete exposures while the injury rate for female gymnasts was 16.73. The next highest rates were men’s and women’s basketball at 4.26 and 3.32, respectively.

For context, teams typically compete 24 routines per meet. Assuming that all 81 women’s college gymnastics teams have an average of 11 meets per year, there are approximately 21,384 athlete exposures during regular season alone. If you include each team’s complete roster and tack on around 20 hours of practice per gymnast per week, it’s easy to hit (and even exceed) the 100,000 athlete exposure threshold.

Since NCAA gymnastics doesn’t yet enjoy the same level of transparency as sports like basketball or football with formal injury reports, information on injuries is often unverified and almost certainly incomplete. Since its debut in 2018, CGN’s Injury Updates page has identified injuries by diagnosis only if they have been confirmed, and otherwise lists them as “unknown” or “unspecified.” As a result, it’s likely there are more Achilles injuries than those listed, particularly less severe injuries like tendonitis or tendinosis that may just require a few weeks’ rest.

With that in mind, here’s a look at the verified Achilles injuries from the past five seasons:

Since the 2017-2018 season, 49 programs representing all three divisions and all 12 NCAA and NCGA conferences sponsoring women’s gymnastics have reported Achilles injuries. In those five seasons, 23 teams reported more than one season-ending Achilles injuries and eight teams reported more than one in a single season. Denver leads both categories with five Achilles ruptures, three of which occurred during the 2022 season.

Analytically speaking, five years’ worth of data isn’t a large enough sample to say definitively that the rate of Achilles injuries is rising in collegiate women’s gymnastics, but it certainly implies that they’re happening more frequently now than in the mid-2010s. If nothing else, it shows that gymnasts continue to be at significantly higher risk for Achilles injuries than other college athletes.