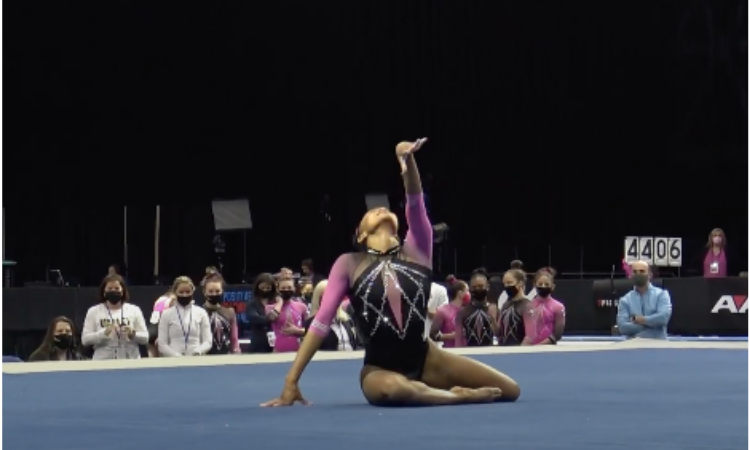 Few things in the world of gymnastics are more exciting than seeing top recruits signing with lower-ranked teams, expanding their fan base and rising to stardom there. Today we take a look at two 5-star, six 4-star and three 3-star recruits who we predict will become game changers at their future colleges.

Smith will be the second 5-star recruit to arrive in East Lansing after Skyla Schulte this year, and like Schulte, she’s expected to be a game changer for the Spartans. Michigan State competed only twice in 2021, but when the season was cut short the previous year, it was a team on the rise, showing increasingly confident and mature performances on all events. As a result, it will hope to start off 2022 where it left off in 2020. By the time Smith joins the team, star all arounder Lea Mitchell will have graduated, and Smith will be expected to replace her from day one. It shouldn’t be a problem. Her Yurchenko 1.5 will raise the bar for the rest of the team, and her beautiful lines on bars will help the Spartans break into the 49s consistently. Smith and Schulte’s excellent beam work, moreover, will stabilize MSU’s very inconsistent lineup and their big tumbling on floor will add some spice to an already solid roster.

Fink is the second 5-star recruit to sign with North Carolina after Lali Dekanoidze last year. It’s an impressive result for the 41st-ranked team in the country and even more so given the multiple coaching staff changes these last couple of seasons. Fink will be expected to contribute in the all around from the very beginning of her freshman season, and she will make a difference especially on vault, bars and beam. On vault, her Yurchenko 1.5, coupled with Dekanoidze’s same vault and fellow freshman Paige Prejean’s stunning Yurchenko full (or even Yurchenko double) will revolutionize the Tar Heels’ lineup. On bars, her solid routine will help Carolina stabilize its shaky lineup, which failed to break into the 49s in 2021. Finally, on beam Fink will add yet another excellent set to those of Dekanoidze and of current beam stars Elizabeth Culton and Hallie Thompson. All in all, Fink could be the missing piece of the puzzle that could propel North Carolina toward unprecedented heights.

The Hungarian elite is a three-time European championship finalist on vault, a 2021 world championship finalist on this same event and the 2018 Youth Olympic silver medalist also on vault. Needless to say, her Yurchenko 1.5, which looked more polished than ever this year, will be a lock in Nebraska’s vault lineup, which has significantly deteriorated over the past couple of years. If the Cornhuskers plan to rebuild their six 10.0 start-value lineup, Bácskay is certainly the gymnast to watch out for. On top of being an excellent vaulter, though, Bácskay also has great lines on the other events. After losing all arounders Addy De Jesus in 2020 and Chloe Lorange in 2021, Nebraska is in need of a strong replacement, and Bácskay could answer the call well.

As you can see, Dildy is the first of three 4-star recruits to have signed with Rutgers last week. What an accomplishment for the 40th-ranked team in the country—the future looks bright! Dildy will be especially impactful to the team on bars, beam and floor. Her bar routine, which won her a career high 9.950 last year, will be of crucial importance to the Scarlet Knights, who failed to break into the 49s at all in 2021. On beam, her stunning lines and rhythm will fit right in on a team that boasted a 9.950 and a 9.900 this past season, as well as several 49-plus team scores. Finally, Dildy’s big full-in on floor will improve the performance value of a lineup that scored over 49 only once last season.

The 2021 level 10 national bronze medalist on vault and bars was a late bloomer but has recently turned into one of the most exciting gymnasts in the class of 2022. Her big Yurchenko 1.5 will add an important 10.0 to a lineup that relied mostly on strong Yurchenko fulls this past season. Her bar routine can score as high as Dildy’s, and her floor routine is equally difficult and impressive, which reflect the game-changing value of this class. Also, Adams’ full-in bar dismount is so high that she can land a double double, too. What more can we add to that?

Riley was the big surprise of the first day of the signing period when she became the third—previously unannounced—4-star recruit to sign with Rutgers. The Canadian elite will be a super exciting addition to the roster. Her lines are stunning on all events, and she will bring yet another Yurchenko 1.5 on vault and full-in on floor to New Brunswick. On bars, she struggled a bit with her elite routine, but her immaculate handstands are made for the NCAA. Plus, we may have mentioned this already, but her style is reminiscent of Kyla Ross’. Who doesn’t like that?

The first 4-star recruit to commit to a Division II school, last year Kraus was one of our Biggest Movers and Improvers in the Class of 2022, thanks to a significant upgrade on vault. At Lindenwood, though, Kraus is expected to be of special help on beam, the apparatus on which Lindenwood lost its shine in 2021 after two impressive years.

Another of our Biggest Movers and Improvers, Wisehart will be a breath of fresh air for a team that seemed to struggle with its lineups all the way through the 2021 season. Especially impressive is her Yurchenko full-on pike, which will be a game changer for the Falcons, which had to rely on multiple Yurchenko layouts this past season. Her beautiful floor work and E opening tumbling pass will also be extremely useful and will help Air Force break into the 49s, a number so close yet so far away in 2021. On bars and beam, Wisehart can be a bit tentative at times, but she will still help stabilize the two lineups.

Similarly to Kraus, level 10 national champion Sheremeta will also be expected to be a game changer on beam for the Colonials, who have been showing glimpses of greatness on this event in the last few years but have not yet managed to break consistently into the 49s since its star senior class graduated. Sheremeta’s gorgeous flexibility and dancing skills on floor will also make her a standout performer in D.C.

Pittsburgh’s bar lineup was extremely inconsistent last season, dropping, for example, from an excellent 48.950 in week three to a 46.925 in week four. Level 10 national champion Pawlak, a former Polish national team member who boasts a career high 9.900 on bars, is expected to bring consistency, poise and elegance to the Panthers’ lineup.

Ball State’s team performances have been a bit erratic in recent years, and Middleton has the potential to stabilize them and post big scores on all events. Her routines are not free from deduction, but her form on beam is very good and will greatly help the Cardinals’ most inconsistent lineup. On floor, by contrast, her big double layout will continue Ball State’s tradition of strong floor workers.

READ THIS NEXT: News, Notes and Surprises From the Start of the Class of 2022 Signing Period