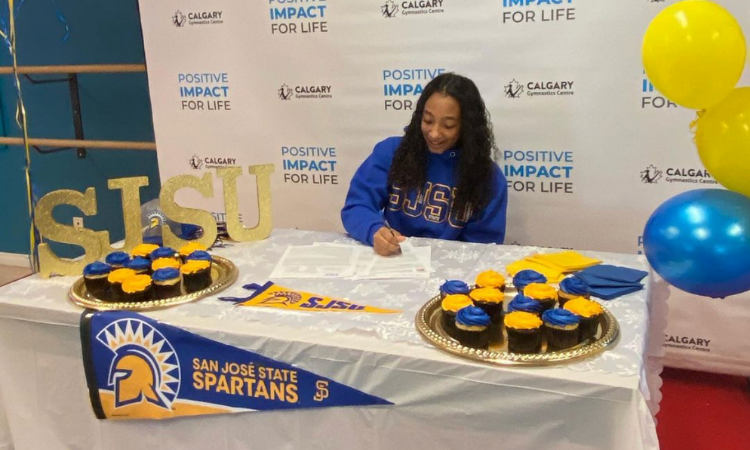 The 2021-22 NLI signing period opened in relatively quiet fashion on Wednesday, with fewer surprises and less drama than we’re accustomed to seeing in the early days. Here’s the biggest news.

Alabama Locks Down No. 1 Signing Class

It was a drama-free signing day for the Crimson Tide, which locked down all six members of its No. 1-ranked recruiting class early on. Alabama’s massive class contains three elite gymnasts and a Nastia Liukin Cup champion.

(If you’re curious about our full signing class rankings, keep an eye out next week!)

New Commits at Every Level

New names who announced their commitments on signing day include:

California wrapped up its signing day without locking down five-star commit Ondine Achampong… but the word “today” in this tweet might turn out to be significant. There’s no need to panic the British elite yet.

UC Davis Commits on the Move?

AnnMarie Gonzalez (three stars) and Samantha Wu (four stars) have both verbally committed to UC Davis in the past, but we’ve suspected for a while that they might be on the move. Their absence from Davis’ signing class adds certainty.

Neither of these teams had a single commit prior to signing day that we knew of, but they added Kyra Cato and Marley Peterson, respectively.

While Illinois and Eastern Michigan each had one verbal commit who hasn’t signed yet, Central Michigan is the last remaining Division I team to be totally without a verbal commit for the college graduating class of 2026.

In last year’s signing day tracker we listed 169 NLI signees; in this year’s version the count is currently at 108 (these numbers are unofficial as schools’ releases aren’t always clear about which signees are on scholarship). It has only been two days, but the difference is still notable. With COVID years counting against scholarship limits starting with the 2023 season, it is likely that coaches are being cautious with scholarship offers until the seniors on their teams make decisions about the extra year. We expect this trend to continue over the next few years until all of the COVID-era gymnasts have graduated.

READ THIS NEXT: Sisters Karley and Kennedi McClain Share Close Bond, Look Forward to Competing Together at Southern Utah in 2023