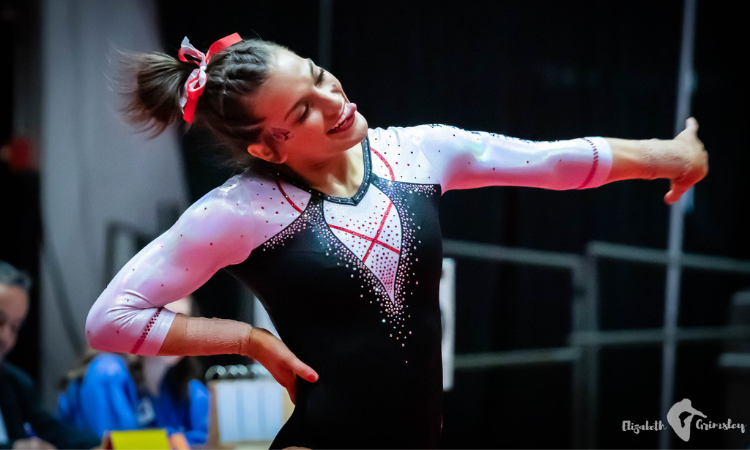 Floor choreography is always a topic of conversation in the gymnastics world, whether we’re in the middle of a season or not. Everyone has their favorites, their preferences and their pet peeves. In this week’s roundtable, we’re taking a look at 2021 routines, from our top sets to underrated faves.

What’s your single favorite floor routine from the 2021 season?

Elizabeth: There so many to choose from, but I think I have to go with Lynnzee Brown. I know this roundtable is about choreography, but Brown’s routine is the perfect combination of superb tumbling, perfect execution, sass and relatable dance moves.

Carolyn: Jaylene Gilstrap. I absolutely love it when a coach/choreographer knows when a gymnast has beautiful lines or can dance elegantly and then uses it to the gymnast’s advantage. She fits that mold.

Talitha: I really liked Natalie Wojcik’s routine. She had such a great combination of beautifully performed tumbling passes, elegant dance and impeccable form. Plus, she had a catchy music choice, which always helps.

Katherine: I have to echo Carolyn: Jaylene Gilstrap’s “violin Despacito” routine was to die for. She is expressive and elegant as can be; plus, you can tell she feels every small nuance in the music and moves accordingly.

Emily M: This is always so hard, but I might have to say Chae Campbell. The choreography is great, and she executes it so well. She has the most precise execution in the NCAA.

Which team do you think had the best overall choreography this year?

Elizabeth: UCLA is the obvious answer, so I’ll pick a runner up: Iowa. The back-to-back duo of Clair Kaji and Lauren Guerin is a stellar way to end a lineup. Plus, the contrast in all the routines is hard to pull off. No two routines are similar, yet all fit the team’s vibe and all are shown off to their fullest potential.

Claire: Georgia or Iowa. Both teams excel at choreographing routines that highlight the gymnast’s strengths and style instead of forcing everyone to fit the choreographer’s style.

Carolyn: For floor music, Utah, but for choreography, Iowa.

Talitha: I really liked California’s floor routines this year, and I was surprised when Liz Crandall-Howell told me that they spent less time than usual on choreography. Kyana George, Milan Clausi and Andi Li did a particularly good job at performing their routines; they were a joy to watch.

Katherine: I agree that Iowa had the most unique and interesting floor choreography this year. Shoutout to Lauren Guerin for adapting and changing her routine halfway through the season, too! (Not that it was needed, but the versatility is impressive).

What team do you think is underrated in terms of choreography?

Elizabeth: Texas Woman’s always has fun routines. I mean, Isabel Goyco literally Rick Rolled the audience with her 2021 choreography and music. It doesn’t get more entertaining than that. But it’s not just Goyco. The whole lineup is fun and always engages the home and away crowd (when there is one).

Carolyn: I would say Arkansas. As cliche as it sounds, I feel like the gymnasts’ personalities really came through in their routines this year. Shoutout to Catelyn Orel for doing such a great job!

Talitha: I will have to say BYU. The Cougars have such expressive and diverse routines, which match every gymnast’s personality very well. This year, it was nice to see that their tradition of creative choreography didn’t end with Shannon Evans’ graduation!

Katherine: I agree with Claire’s take on West Virginia, but I also have to shout out my alma mater and say Temple. They bring it with the choreography and music selection every year; it’s no wonder floor is consistently the best event!

Emily M: Ohio State. Yes, we all know Claire Gagliardi’s routine, but Meredith Paulicivic’s work is great across the board for the Buckeyes.

What about an underrated floor routine?

Elizabeth: I don’t normally turn to Florida when I think of great floor choreography simply because it’s not my style. (Nothing against Jeremy Miranda because I know a lot of people love his work!) However, this year I really appreciated Megan’s Skaggs’ sassy jazz routine. The music was funky, and it matched the way she moves and dances really well. I also loved Emma Andres’ routine. She has a way of moving that’s so slinky, and I really enjoyed this year’s set.

Carolyn: I would say Alex Greenwald. With JerQuavia Henderson, Lauren Guerin, Clair Kaji and freshman phenom Adeline Kenlin all in Iowa’s lineup, I feel like it’s often easy to overlook her solid routines and unique presentation.

Talitha: I will have to say Jessica Castles of Arizona! Her tumbling passes were not exceptional, but her choreography was so beautiful. I loved her classical yet slightly sassy routine to Carmen’s L’amour est un oiseau rebelle; I just adore opera-inspired routines, but they are really difficult to perform well. This was a successful one.

Katherine: Belle Huang’s routine has dazzled the past few years at Rutgers. She’s a performer, and I love the different music she’s used over the years. I also just prefer entirely twisting routines, and her dancing into those passes is lovely. I’m so excited she’s coming back for a fifth year!

Emily M: Definitely Cammie Topp. The wider world got a peek at her floor set at regionals, but we all definitely missed the boat on appreciating her throughout the season.

We did a feature on this a couple weeks ago, but which floor routine do you think should go viral?

Elizabeth: Claire Gagliardi’s PAC-MAN routine needs more attention. I’m sure a place like PopSugar wrote about it, but it writes about plenty of floor routines throughout the year. I wish in general more routines that have clever concepts got more attention. The ones that use popular songs are great, don’t get me wrong, but there’s more out there with viral potential.

Carolyn: Claudia Goyco! She finished this year as one of the top floor performers in the MAC and has fan favorite moments in her routine that the crowd can do with her. I love watching her step up onto the floor and just take control of her performance.

Talitha: It’s funny that of the three UCLA routines that stood out the most this year (Dennis, Frazier and Campbell), my favorite was Chae Campbell’s, yet it was the only one that didn’t go viral. So I’ll go with hers, though I have a feeling that it’s just a matter of time before she will get the Internet’s attention!

Katherine: Definitely Nya Reed’s routine. Pop music routines should instantly get recognition, and I know my jaw dropped when I heard the opening knife sound effect of Megan Thee Stallion’s “Captain Hook” in her music. She’s also a great dancer and big tumbler.

Emily M: I helped write that feature! We didn’t include Campbell or Mya Hooten and definitely could have.

In general, what elements make an enjoyable floor routine for you?

Elizabeth: I like routines with catchy music, unique choreography and expression. You can perform the best choreography in the world but if you do it with a blank face, it’s going to be boring. You can easily see a difference in gymnasts on UCLA who perform the hell out of their routines compared to those gymnasts that simply go through the movements.

Carolyn: For me, it is mostly the music. It can’t be too techno-y or have too many songs piled into one. The choreography also has to match the music whether this is a move right on the beat or the general feel of the routine. Plus, it is always fun to watch the gymnast get into the routine and go all out with it.

Talitha: As Elizabeth said, it’s fundamental that the gymnast performs the routine. If a piece of choreography is beautiful, but it doesn’t match the athlete’s personality and/or she simply doesn’t feel it, it loses its appeal. More generally, I love good posture, straight legs and pointed toes, so form is very important for me. The best floor routine for me is one with a contemporary style, a classical echo, a catchy music with a good rhythm and a touch of something extra.

Katherine: You can probably sense this from my previous responses, but it’s all about the music for me. What better way to get a crowd (when a crowd is allowed) hyped up than using music they know? I’m not saying that every routine has to have recognizable music in it, but I think coaches should look more at their athletes’ Spotify playlists (or maybe mine, shameless plug) for inspiration rather than pulling from the same public domain dubstep tracks they seem to rely on now.

Emily M: Joy. That might sound silly, and I don’t mean it in a she-should-smile-more way. I’m talking about the gymnast becoming a performer and living her routine and having fun (or at least looking like she’s having fun!). It could be Gagliardi’s running around the floor, Kaji’s great balletic presence or someone like Dennis’ set with a message.

Which gymnast or team are you looking forward to most in terms of 2022 choreography? This could be an incoming freshman, a current NCAA gymnast or a whole team you enjoy.

Elizabeth: I’m always interested in seeing what Oklahoma comes up with next. I know it’s often too weird for most gym fans, but I cling on to the odd, quirky moves KJ introduces to routines. You can never call her choreography boring, and that’s what I love about it.

Carolyn: Without a doubt I am looking forward to all the new high-profile commits beginning the new journey of college floor, but for specific gymnasts, I am excited to see what Alyssa Vulaj will give to us. You might remember her JO routine from a couple years ago when the whip and nae-nae was all the craze and she  incorporated it into her routine, but now she’ll be an incoming freshman to Boise State, and I can’t wait to see what she will do!

Talitha: Probably Florida. The incoming freshmen have such a variety of different styles that I’m excited to see what Jeremy Miranda will come up with for each of them. Plus, I still hope that Morgan Hurd will one day perform a Harry Potter-inspired routine, so why not next year?!

Katherine: UCLA’s freshman class brings some amazing floor performers, and I can’t wait to see the choreography they get. I imagine Emma Malabuyo and Brooklyn Moors will bring the house down in Pauley.

Emily M: I’m really excited to see what Arizona will do with Alysen Fears. She’s really stunning on floor and could be a breakout star in the Pac-12. Friendly reminder that Gabrielle Clark (of Biles fame) joins Utah State this fall. With the right choreography she has the potential for perfection.