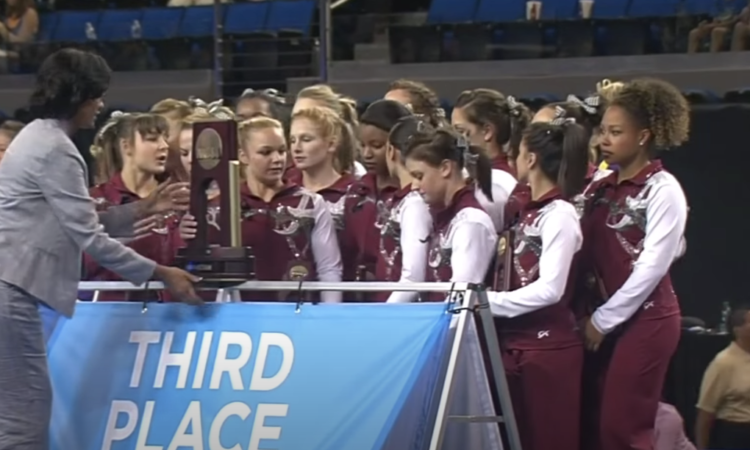 It was the final rotation of the 2013 Super Six. Alabama was in first by 0.025. Had that lead held, the Crimson Tide would have won its third straight national title. Instead of capitalizing on the moment, Alabama junior Sarah DeMeo fell in the anchor position, and the Crimson Tide had to count a 9.625. That was enough for Florida to squeak ahead and top Alabama, who fell to third behind  the Gators and Oklahoma.

We often remember the stretch between 2013 and 2015 as a back-and-forth battle for supremacy between Florida and Oklahoma. Florida won all three years, and Oklahoma tied for the title in 2014. But during those years, Alabama nipped at both teams’ heels and came painfully close in two of them to winning. Let’s imagine what might have happened if Sarah DeMeo stayed on the beam in that final rotation in 2013. Assuming that happened, here are all the ways the ensuing 2013 Alabama championship could have changed NCAA gymnastics history.

No longer haunted by 2013’s misfortune, Alabama could have won again in 2014

In reality, Alabama had a chance to win this meet too and was in it almost the entire time. The championship was held in Birmingham, so the Crimson Tide had a home crowd advantage that boosted its performance until its final rotation: beam, for the second year in a row. But seniors Deandra Milliner and Kim Jacob both fell. Beam is a touchy event no matter the circumstances, but one can imagine Milliner and Jacob would have had a slightly better time in their collegiate routines if they weren’t haunted by the disastrous rotation a year ago.

Let’s think not. Imagine Alabama escapes that final beam rotation with no counting falls. With no other changes, their total would top both Oklahoma and Florida’s tied scores for a fourth straight national title.

Consider the recruiting repercussions of this. With four straight years of national titles under her belt, new head coach Dana Duckworth might have had more success at getting some of the best gymnasts who went onto different SEC schools or other title contenders like Oklahoma. It’s hard to speculate on specific gymnasts since we don’t know who considered which school, but for what it’s worth, Tide gymnast Kaitlyn Clark trained at the same club as Kennedi Edney. Ashley Priess and Amanda Jetter trained at Cincinnati Gymnastics alongside Amelia Hundley, Lexie Priessman and more. One can imagine Duckworth (and Patterson, depending on the timeline) could have lured at least some of these gymnasts to Tuscaloosa if they were pitching Alabama as the four-peat national champion.

All that, though, hinges on Alabama winning in 2014. Maybe Alabama would have still melted down on the beam and given up the championship in 2014, too. In that case, let’s think of some alternatives.

Florida could have won outright in 2014

If the Gators had lost out on the title in 2013, pressure would have continued mounting on Rhonda Faehn to win a national title, as it had been for years. That pressure might have resulted in the show of a lifetime in the 2014 Super Six; a show that might just have been enough to edge Florida past Oklahoma instead of tying them both for the title, all other scores remaining the same.

How might that have impacted the ensuing 2015 season? Looking at results, it’s unclear how much Alabama winning in 2013 would have impacted them here. The Crimson Tide would have gone into 2015 minus the key senior trio of DeMeo, Jacob and Milliner. You also have to imagine Sarah Patterson would have still stepped down given the medical issues that caused her to do so in real life. Given that, Florida would probably have been the heavy favorite to win in 2015. Let’s imagine that it did once again. In that case, the Gators would be in search of a three-peat going into the 2016 season. If Faehn was hungry enough to achieve this, she might not have been persuaded to leave Gainesville for USA Gymnastics. While the repercussions of this decision would be huge for gymnastics as a whole (mainly for Faehn’s overall well-being), the collegiate gymnastics implications alone would be interesting.

Oklahoma would have had even more bulletin board material

Whether Alabama won in 2014 or Florida won outright in 2014 and again in 2015, Oklahoma would still have been titleless at the dawn of the 2016 season. Given what we’ve seen from KJ Kindler in terms of her and the team’s reactions to losing, the Sooners wouldn’t have liked this one bit. Perhaps the ensuing 2016 season would have been a precursor to #PZSTF, and the Sooners would have won that first 2016 title in even more of a vengeful fashion. This would have shaped the identity of this team for years to come; imagine an even more competitive and intense squad than the Oklahoma we know now. It would have happened.

Regardless, Rhonda Faehn probably wouldn’t have left Florida in 2015**

Results-wise, if Faehnn had stayed at Florida, she would likely have seen similar results as Jenny Rowland did in real life, but perhaps with a bit more postseason success. If Faehn was seeking that third championship in a row, she might have achieved it in 2016, Bridget Sloan’s final year. Alicia Boren was a handy replacement for Kytra Hunter’s four 9.9-plus scores throughout that season, and Florida was right up there until the Super Six. It’s unclear how much Jenny Rowland’s coaching has played into Florida’s comparative lack of postseason success, but one can imagine Rhonda remaining there would have at least kept the Gators at the same competitive level to stay in the meet when it counted.

Provided she racked up a few more titles at Florida, Faehn might have considered her work done in Gainesville and sought out other opportunities. Sure, she seemed happy at Florida in real life, and USA Gymnastics seemed like an opportunity she couldn’t pass up. But there were plenty of other intriguing options that came open around this time frame, and if Faehn never went to USA Gymnastics and ruined her reputation, she’d have been a key candidate for any of them. Let’s discuss some options.

This would have been a bombshell. What if Courtney Kupets Carter wasn’t interested in coaching when Danna Durante was fired in 2017? Georgia would have still been looking for a blockbuster hire to rejuvenate the program, and Faehn would have definitely been that. Maybe I’m experiencing recency bias with Kim Mulkey jumping ship from Baylor to LSU over in the basketball world, but there is some precedent of it in gymnastics too (Georgia’s own Jay Clark went to LSU after his own disastrous tenure with the Gymdogs).

It sort of happened already, but it’d likely last a bit longer here. Faehn might have taken over for the disgraced Scott Vetere and could have easily worked her way up. Granted, going from head coach to assistant was a little more plausible in the real life timeline, when Faehn was desperate for anything she could get. But what if Michigan promised Faehn she’d be the heir apparent to Bev Plocki, and soon? That might have led to some interesting results, including Plocki retiring prior to 2021, the results of which would warrant an entirely different What If… piece.

Faehn was an alum and would surely have been intrigued at the chance to return after a successful career there. This would also have meant that she remained at Florida until 2019, the results of which would ALSO warrant an entirely different What If… piece.

A little bit more of a stretch, but Faehn had B1G experience at Maryland, and in this timeline, Faehn would look like a squeaky-clean hire in the aftermath of the mess left by the Thompsons.

See above. The same applies here.

Let’s go back to Jenny Rowland. The former Auburn assistant took the reins in Gainesville shortly after the 2015 season concluded. But even if the Florida job wasn’t available, Roland was still an attractive coaching candidate after a 2015 nationals in which Auburn made the Super Six for the first time in 22 years. Let’s imagine Rowland stays at Auburn for the 2016 season. It’s around this time that Rowland’s alma mater, Arizona State, was on a steep downward trajectory. Rene Lyst was in her second season there, and the Sun Devils had quickly established themselves as Pac-12 basement dwellers. Lyst was placed on administrative leave in March of 2016 and fired two months later. If Rowland was available, perhaps Arizona State would have considered her rather than bringing in the Santoses from Eastern Michigan. Rowland could have been a good fit for Arizona State, and she might have been able to bring in talent she’d recruited to come to Tempe instead (she likely persuaded Savannah Schoenherr to switch her commitment to Florida, after all).

Of course, depending on when Faehn actually departed in this alternate timeline. Rowland might have still ended up at Florida. But that’s too boring for the purposes of this exercise.