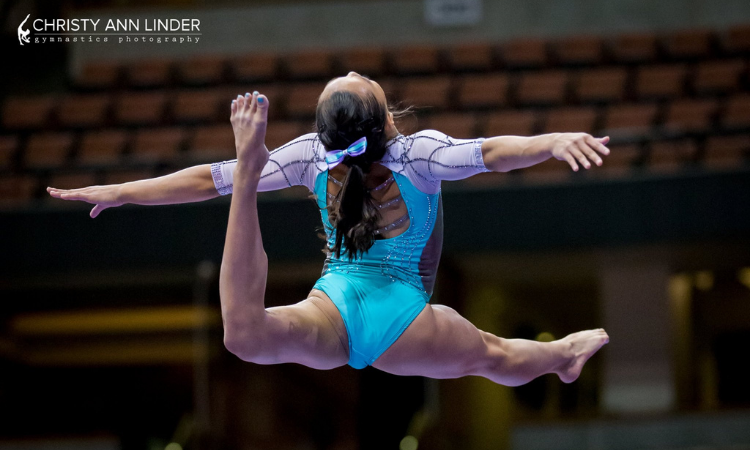 UCLA signee Jordan Chiles won the Winter Cup senior all around title with a nearly two-point margin (57.050). The future Bruin impressed on all four apparatuses, where she showed off both a high level of difficulty and very good execution. Some difficult skills, such as her double layout on floor and her Yurchenko double on vault, are so solid that she is likely to compete them next year at UCLA, too. She is going to become an NCAA star.

The other future Bruins competing at the Cup also did well. Signee Emily Lee was third in the all around with quite a solid performance (53.400). Lee’s execution suffers from an excess of difficulty, but her basics are excellent; she is expected to be a strong contributor for UCLA next year, especially on beam and floor. Another signee, Emma Malabuyo, was back after three years out of competition floor due to injury. She competed on vault, beam and floor. Her difficulty is largely back, but she had a few short landings on floor. She has the potential to have an incredible career at UCLA if she can stay healthy. Sydney Barros, in the class of 2023, competed in the same three events as Malabuyo. She also struggled a bit with execution, though it was nice to see her compete a big piked double Arabian on floor.

Florida commit Shilese Jones was second in the all around (55.100). She showed off difficult gymnastics and good execution, and particularly impressed on floor, where she debuted her unique double back with 1.5 twists. As the only 2021 Gator commit not to have signed her letter of intent, it is unclear what is going on between Jones and Florida. However, her gymnastics was born for the NCAA, so hopefully she will get the chance to compete in college.

LSU commit Lilly Lippeatt, in the class of 2023, finished just outside the medals with a solid performance on all four events (53.250), which included her signature back full twist to double tuck on floor. It will become an immediate fan favorite in Baton Rouge if she gets to compete it.

Auburn signee Sunisa Lee won bars with an incredible routine that isn’t even the hardest one she is training. She was also third on beam for a more confident routine than the ones she performed in 2019. The other Auburn commit, Lyden Saltness, in the class of 2023, had a solid meet too and showed off some very pretty wolf turns on both beam and floor.

Oregon State signee Jade Carey competed three solid routines on vault, bars and beam. Her elite scores are not the highest on bars and beam, but her lines are very good and she will make a big difference in college. Clubmate Riley McCusker, a Florida signee, had her competitive debut since leaving MG Elite and competed in the same events as Carey. She struggled a bit on beam, but her lines were beautiful both there and on bars. She could anchor Florida’s bar lineup from day one.

Konnor McClain and Skye Blakely, both in the class of 2023, impressed on beam, manifesting that they, too, are in contention for an Olympic spot.