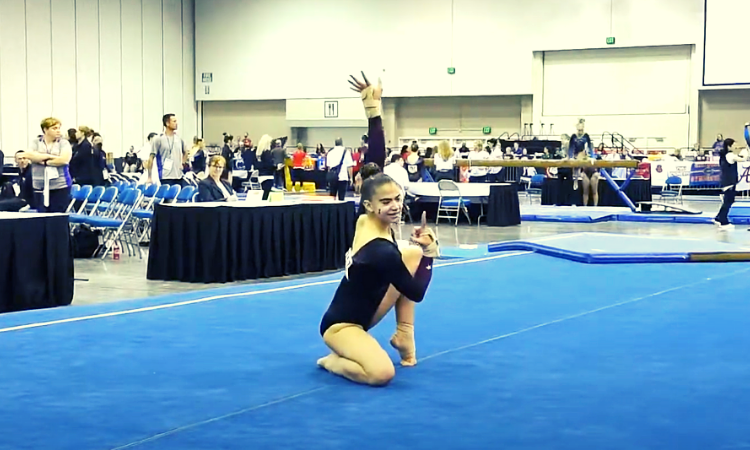 This year’s Nastia Liukin Cup is going to be an exquisitely high-caliber competition. Seven seniors boast career highs over 39 points, of which five were achieved at their respective NLC qualifiers. Additionally, six gymnasts, five seniors and one junior, sport perfect 10.0 career highs, which is an outstanding achievement in club gymnastics.

Celestine, Linker and Theodorou boast career-high perfect 10.0s on vault. Celestine and Linker perform Yurchenko 1.5 vaults, while Theodorou a rare Yurchenko half-on tucked full twist off. Senior Chloe LaCoursiere, in the class of 2023, and junior Bailey Stroud, in the class of 2025, sport perfect 10.0s on bars, which they scored at their respective NLC qualifiers this year. Finally, Smith scored a perfect 10.0 on floor earlier this year with a huge routine that includes a full-twisting double pike mount.

Previously at the Cup

Compared to previous editions, when numerous qualifiers had competed at the Cup before, this year only six gymnasts have experience at the meet—Celestine and Ohio State signee Tory Vetter in 2018, 2023 graduate Amber Lowe in 2019, juniors Mackenzie Estep and CJ Keuneke in 2019 and Michigan State commit Nikki Smith in 2020. Of the six, Vetter is a previous winner, as she won the junior title in 2018.

Alabama commit Gabby Gladieux, who competed at the Cup twice in 2018 and 2019 and won the junior title the second time, was also an NLC qualifier. Unfortunately, she had to withdraw from the competition and was replaced by Lowe.

All seniors in the classes of 2021 and 2022 are college commits. Unlike previous years, though, no NCAA team stands out for the number of qualifiers. Missouri is the only team to boast two qualifiers—Celestine and Jocelyn Moore—while all other represented teams have one qualifier. Florida will be represented by Blakely, Alabama by Hudson, Oklahoma by Linker, Arizona State by Theodorou, Washington by Leah Smith, LSU by Wilson, Ohio State by Vetter and Michigan State by Nikki Smith. Additionally, California will feature signee Madelyn Williams, West Virginia will be represented by commit Miranda Smith in the class of 2022, and Iowa State will have signee Hannah Loyim.

Celestine is the sole 5-star recruit to have qualified to the Cup. This is an unsurprising statistics, given that most 5-star recruits are current elites, while Michigan signee Jacey Vore is out after an Achilles tear and Selena Harris, in the class of 2022, did not attempt to qualify. North Carolina signee Lali Dekanoidze, on her part, narrowly missed out on qualification.

Blakely, Leah Smith and Williams are 4-star recruits in the class of 2021, while Linker, Loyim, Moore, Theodorou, Nikki Smith and Vetter are 3-star recruits.

Fourteen of the 18 junior qualifiers boast all around career highs over 38 points, with Nina Ballou and Alicia Zhou, both in the class of 2025, posting the highest qualifying scores, a 38.800 and a 38.600 respectively. In between them, Kamila Pawlak recently posted a 38.700, outscoring her NLC qualifying score by almost one point.

Across States and Clubs

Similarly to the represented NCAA teams, no club especially stands out this year. Jaycie Phelps, Metroplex and Florida Elite qualified two gymnasts each, while all other clubs have one representative. Unsurprisingly, Texas dominated the state race with eight different clubs, while Florida beat California four clubs to three. The New York area also did well, with clubs from New York state, New Jersey and Connecticut.

Five clubs (Everest, Universal, North Stars, Twin City Twisters and Texas Dreams) had gymnasts winning the Cup in the past. Of them, Universal is sending a previous NLC champion in Vetter, while Everest, which is sending Lowe, won the senior titles in 2018 and 2020 with Haleigh Bryant.

It will be a close meet that will come down to who will have the best performance on the day.

In the senior field, Blakely, Celestine, Hudson, Linker, Leah Smith, Theodorou and Wilson will likely have an edge. Blakely and Hudson can rely on their elite experience competing on podium and surrounded by a television crew, though the last time that Hudson competed elite was five years ago. Blakely will capitalize on her big Yurchenko 1.5, which hasn’t scored below 9.9 all season, and so will Celestine, whose Yurchenko 1.5 is the best in the field. Linker will rely on her difficult gymnastics, though execution issues may jeopardize her chances of victory, while Leah Smith will need to keep her nerves at bay on beam to keep up with the others.

Theodorou enters the competition as the favorite after posting the highest qualifying score, as well as two scores over 39 points in 2021 and three scores of 9.800 in a row on floor. Wilson will be the dark horse. After a difficult 2020 season, she came back impressively strong this year, outscoring her previous all around totals by over one point and showing off incredible execution and amplitude on all four events. Plus, she has history on her side—six winners in the 11 years of the Cup were LSU commits.

The junior competition is very open. Ballou enters the meet as the highest qualifier and the favorite, though she needs to capitalize on her big Yurchenko 1.5 to have a significant edge. Zhou, the second highest qualifier, also has a chance, though she does not have many level 10 meets under her belt and scored over 38 points only once. Harkins, Estep, Van Frayen, Pawlak, Piper Slocum, CJ Keuneke and Lillian Jennejohn all have a shot at the title but, like Zhou, they struggle with consistency, so a lot will depend on their performance on the day. Belman, Stroud and Azaraya Ra-Akbar have one pet event, but will need to have exceptional performances on the other three apparatuses to have a chance of beating more balanced all arounders.