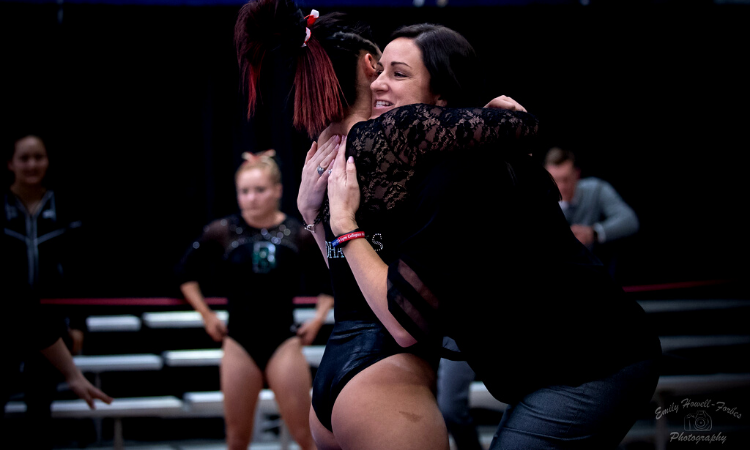 An exceptional double-meet weekend at home led SEMO to the top of the USAG standings, joining Lindenwood and Texas Woman’s in the 195-plus club. Things are very close between these three in the NQS rankings, especially because Lindenwood has the lowest fourth score of the three teams and thus can gain the most with a good week next week. Air Force also got a season high, Lindenwood and Texas Woman’s both had a meet to forget and Centenary returned to form on Sunday after challenges on Friday.

Junior Kaziska hit her stride this weekend, contributing meet-winning 9.875s on both beam and floor to SEMO’s season high on Friday before setting a career high on floor on Sunday. Her 9.925 is seventh in program history on this event. Unfortunately, I haven’t been able to find video.

(You can trust me that this was a true, emphatic stick even though Cody Llewellyn’s head is obscuring her feet in the video!)

Vault has been a strength for Lindenwood this year, and senior Leman was able to take advantage of the big stage at Oklahoma to stick her Yurchenko full and produce a career high 9.925.

Centenary and Illinois State at SEMO

The Big Storyline: SEMO broke through as a major national championship contender at this meet, joining Lindenwood and Texas Woman’s in the exclusive 195 club with rotation scores above 49.000 on both beam and floor. Junior Anna Kaziska led both of those lineups, while Alana Fischer and Dahlia Solorzano-Caruso also turned in top scores. Meanwhile, Centenary struggled on bars, producing just a 43.050 that limited the team total despite strong rotations on the other three events.

The Big Storyline: Oklahoma had a good-not-great meet. Ragan Smith returned on bars, but the Sooners weren’t without their struggles. Beam was particularly shaky, and many landings overall weren’t up to par with what we’re used to from the Sooners. Denver put up one of its better performances of late and notched its second-highest total score of the season. Floor was a weaker event, but Lynnzee Brown’s 9.975 propelled the team total. It was probably Denver’s best vault rotation of the year, though the Pioneers left tenths on the table elsewhere.

Implications: Conference rankings remain unchanged. With NQS starting, Oklahoma will move up from No. 3 to No. 2, while Denver falls down to No. 13 with other teams being able to drop low scores. Denver will want to replicate or better this score moving forward if it wants to move back up into the top 10.

Why You Should Clear Space on Your DVR: Oklahoma has rebounded from its early-season slump in a big way, averaging a 197.333 in its past three meets. Texas Woman’s set five new career highs en route to a second place finish at Metroplex; this is a team to watch! Lindenwood’s vault lineup is currently ranked 20th—two spots higher than Denver for those keeping track—and absolutely worth watching. Speaking of Denver, the Pioneers are one of the best bars and beam teams in the country, and are capable of going 197-plus on a good day.

You Can Fast Forward, but not Through This: When the Sooners hit beam, they hit beam: They’ve posted some of the highest beam scores this season. Also keep an eye out for Texas Woman’s floor rotation; Isabel Goyco’s Rickrolling routine is a whole lotta fun.

The Big Storyline: Centenary bounced back from a tough meet on Friday, gaining two and a half points on bars and two on beam to return comfortably to the high 180s. This is a team that definitely can crack 190 in the coming weeks, but with a very late start, consistency is still coming together. SEMO fell ever so slightly back to earth after its exceptional Friday meet, but still produced its third-best score of the year.

Implications: Sunday was key for SEMO’s ranking: The Redhawks had one much lower score in their provisional NQS and were able to beat it by two points. This meet is when they became No. 1 in USAG rankings, practically speaking. In individual rankings, SEMO is also looking good: Dahlia Solorzano-Caruso ranks No. 1 in the all around, Anna Kaziska tops the standings on beam and floor and Jolie Miller is the best in USAG on bars.

Records: Anna Kaziska’s 9.925 on floor is her career high as well as No. 7 in program history on that event.

The Big Storyline: This was a meet Texas Woman’s will be happy to forget about. With three misses on bars and only two floor scores above 9.500, it was a frustrating season low after a solid meet two days before at Oklahoma. Air Force, on the other hand, set a season high in its home opener, improving on three events from last week.

Implications: Texas Woman’s jumped over Lindenwood in the inaugural rankings, though SEMO overtook both. All four of TWU’s current NQS scores were on the road, so there’s no reason to worry about the logistics of replacing anything.

READ THIS NEXT: The USAG Dismount: Week 7