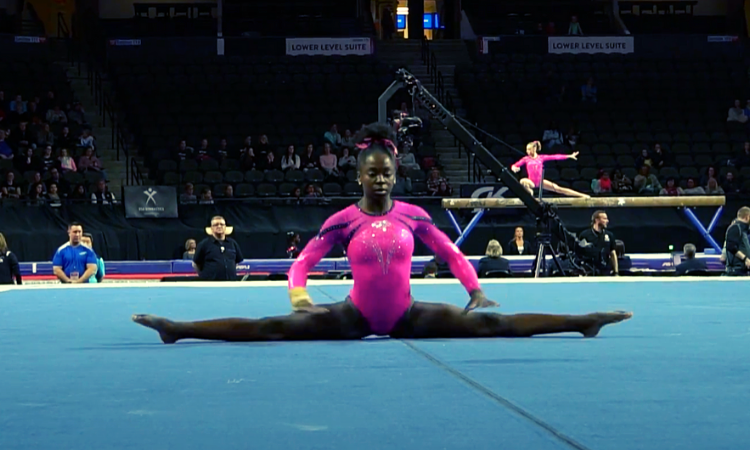 With seven gymnasts boasting all around career highs over 39 points and seven athletes sporting perfect 10.0s, the 2021 Nastia Liukin Cup will be an extremely high-caliber competition.

Together, they represent some of the best level 10 gymnasts in the country and the future of NCAA gymnastics.

The qualifiers are aware of the depth of the field and are excited about it. “It is very humbling and such an honor to be able to compete with so many talented gymnasts,” Washington signee Leah Smith said. Loyim, an Iowa State signee, added, “It is going to be a meet filled with high-level routines, and I can’t wait to be a part of it.”

The disrupted past year and the struggles that gymnasts still experience training under COVID-19 restrictions render this year’s Cup even more special than normal. “I am so happy that I was able to accomplish this goal during my final year of J.O. gymnastics, especially with everything going on this competition season due to COVID,” Loyim said, while Leah Smith added, “I am very grateful that I have been able to train with my coaches and my teammates during this pandemic, so being able to compete at the NLC is truly a blessing to me.”

Competing at the NLC is especially meaningful to the numerous high school seniors, for whom this year was the last chance to qualify before heading to college in the fall. Blakely (Florida), Celestine and Moore (Missouri), Hudson (Alabama), Linker (Oklahoma), Loyim (Iowa State), Leah Smith (Washington), Theodorou (Arizona State), Vetter (Ohio State) and Williams (California) were almost unanimous in expressing their delight in ticking the NLC off their club gymnastics bucket list.

“It’s icing on the cake to my senior year,” Hudson said. “I couldn’t be more grateful to my coaches, family and teammates for helping me get here.” Loyim added, “I can finally cross it off of my senior bucket list, and it is an amazing way to end my JO career.”

Given the complexities of the NLC qualification process, making it to the Cup feels like the coronation of years of hard work in the gym. “It feels amazing that all my hard work has played off, allowing me to experience something like this,” Moore said.

For a lot of the qualifiers the Cup represented a long-term goal, which adds to the importance of the event. For Loyim, qualifying to the NLC has been a goal since she became a L10 in 2018, while both Leah Smith and Theodorou have worked toward qualifying for at least two years. For 2023 graduate Price, qualifying to the NLC was her No. 1 goal in 2021.

The glamorous side of the Cup, as well as its broadcast on national television, equally contribute to the athletes’ excitement and the uniqueness of the event. Most gymnasts are happy to compete on podium and in a big arena, while others, like LSU commit Wilson, say that they look forward to competing on TV for the first time.

For West Virginia commit Miranda Smith and 2024 graduate Zeiss, the sparkling pink leotards that all qualifiers receive for free are an additional reason to look forward to the event. Plus, meeting Nastia Liukin herself is an obvious perk. “I am just so grateful for the opportunity and the chance to meet Nastia Liukin because she inspired me so much when I was younger,” LaCoursiere, who is in the class of 2023, said.

“She came to our gym when I was little,” Zeiss added. “She signed autographs for us and was an amazing person. I watched her videos all the time growing up, so to compete in her meet is such an honor.”

Lastly, a few gymnasts have personal reasons that make the NLC special. Price’s sister Frankie, an Arkansas signee, was a 2019 NLC qualifier, and Morgan is delighted to follow in her footsteps. “It was super fun to watch her then,” she said. “I have always watched this meet, so me finally being able to be in it amazes me.”

Zeiss, who qualified elite as a junior in 2020 and as a senior in 2021, is looking forward to experiencing the NLC before pursuing her elite goals. “It is incredibly special to me this year because after the NLC is over I will begin my elite career,” she said. “So this really was my only chance to do it. I am honored to be there.” Zeiss will compete in her first elite meet Saturday, the day after the NLC, at the Winter Cup.

Celestine had her new floor routine choreographed by her brother and is excited to show it off on the big stage. Additionally, she hopes that her qualification will serve as an example to the younger gymnasts. “I am most excited [to show] my teammates at home—especially the younger ones I coach—that even though we had one tough year, that still didn’t stop me from my end goal,” she said.

Celestine, like Vetter, Lowe and Nikki Smith, as well as juniors Estep and Keuneke, already competed at the Cup as a junior in 2018, the year Vetter won. She finished ninth and struggled a bit, yet she said, “My previous experience at the NLC was by far one of my best experiences in my 15 years of gymnastics. I didn’t do as well as I may have wanted to, but I had such an amazing time with the new friends I met, and getting a chance to compete on podium meant so much to me that it didn’t matter to me how I did—all that mattered was that I had a great time.”

Nikki Smith, who competed at the Cup as a senior last year also remembers it as “a wonderful experience.” “The best part was having all my teammates cheering me on in the audience,” she said. “They all traveled from Michigan to Wisconsin. I felt their love.”

Celestine performs the best Yurchenko 1.5 in the field and will want to capitalize on it to have a chance of winning the title. The competition is deep, though. Indeed, Celestine is not the only qualifier to have scored a perfect 10.0 on vault—Linker and Theodorou did it too with a Yurchenko 1.5 and a Yurchenko half-on tucked full twist off, respectively.

Theodorou is the highest qualifier to the Cup with a huge 39.300 and is the only gymnast to have scored over 39 twice this season. Given her recent achievements, she is the favorite to clinch the victory. The Arizona State signee, however, remains modest. “I was really proud [of qualifying] because I felt like my hard work has really paid off,” she said.

She will have to be near perfect to win the title, though, as six other gymnasts have all around career highs of over 39—Celestine, Blakely, Hudson, Linker, Wilson and Leah Smith. The latter boasts a perfect 10.0 on floor for a routine that includes a beautiful full-twisting double pike. Wilson competes it equally well, setting the stage for an outstanding floor rotation at the meet.

Bars is LaCoursiere’s specialty, as she scored a perfect 10.0 at her NLC qualifier earlier this month. “After I got my 10.0 on bars I didn’t think the day could get any better,” LaCoursiere said. “So qualifying was just the cherry on top. It also made me realize I am a pretty good gymnast.”

The junior field also counts a perfect 10.0 on bars belonging to Stroud, who scored it at her NLC qualifier as well, the same weekend that she equally managed to qualify elite and was invited to her first developmental camp. Stroud is training some impressive and difficult skills on her pet event: an Ezhova to Maloney to Pak salto, as well as a Maloney to Bhardwaj.

The highest junior qualifier is Nina Ballou, whose 38.800 all around qualifying score was higher than more than half of the seniors’. The difficulty of her skills and the maturity with which she performs them reveal a readiness beyond her 14 years of age. If she can repeat her NLC qualifying performance at the Cup, including a stuck Yurchenko 1.5, she could clinch the victory. “[I’m] incredibly proud to be competing with the best of the best,” Ballou wrote on Instagram.

While this list of skills and accomplishments is impressive, for the qualifiers the NLC means more than showing off their gymnastics prowess. Celestine in particular hopes that her performance there will turn her into a role model for younger gymnasts, who she wishes to help grow in the gym and beyond. “I grew up in the gym where I had so many amazing role models to look up to,” she said. “I’ve always wanted to be the person that gymnasts after me can look up to and feel like they could talk to me and ask me questions about my experiences.”

The NLC is a bonding experience for athletes coming from all over the United States. Leah Smith and Price hope to meet new gymnasts and make new friends at the Cup, while Theodorou looks forward to seeing some of her friends from other parts of the country.

Ultimately, they all have great respect for each other. “I am wishing every gymnast good luck,” Nikki Smith said. “Gymnastics is an extraordinary sport, and I am happy to be a part of this experience.”