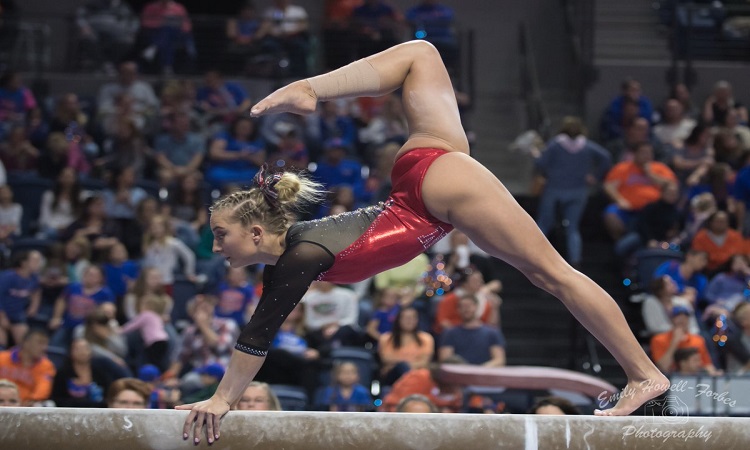 It is Big Five weekend in the Big Ten! The top three teams from this meet will land in the night session of Big Ten Championships next weekend. The other three seeds for the championship will be the top three finishers from the other Big Five meet at Rutgers later today. The remaining four teams will compete in the afternoon session next weekend.

This is going to be an exciting one; Nebraska and Ohio State are likely to easily place in the top three, and Michigan State is likely out and will be in the afternoon session next weekend. Maryland and Illinois should battle for the final night session spot. Both teams have similar high and low scores this year. Maryland tends to hit big scores at home and struggle away while many of Illinois’ best scores have come on the road. Illinois has a slightly higher season high than Maryland (196.700 to 196.575), so it has a slight edge. Seeding for next weekend only depends on what happens here today, though, so anything can happen. That is especially true because of the draw for this meet: Illinois will end on a bye while Maryland vaults in the final rotation!

Some exciting routines to keep an eye on:

A note about BTN: It is very unlikely we’ll get to see every (or even most) routines. Expect a lot of Nebraska and highlighted routines thrown in. I’ll blog everything I see, but unfortunately there won’t be four event streams, so we will certainly miss some of the action.

If you’re around early, turn on BTN to see the end of the OU men taking on Illinois! OU is dominant for the men, and Illinois is on its best event, high bar.

March In has started here in East Lansing! #B1G5 #GoGreen

Looks like we’re may miss some routines while this men’s meet finishes up on BTN. Yul Moldauer just killed his PBar set for the OU men.

Live scores not working at all. We’ll see how that goes. EYEROLL.

Jamie Stone (tOUS): Jumping into the middle. Pretty switch side. RO 2.5 just a step to the side. That’s a huge dismount! Love it.

Based on scores I caught that were flashed and those that were entioned in the commentary, it sounds like Illinois had a very solid floor rotation, and what we saw backs that up. Ohio State really struggled on beam. Two falls, Mattern’s wobbly set, and Huang must have missed a connection somewhere because I saw a 9.55 go up for her. tOSU could open up the chance for both Maryland and Illinois to qualify with Nebraska for the night session. Nebraska looked decent but not postseason ready on vault. Landings!

Who guessed Illinois would lead after one, followed by Maryland? NOT ME! This is going to be a RIDE friends. Hang on.

Peterman (MD): Wolf turn 1.5, some bent knee in the extended leg. Side aerial, lands sideways and drops chest, tries to cover and make look like a side somi. Maybe it was? Bhs loso, solid. Cat + switch half, shy of 180. RO 1.5 big hop forward. Definitely not her cleanest work.

Jordyn Givens (Ill.): FTY head out and big hop to the side.

We’re getting a crowd shot instead of MSU floor whyy.

Houchin (Neb.): Giant full + Tkatchev, big. Bail hand lovely. Great handstands. Giant full TINY leg sep, gets stuck and comes off. Her first fall this year I believe. Will have to repeat the full because she does a double tuck. Hits this time Double tuck tiny hop forward.

Balthazor (Ill.): FTY flaired, just a hop back. Way too much power.

Agaran (MD): Jumping in the middle. Bhs loso, wobble chest down and foot up. Big error. Side somi, nice. Cat + switch side, chest down. Gainer full off the side, small hop. Not excellent.

We’ll wait for the broadcast scores to come in, but based on what we saw/heard, Illinois is ROLLING. Every other team is counting falls or major errors. If things continue this way, tOSU, Nebraska and Maryland will be battling for those last two spots behind Illinois. The Illini can be excellent on bars and beam, but they can also fall apart. Really anything can happen here. EXCITING.

Anna Gamelo (MSU): FTY, some pike and a step. Not huge either.

Stone (tOSU): 2.5 punch front, nice. We jumped in in the middle of her set. Switch side + popa great splits. Fun choreo she performs well. 2.5 twist, steps to the side. They’ll take a tenth or so. Nice routine!

Wow. Bit more than halfway through, and Nebraska is really struggling. The Huskers are heading to bye, so will have a chance to regroup. Illinois is moving to its oft-best event in beam, but the Illini can also melt down there. If they hit, they will be in nice position for a new season high and spot in the Big Ten night session. Maryland is having a good but not great meet, and will want to hit big on floor and vault. Ohio State staged a big comeback on floor, and will hope for mistakes from Illinois. MSU is hanging in, and had a solid vault rotation.

Noonan (Ill.): Bhs loso, pretty extension. Moving with confidence. Sissone + loso, pretty just some toes on the loso. Switch + split half, leg up. Cartwheel + gainer full off the side stuck. Just that leg up.

Balthazor (Ill.): Switch side. Bhs loso medium check some knees on the bhs. She looks a bit tight but working through. Front toss solid, better. Beat + straddle 3/4 no problems. Gainer pike off the end stuck. Great recovery from the wobble.

Hodan (Ill.): Side aerial bhs and she falls. Not been super consistent this year. Switch + sissone little wobble. Cat + Illusion love that, solid. Cartwheel stuck gainer full off the side. Disappointing for her.

Illinois’ night is done! This is a huge score for the Illini. They’ll now sit and wait to see if Maryland can catch them, but should feel confident that they’ll be heading to the night session. Maryland is looking very solid, and just needs a clean vault rotation to close this out. For Ohio State, bars can be a big score, so the Buckeyes have a shot at catching the Terps. Nebraska is usually an excellent floor team, but all bets seem to be off tonight. The Huskers may find themselves in the Big Ten early session. MSU’s 49.3 on bars is a HUGE season high score. The Spartans should be thrilled with that. They’ll move to beam wondering if they can catch the Huskers, which would be a MASSIVE upset.

Farina (MD): FTY, nice. stuck. Falls to the side a bit but covers with a salute. These teams are FIGHTING.

Hearing that beam scores have been very slow, long waits for the Spartans.

Mitchell (MSU): She looks very calm. Bhs bhs loso, way off line on the second bhs and she falls. Split + straddle 1/4 nice. Side aerial full, big step forward and low chest. Not her best by a long shot.

Schweihofer (Neb.): Full in, nice control on the landing. She looks very happy with it. Front lay rudi, great body position. Switch half wolf full. Double tuck, massive, great landing. What a finish for the Huskers.

WOW WOW. Wow. This meet you guys. A huge 49.475 on floor wasn’t enough to propel the Huskers into the night session. We’ll see them in the afternoon next weekend, along with MSU. The Spartans struggled a touch on beam and fell well behind the field. The Illini will be ecstatic with this performance and will carry huge confidence moving into Big Tens, which they are hosting. Maryland and Ohio State will also be happy to qualify into the night session, though both have some work to do to challenge the rest of the conference. Phew. If the next Big Five is this wild, we’ll be in for a very interesting conference championships!