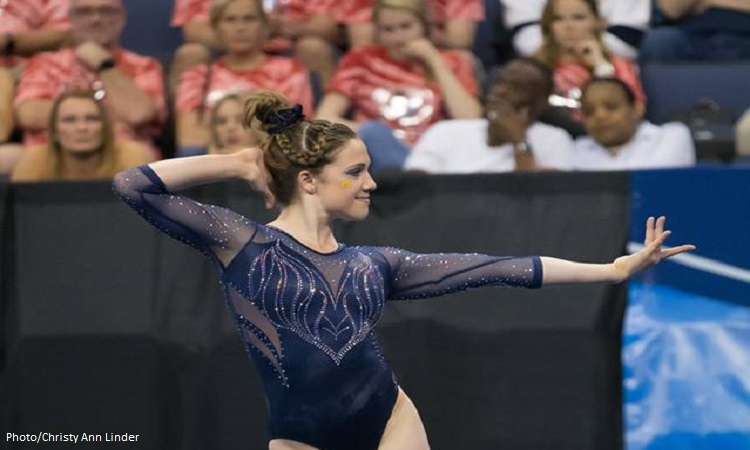 The top three here are pretty clear cut. Michigan is the easy favorite and will be looking to use this weekend as a tune up for the championships next weekend. Minnesota and Penn State should battle over the second place spot, but both teams should qualify to the night session, barring any meltdowns. If the Nittany Lions get through what can be a messy beam rotation cleanly, they will be feeling good. Minnesota needs to focus on putting up a solid six on vault, the Gophers’ problem event. Iowa could potentially catch either Penn State or Minnesota if one has a very off night, but the Hawkeyes likely won’t be able to do so without some major mistakes from the field. Rutgers’ focus here is putting up full lineups—last weekend the Scarlet Knights only put up four bar routines due to injury and scored below a 190—and pushing toward a 195.

A brief disclaimer regarding BTN: We will only see highlighted routines, likely focused on the top of the field, so expect a Michigan-heavy experience. I’ll blog every routine we see, but we will certainly miss quite a few.

Our projected lineups for the Big Five Meet. #GoBlue pic.twitter.com/7IVdpqjc78

The beam team will get us going! They are ranked No. 25 in the country with a 49.040 RQS. Are you ready #Gophers!? Let us know if you are watching or following along today. #LoveTheBattle pic.twitter.com/TziKpG7Eqd

HERE WE GO! Last time Michigan was in the RAC it took home the Big Ten title. What will see the Wolverines do tonight?

Louis Levine telling us about the new RU gym on the way. Says, “Everybody better look out, Rutgers is coming.”

Polina Shchennikova (UM): FTY, some pike, just a teeny hop straight up. They could give her the stick.

Nikki Youd (Iowa): Jumping into the middle of her routine. FHS front lay front full, lands low and biggish step forward; she was archy on the lay and didn’t get a great block. FHS rudi, nice.

Lexi Funk (UM): FTY big, tiny hop back. She was a touch piked in the air.

Olivia Karas travelled with the team, and is wearing her Big Ten champs ring.

Melissa Zurawski (Iowa): This is such a dramatic and intense routine. Double pike, landed a little low in the knees. FHS front full front pike, just a little loose. Switch side popa popa, love to see two popas in a row! FHS rudi, slightly short on the rotation and pikes it down a touch.

Lexy Ramler (Minn.): Side aerial + full, stuck. Frustrated we missed this routine! She can be stellar here.

Well, those are not quite the scores any team was looking for. Michigan was decent but not amazing on vault. The Wolverines played it safe, having McLean only vault a full. Iowa had no disasters on floor, but also no very high scores, perhaps partially a symptom of starting on floor. PSU counted a 9.525 from Ava Verdelfor as well as a fall from Tsang, because Tess McCracken also fell. Not a great start on the Nittany Lions’ best event. Minnesota also struggled, with three falls. The Gophers are on bye next, so they’ll have time to regroup.

A side note: Mable is a very solid commentator! Loving her so far.

Zurawski (Iowa): FTY, STUCK. Just some knees in the air.

Snyder (Iowa): This Hawkeye team looks loose and happy dancing. FTY clean, piked a touch and hop back and to the side.

Zaziski (UM): Tkatchev, giant. Great handstands. Bail hand toe shoot. She ATTACKS handstands. DLO, sort of stuck. Shuffled one foot a teeny bit, not sure if judges saw (it was right in front of the camera).

Belle Huang (RU): My feed keeps sticking in the same spot. Will jump in when it returns! Seems to be a Hulu glitch. FHS rudi, nice.

Great bar rotation for Michigan. The Wolverines are rolling and should be feeling good after two. Iowa was clean on vault and is capitalizing on mistakes from PSU and Minnesota. The Hawkeyes may sneak into the night session. PSU is now heading to bye, with the opportunity to calm down and reset after a rough start. Minnesota is coming off bye to one of its best events, so look for the Gophers to have regrouped and go big on floor. Rutgers had an excellent start, and will be looking to follow in Iowa’s footsteps and try to capitalize on the other teams’ mistakes. After two, it seems clear that scoring here is tight. Not absurd, but classically Big Ten strict.

Gardner (Minn.): Looong wait for the judges. FHS rudi loso, not the highest, Mable saying she may have been OOB but couldn’t tell on camera. Switch half popa, huge. Double tuck, jumps up on the landing, but great chest position. She’s really performing her choreo.

Phew this one is shaping up to be surprising just like the first session! Michigan is easily sailing and will look to use the bye to get set for a big floor rotation to close it out. Iowa continues its great meet with a big 49.1 on bars. The Hawkeyes are definitely taking advantage of PSU and Minnesota’s rough starts. Rutgers is also capitalizing. Minnesota came back strong, but still has some fighting to do to push into the top three. Penn State hopefully reset during the bye and can use floor to regain some footing here.

Kristen Politz (PSU): 2.5, gorgeous in the air, just a step to the side. 1.5 front lay, lost some height on the lay. I missed her jump, but it was a touch wild. Garcia is JUMPING behind her. 1.5 punch front, steps out. Took maybe two steps, maybe three.

Alissa Bonsall (PSU): She looks anxious, coach Brown trying to get her to loosen up. These floor judges are killing me. Waits for every floor team. Here we go. Aaaand camera cut away.

Abby DeMuse (Minn.): FTY, nice! Just a small hop. So good to see her back post ACL and a host of other injures.

Chow (Iowa): Bhs layout two feet, misses and falls. That one hurt. Foot slid down the beam, ginger on ankles. She salutes and she’s done. Rough way to end for Iowa.

Iowa’s night is done; now the Hawkeyes wait and watch. Chow’s tough fall is a challenging way to end this meet. Hopefully we’ll see her back next weekend. A usual floor rotation from Michigan will easily take the Wolverines into first over Iowa. Minnesota is closing in on Rutgers. Minnesota is a solid bar squad and has the advantage over a Scarlet Knights team that sometimes struggles on beam, especially if Makenzey Shank, who was missing from bar and floor lineups, is out of beam. Penn State is still fighting. The way this meet has gone, who knows what could happen.

Larissa Libby saying that Chow has been struggling with an injury, so perhaps stopping beam was more about protecting her long term than about a new injury tonight.

Bonsall (PSU): FTY clean, small small hop, and a bit off to the side.

Shannon Ferrell (RU): There was a fall in the leadoff, so pressure is on! Beat + side aerial solid. She is calm. Bhs loso, biggish adjustment, lifts leg. Switch + split, small wobble. Split 3/4. RO 1.5, big step back. Tried too hard for a stick.

Gianna LaGuardia (PSU): FTY, pikes down and a step. Not her best.

Brown (UM): Coming in partway through. 1.5 front lay some arch.

PHEW WE MADE IT. Michign sailed through. The Wolverines are confident and prepared. This 24 for 24 showing is a great step in their mission to win a fifth Big Ten title next weekend. Iowa surprised and slipped into the night session, having a steady performance while some of the field faltered. Minnesota came back with enough on bars to take over the third place spot. Penn State and Rutgers will join Michigan State and Nebraska in next week’s morning session.

Keep in mind that seeding for Big Tens doesn’t REALLY matter: any of the ten teams can win. Scores just tend to be higher at night, and the crowd is usually bigger.