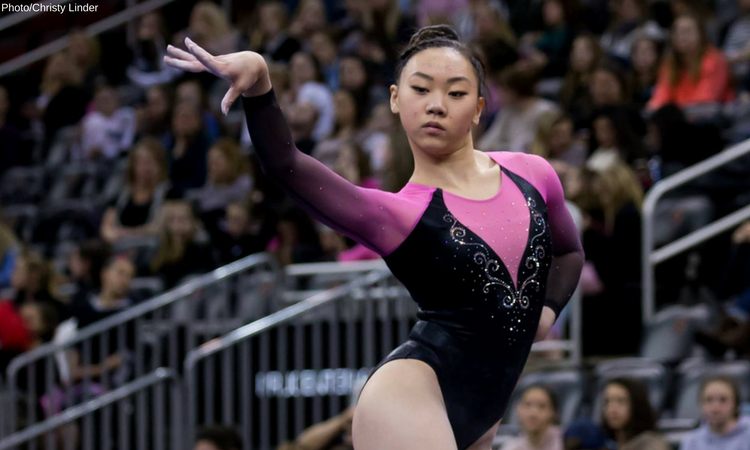 Thirty six of the top level 10 gymnasts in the country are competing in the Nastia Liukin Cup in Chicago this year. The Cup features a deep and fascinating senior field that includes three former NLC champions and five 2018 graduates who will be NCAA-bound in the fall. The junior group is full of future stars and not only in the collegiate arena: Many have trialed elite in the past year.

Some things to watch:

The Cup will begin at 8:30 p.m. ET and will be streamed on NBC Live Extra as well as broadcast on the Olympic Channel. The start list is here, and live scores can be found on MyUSAGym.

Check out our preview of the meet here!

Things have gotten started on the live quad feed! So far junior leaders are Gabby Gladieux who scored a 9.725 on vault, and Faith Torrez-Foster with a 9.6 on beam. In the seniors, Haleigh Bryant and Natalie Wojcik lead the field with 9.875 and 9.75 respectively on vault.

Anna Roberts of Metropolitan did a beautiful floor routine, and Amari Celestine had a stumble back out of a full in but did had a super fun routine set to Don’t let me down. MG Elite’s new prodigy Olivia Greaves was a bit shaky on beam but got a hit.

Doggette (UB) – flung out a double lay but nearly stuck it

Morgan (VT1) – aggressively piked fty on both attempts, landed with chest down.

Gobourne (VT) – Just FTY with a few steps back for the first vault I think. 1.5 for the second with a lunge forward, she’s got the whole set going.

J. Gutierrez (UB) – great positions, full out dismount with a hop in place.

Lane (UB) – Chow is lovely! Shy on just a few handstands, double back dismount and a good landing.

Salcedo (BB) – Fabulous so far, so secure, side aerial, front tuck. I think that was a straddle 1/2. DOUBLE FRONT DISMOUNT with a step forward.

Garcia (FX) – Nailing landings… op spoke too soon, double back to her knees. That looks like it hurt.

Chio (BB) – FTY, not the most dynamic because she’s two and a half feet tall but stuck DEAD. I think that was the second one.

Dekanoidze (VT) – 1.5 and stuck. Okay, girl. Step forward on the second but damn. There was some body position, but STILL.

It looks like Maya Bordas and Alexa Al-Hameed pulled out last minute, which sucks.

Roberts (VT) – FTY straight to her knees, looks painful. Limps back, but I think she’s fine.

Casali (UB) – Free hip to Maloney, bail is great. Short on a handstand, I think that was a double arabian dismount.

Vetter (VT) – FTY, deep but held onto landing for a bit.

Johnson (FX) – Double lay is beauuuuutiful. Full in with a lunge but nothing crazy. Such a unique routine I love.

Doggette (BB) – Big check on her kickover, hand down. Might take her out of the title race.

Quay (VT) – Massive, airy FTYs with a similar step back on both.

Bryant (UB) – Nice Jaeger with messy legs on catch, missing some handstands, blind change to double front with a step back.

Wilson (BB) – Thhink I saw a check. Double pike with a hop back is lovely.

Li (FX) – Already knows how to make a lunge look college-y. Intense music and she is getting everything out of it. Couple of awkward steps back on her double

Morgan (UB) – Massive air on her shap to pak, I don’t know if that was a double front our double arabian but she was basically done with the saltos by the time she was back under the bar.

Chio (UB) – off on a Jaeger, fingertip catch and couldnt quite make it. Few steps back on the double layout.

Garcia (VT) – First FTY was great, just with a hop back. Second had some body position.

Lane (BB) – Front aerial to split is great, tentative on acro series but holds on.  Double twist with hop back.

Dekanoidze (UB) – Stalder to Maloney to bail, great half in half out dismount with a tiny hop.

Wojcik (UB) Handstands are beautiful, great Jaeger, a tiny bit off on bail. Double layout almost stuck, had to take a hop forward.

Lukacs (VT) – DTY with a hop and then a step back. Second one much better.

Gladieux (UB) – I thought I saw a Deltchev but it could have been a messy catch on a Jaeger. Full in dismount also a bit messy but secure.

Johnson (VT) – Crashes first DTY to knees, second one is great with a little hop

Vetter (UB) – Some messy legs on bail, but solid with good handstands.

Quay (UB) – super weird fall, I think she missed a hand on a kip on LB and landed hard on her back. She looks okay.

Gobourne (BB) – Questionable splits but patient and steady, cat leap switch side is her best of the set. Big hop back on I think a double twist.

Salcedo (VT) – Huge air on an Omelianchik, you can see she’s been looking to upgrade that. Step forward on her first, just about holds the stick on her second.

Wilson (FX) Double layout not quite her normal air but still pretty special, straddle series is insane as usual.

Greene (VT) – FTY is nice in the air with a step back.

Dekanoidze (BB) – Flic loso is secure, double twist dismount with a hop back.

Widner (VT) – Solid pair of FTYs, some of the best of the day.

Celestine (UB) Maloney to clear hip, finds the handstand. Bail to stalder to Ray, the POWER on this girl. Full out dismount with a hop.

Greaves (VT) – Clearly has good landing instincts, twists really slowly on first FTY and it’s a bit off. Finds the stick on the second.

Bryant (BB) – Front aerial – bhs is good. Little check on what looked like a punch front, hop back on very clean 2/1 dismount.

Salcedo (UB) – I think has to take a couple extra swings to get her Pak, beautiful from there out, toe on front tuck dismount.

The two UNC commits are 1-2 in the junior standings. Coaching staff screenshotting aggressively.

Torrez-Foster (BB) – great Jaeger, little leg flicker on bail but works it out, comes in deep on DLO with a lunge forward.

Wojcik (FX) – Bit of a rebound on double pike landing, not what she needs to do if she’s trying to win this – second one is better. Stellar leaps, Rudi to straddle was beautiful.

Lukacs (BB) – Kickover steady, flic loso with a bit of legs, good side aerial. Overrotates full turn but works through it, switch side with a lean back. Double back dismount deep but stuck.

Celestine (BB) – huge amplitude on leaps, lean check on one. 3/2 dismount with a college stick.

Rucker (UB) – double front, dropped straight down and stuck but REALLY close to the bar

Bryant is into first in the seniors, only realistic winner is Andrea Li who would need a 9.775 to tie. Her career high is a 9.85 so it’s doable.

Johnson clean through bars, Tory Vetter putting together a great set on beam.

Li (UB) – Nailing handstands, blind change to Endo to Jaeger MILES above the bar, great Pak. Chow 1/2, full turn to double back with a baby step. It’ll be close but that was incredibly classy.

Haleigh Bryant wasn’t a particularly shocking winner, but the quality at the end of the meet as she went up against Andrea Li was stellar. The meet came down to Li’s third pass on floor, unfortunately, but those two stood out from the first rotation. Natalie Wojcik also had one routine lower than her typical level, but her beam was probably the routine of the meet. Also, don’t forget that third-place Raegan Walker is a Kentucky commit!

Juniors went a bit whoever-doesn’t-fall by the end, so incredibly impressive for Tory Vetter to put in one of the best routines of the meet on beam to nab the title. Clearly, her recruiting stock just went through the ceiling. The top three juniors are uncommitted to college, but #4 and #5 are committed to North Carolina – an outstanding day from them too.