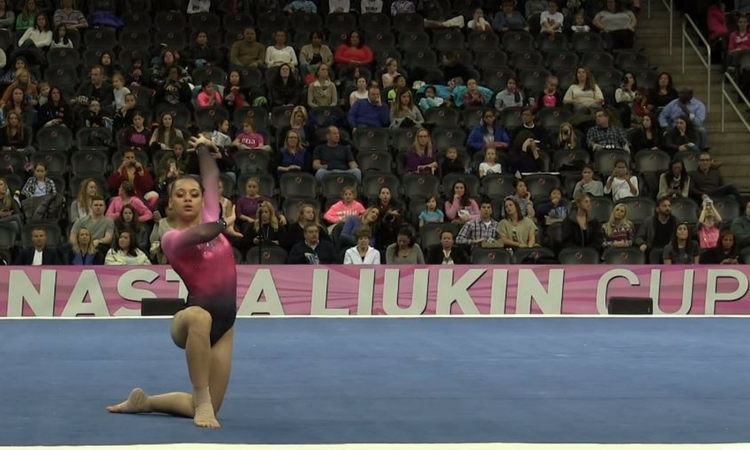 We’re only a few days away from the 2018 Nastia Liukin Cup, so we’re breaking down the field for you. After seven weeks of qualifying invitationals we have a full field of 36 gymnasts, many of whom are already on the way to Chicago for the meet on Friday.

Five gymnasts in the field are high school seniors and will be heading to college next year. Maya Bordas is signed to California, Rachael Lukacs to Georgia, Natalie Wojcik to Michigan and Derrian Gobourne to Auburn. Alexa Al-Hameed was verbally committed to Oklahoma but did not sign during the early period.

Derrian Gobourne and Chae Campbell lead the field in qualifying scores, registering matching 39.025s to qualify to the Cup. Haleigh Bryant’s 39.000 was the third-highest score, with Ashley Lane and Kiya Johnson rounding out the top five.

In the junior field there was another tie for top qualifying score; Lali Dekanoidze and Jimena Gutierrez both scored 38.500 in their qualifying meet. Olivia Greaves was third with a 38.475, followed by Kailin Chio and Faith Torrez-Foster.

Natalie Wojcik is the oldest gymnast in the field, born October 1999. She’s one of only three eighteen year olds at the Cup, joined by Rachael Lukacs and Gobourne. Eleven-year-old Chio is the youngest competitor—she was born July 2006.

Twenty two of the 36 gymnasts in the field are signed or verbally committed to an NCAA program. Michigan and Cal lead the virtual field, with three commits each qualified to the Cup. North Carolina, Denver and Georgia each have two. Finally, Alabama, Arizona, Auburn, Iowa, Kentucky, LSU, Michigan State, Oklahoma, UCLA and Utah have one representative.

Junior qualifier Kaylen Morgan registered the highest bars score of the group, a 9.775. Chio and Raegan Walker were next highest with matching 9.750s.

On beam, Campbell and Lane showed 9.800s in their qualifying meets while Bryant and Dekanoidze registered 9.775 each.

The top five floor scores all belonged to SEC-committed senior qualifiers; Lukacs scored a 9.875, Johnson a 9.825, Gobourne a 9.800, and Bryant and Doggette each had 9.750s. Amari Celestine’s 9.725 leads the junior division.

For more numbers, check out our qualifiers spreadsheet below, and watch out for continuing Nastia Liukin Cup over the weekend!