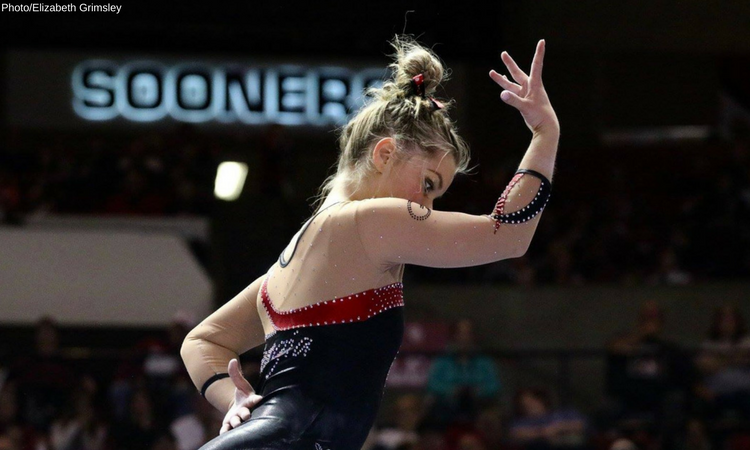 Elevate the Stage brings its fourth edition of 2018 to fans Friday night as Nebraska, Georgia, Stanford and Illinois square off in Augusta, Georgia. Many of these teams have been hot and cold this season, having pretty high highs, as well as some rather low lows on their way to their current RQS rankings. Nebraska, in its first of two meets this weekend, will have a goal of dropping one of the pair of 195s still being calculated into its RQS. Georgia has an opportunity in Augusta to shoot up the rankings from its uncharacteristic current placement of 17th. With a 194 road score still to drop, the Gymdogs are poised to move as high as 10th with a big number, according to The Balance Beam Situation. Stanford’s main barrier this season from sitting in the 20s in the rankings or landing a seeded spot at regionals has been bars. While the team finally has six gymnasts with a routine, the Cardinal still had to count a fall on the event last time out. The main goal will be to put up at least five hits as well as show potential for the performance to be more than just the Elizabeth Price and Kyla Bryant show. Finally, Illinois has had an underwhelming season after losing not only its former head coach Kim Landrus to N.C. State but also Lizzy Leduc, Brielle Nguyen and Mary Jane Horth to dismissal, transfer and injury, respectively. The main goal here will be to put up a 196 road score and improve its RQS to potentially move into the 20s in the rankings next week.

It should be an exciting matchup with four solid teams that could potentially take the title if things go their way. And, since it’s a quad meet, bear with me as I try to give you guys quick hits of as many routines as I can.

A+ so far for Brandie Jay who’s saying they not us. Although I do see Ashley Foss holding her camera wrong in the background of vault.

Vega (UGA), vault: FTY with a hop back, I can tell Brandie’s going to be an “everyone is awesome” commentator

Navarro (Stan), bars: missing some handstands here and there, hits her Tkatchev, some form on her pack, throws the ftdt and under rotates a bit and steps forward

Roby (Neb), beam: solid on her front aerial to bhs bhs series, hits her leap series, a bit of a non-smooth full turn, she’s got some MAJOR pigtail buns going on, hits her side aerial full dismount with a slide back but a good lead off

Biondi (Ill), floor: wearing the really pretty new leo they debuted this year, opens with a solid double pike but kind of rebounds out, really nice double tuck with a much better landing, fhs to front lay to a bit of a hollowed front full but a nice routine

Dickson (UGA), vault: FTY with a hop back, smaller than Vega’s hop but chest down some

Johnson (UGA), vault: nails her FTY, best of the lineup so far

Snead (UGA), vault: does her Y1.5 but looks like she tries to stick too hard and sits it

Schweihofer (Neb), beam: bhs layout two-foot hit but some form, switch to a nice switch half, I’d like her to bring her eyes and chin up more, sticks a ro double full cold to close

Bryant (Stan), bars: hits a clean but rather low tkatchev, nice pak, hitting her handstands well, you can tell she’s miles better than the rest of the lineup, double layout with a step back, 9.825

Breen (Neb), beam: has had some troubles this year but has been more solid as of late, hits a nice one-arm bhs loso, double stag ring, she could also use more eyes up in her routine, just compare these with a team like LSU or Oklahoma and you can see the differences despite the skills being there, a bit short on her leap to sheep combo, small hop on her dismount but another hit

Price (Stan), bars: nails her release combo absolutely fingertips, perfect handstands and a stuck double lay, a 10 if I’ve ever seen one but like scores and these Elevate meets… 9.950

Hassel (Neb), beam: nice sharp movements, lots of Huskers doing sheep jumps, some more successful than others, closes out with a solid dismount

Balthazor (Ill), floor: huge double tuck with a chest up landing, her form and style is gorgeous, more people need to know about her, also that toe point–love, finishes with a one and a half to front layout, a great great routine for her, once she becomes more consistent overall, she’s going to be a thing for Illinois, 9.850

Georgia 48.200 only went five up and had to count Snead’s fall and highest scores were only two 9.8s from Johnson and Dickson… So where’s that Natalie Vaculik

Howell (Ill), floor: nice solid double tuck, using a cut of Apologize and a couple other similar songs, hits the rest of her passes but the real selling point is her neat choreography

Houchin doing an exhibition on beam for Nebraska.

Schild (UGA), bars: under rotates her double layout and has to hop/step forward with her chest down

Flam (Stan), beam: could also do to pick her eyes up some, big bend over wobble on her front tuck but saves it, solid switch side, front full dismount with a step back and to the side, fine routine but that big wobble in there will cost her

Oakley (UGA), bars: beautiful pak, nailing her handstands, just a hop back on her ftdt

Price (Stan), beam: bhs layout two foot, looked like she was off to the side of the beam but saves without a wobble, small balance check on her full turn, switch to split jump solid, ro STUCK double pike with just some staggered feet

Williams (Neb), floor: huge double pike to open, nice chest up and a “let’s go” from Chris Brooks, second pass is a front layout to rudi nice, tour jete half to popa maybe not rotated all the way around, hits a good landing on her finishing double tuck, can’t believe she’s a senior

Bryant (Stan), beam: “our game plan is to throw all the difficulty we can and have fun doing it”- Tabitha Yim, full turn is solid, huge floaty bhs loso with a little foot readjustment, switch split JUMP, front tuck with a slight balance check, finishes with a bhs bhs double tuck with a step, can’t wait to see more of her in the coming years

Schweihofer (Neb), floor: big tuck full-in to open, using same music as Isis Lowry and that anti-cigarette commercial that played all the time on Freeform, front lay to rudi to near out of bounds but saves it, ends with a wonky-landed double salto last pass

Fitzgerald (Stan), beam (exh): caught the tail end and she closed with a ro 1.5 with a medium step

Hutchinson (Neb), floor: opens with a double pike chest a bit down, 1.5 to front lay a bit of an uncontrolled step forward on the landing, rudi to close with a weird almost-bucked landing, I think she was an exh as well

H. Hoffman (Stan), floor: front through to rudi, not much height but a solid landing, ends with another solid front tumbling pass to a double stag

Arnold: switch to tuck full with a leg up wobble, front aerial to almost a dive bhs but solid, switch to straddle quarter, her back leg in her switches are rather crooked, but solid dismount and more importantly a hit

Lyons (Ill), bars: off the bar on her release, was a manager in her fifth year of school but asked to join the team to help add depth on bars for a RS year

Oakley (UGA), beam: solid bhs loso, only takes up, like, half the beam, hits her cartwheel to gainer full

Flam (Stan), floor: only saw the first and last passes but both super nice and first double arabian was a beaut

Babalis (UGA), beam: front aerial to loso with a stumble step on the landing, tries to save it and splits the beam, switch leap to straddle jump to back tuck with a wobble, you can tell the fall rattled her, leg up full turn, pike kick over is solid, closes with a front full with a small hop

Lawson (Stan), floor: finishes with a slightly squaty double pike but a nice routine from what I caught

Bryant (Stan), floor: huge double layout with a step forward, front through to double pike with a step out of bounds, finishes with a no-hands double tuck, her choreo is so aggressive and shown off, go teach Flam!

Vega (UGA), beam: switch ring with a slight check, bhs loso solid, full turn nice, cat leap to front aerial nearly perfect, switch to split quarter with an arm circle to save it, side aerial to stuck on her toes full, not her best but solid

Price (Stan), floor: nearly stuck double layout because Ebee, same thing with the double tuck but this time completely stuck, switch side popa good height and positions, finishes with a beautiful double pike with a casual step back, just as good as her 10 she scored a week or so ago, 9.9

Arnold (UGA), floor: opens with a double pike with check down and staggered feet, random front aerial, second pass is a double tuck with chest even further down than the first, neat leap pass to a Ohashi-style split to the ground, closes with a 1.5 to front lay a little under rotated but a hit for Georgia who’s going five up

Cole (Stan), beam: FTY with a step forward and landed a touch low

Navarro (Stan), vault: FTY some form in the air and a hop back but decent power

Roby (Neb), bars: blind to straddle jaeger with some feet, pak to slightly short half pirouette, nails final handstand, dismount with a step back

Flam (Stan), vault: Yurchenko half-on pike with a huge bounding step forward, she hasn’t really been her J.O. self since coming to college

Bryant (Stan), vault: FTY small hop back but lots of power, she does a Dasha Joura-esque salute and it’s my life

Price (Stan), vault: does the DYT with just a step back but basically perfect in the air so that’ll be the only deduction

Snead (UGA), floor: great, chest up in her whip to bhs bhs double tuck, fhs rudi to shush, switch to cat leap which is a weird leap pass but the other wasn’t working so a smart change, chest down on final double pike but a solid landing despite that

Vega (UGA), floor: hit her double pike well, 1.5 to front layout to immediate choreo, switch ring to tour jete half, does another tour jete half (might have been a full?), closes with a hit and chest up double tuck, 9.975 for her, which ok? I guess it was the best of the night but also Elizabeth Price?

Hutcherson (Ill), beam (exh): a Georgia girl, bhs loso with a small wobble, splits the beam on her leap but stays on without falling off, kind of losing it now but technically hasn’t fallen, finishes with a stuck gainer full