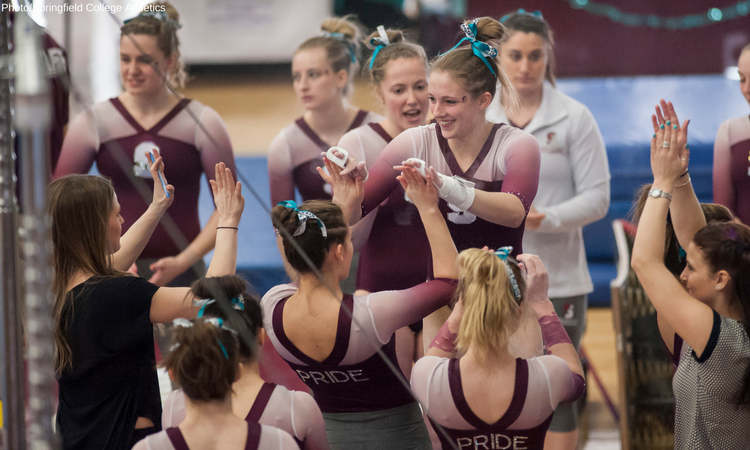 The top three Division III teams held their spots this week; Brockport maintained its lead as RQS kicked in, allowing it to drop a difficult week. UW-La Crosse’s season-best week allowed it to hold of Ithaca College in the third spot. The mover of the week was Centenary College, which jumped up to fifth from seventh place after two consecutive season highs on Friday and Sunday respectively. Note that for nationals-qualifying purposes, Division III does not use RQS but instead SAS, which takes four scores, at least one home and one away and no more than one from a DI/DII non-conference meet.

The two leaders of the WIAC faced off at Whitewater on Saturday. La Crosse claimed the team title, as well as all five individual titles—though La Crosse’s Lauren Wilson tied with Franchesca Hutton of Whitewater on floor. It also set a season high and its third 190+ of the season. As we head into March, the top DIII teams are beginning to differentiate themselves with the ability to score in the 191 to 192 range. In 2017, only one 193 was scored in DIII, but it wouldn’t be surprising to see multiple teams reach that level this season.

Whitewater set its second-highest score of the season in its only WIAC loss of 2018, and its 47.55 on beam is a top-20 result in program history. It was also senior night in Whitewater, and the team honored its five seniors after the meet. As the reigning WIAC champion, Whitewater will be looking to assert its competitiveness with La Crosse over the coming weeks, so watch the scores these two put up leading into the conference championship.

Texas Woman’s emerged victorious from another home quad meet. Senior Schyler Jones dropped bars from her usual all around set after a few difficult weeks, and it paid off; she recorded a 9.800+ on each of her other three apparatus. Mallory Moredock had a similarly strong day, and bars champion and 2017 team MVP Bria Northrop added beam for the first time this season—an exciting development after a presumed offseason injury has restricted her to only bars to start the season. The Pioneers scored convincingly even with three sub-9.500 routines on beam; this hint that the team is close to 196 caliber on a hit day might be the most exciting part of the result.

Bridgeport recovered from last weekend’s hiccup to record another mid-194; through the rest of the season it will be interesting to see if the Purple Knights can break into the 195s. In recent years, they’ve been by far the most consistent performers of the top USAG teams but sometimes lack the higher ceiling necessary to compete with a peak TWU or Lindenwood. However, Sunday was promising for the Knights, with four scores over 9.800 and an all around title for Kelsey Campbell. Maya Reimers’ team-leading 9.850 on floor was a stand-out routine, and freshman Kathyrn Doran continues to be a huge asset.

Centenary set a season high for the second time of the weekend at TWU. It’s really difficult to understate how impressive a high 191 is from a team that opened the season in the 170s. This isn’t atypical for the Ladies, who continually have one of the highest talent levels in Division III but can be streaky performers. Putting everything together twice in a weekend is a very promising sign for this team. In particular, junior Navia Jordan continues to stand out, scoring 9.800+ on both of her events at this meet.

Lindenwood impressed on senior day, scoring a season high and registering another Division I win over Illinois State. Emily Milliet led the team to a season high 49.025 on beam that included four 9.800+ scores, and sophomore Ryan Henry won the event title on bars. Lindenwood’s two seniors competed a total of four events on senior day: Kierstin Sokolowski impressed on her usual three, scoring 9.800+ on all of them while Kayla McMullan had a 9.750 on floor. As valuable as these two are, the youth of the Lindenwood squad will be a great asset in the future.