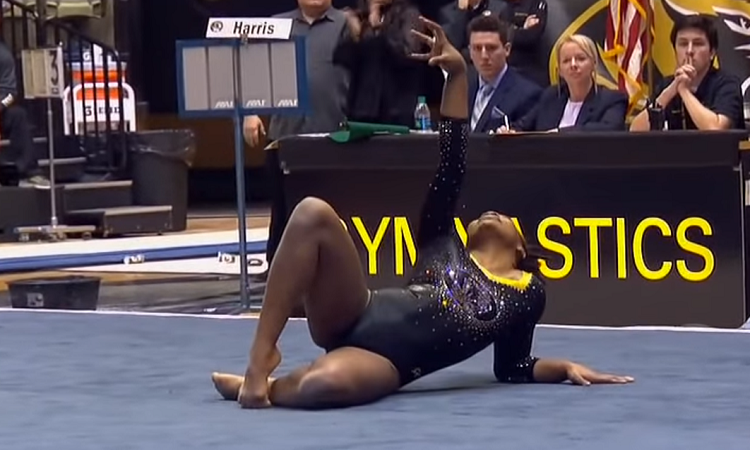 This meet is not quite as lopsided as it appears. While Illinois struggled early this season, its high score is only .025 behind Missouri’s 196.375. If the Illini put up a complete meet and Missouri falters just a bit, things could get very close. To keep pace early, Illinois needs to push its vault lineup of all fulls into the 9.8s, which means clean landings and eliminating bent elbows and piking. Illinois’ advantage comes on beam, where Bridget Hodan and Karen Howell excel. Missouri is the stronger floor team, capable of big numbers from Kennedi Harris, Allison Bower and Aspen Tucker.

While UIC is behind in terms of team score, this is still an important meet. The Flames currently lead the MIC conference, and a solid 194 away score would be a boost in conference standings when RQS kicks in on Monday. UIC is led by standout Mikailla Northern and freshman all arounder Ashley Albrecht, who has broken out in recent weeks. The team also features an exciting bar set from Toni Alicke, and Kayla Baddeley can put up a very dynamic vault. The Flames have all the pieces of a solid meet, and it will be exciting to see if they can break out.

This is a princess/superhero meet, so here are some adorable pictures of the Illini as kids to tide you over until we get started.

Friendly reminder from the Illini to dress up as your favorite superhero or princess for the Princesses and Superheroes Meet today at 4 pm! #Illini pic.twitter.com/AxICfp3cEG

It’s time! It’s time! But the feed hasn’t started up yet. If you’ve read any of my live blogs, you know that the Big Ten doesn’t exactly adhere to the timeliness and fast pace of the SEC (Friday Night Heights we love you). We’ll start…at some point.

We open the meet on bars! Our lineup… pic.twitter.com/HaBl9Imh0b

WELL no stream yet. I’ll stick with it in case they come back, but until then we’ll rely on tweets and scores.

Our stream is currently down. Use the scores links to follow alone. #Illini https://t.co/Du08U6how7

Aspen starts us off with a 9.85! Great routine ended with a STICK! #MIZ

Brooke goes 9.75! Beautiful swinging with only a small hop back on her double layout dismount.#MIZ

What a routine from Shauna for a career-high-tying 9.9!!! Hit handstands and a STICK!#MIZ

Morgan with a 9.875! Only a teeny step back with her left foot on her dismount!#MIZ

Kasey Meeks (Ill.): 9.65 Oof. She’s almost always around a 9.8. Tough vault rotation for the Illini. Without seeing any vaults, I’d guess they were hoppy and lacking amplitude, both chronic problems for the team. It’ll be an uphill battle to catch Missouri now.

Madeleine goes 9.875 as well! What a rotation!#MIZ

Ouch, Illinois. Missouri will be very happy with that excellent bar rotation, and UIC will also be excited with a season-high floor performance. Thankfully, Illinois’ two best events – bars and beam – are next. The Illini will need big hits on both to catch up.

GUYS WE HAVE VIDEO! And it includes commentary, which is new for Illinois streams. Hooray! This will get more exciting now.

Ashley Albrecht (UIC): Saw half of her FTY, pretty piked.

Givens (Ill.): Didn’t show most of the routine, double tuck with a small hop.

Kelly (Mo.): Off on front aerial, redoes it to connect to bhs, much better the second time. LOVELY straddle + sheep. Hop on front full dismount.

Exo, not announced (UIC): FTY, bent arms on the table, low and close.

Balthozor (Ill.): Gigantic Tkatchev + bail, little loose on the bail. Hop forward on half in half out dismount.

Much better from Illinois, but Missouri is on tonight. This could end up being close! UIC is also having a great meet.

Miller (Mo.): Can hear her music but the camera isn’t panning over. Announcer saying it was clean but not spectacular. Sure.

I think we missed a bar routine while the camera was on floor. Oy.

Howell (Ill.): Bhs layout to two, big step back and bends at the hips. Switch + straddle 1/4 chest a little low.

Riley Cholod (UIC): Ray, nice! Bail handstand, solid. Some problems on the low bar, has to do a few half pirouettes to get it right, nice double twisting dismount.

Michaelee Turner (Mo.): Not getting to see the this one, I guess. Double tuck last pass, nice.

Balthazor (Ill.): Ah, she’s off on the jump series. Not great, since Howell had the big break.

Hodan (Ill.): Think we’re missing this routine, which is a CRIME. Here we go. Switch, with a bobble. Beat + sissone. Cat + Illusion turn and she falls, not good for Illinois, now counting a big mistake and fall.

Mary Nicholson (Mo.): Tour jete full, love to see that. 1.5 front lay, some knees and archy. Switch side + popa, fine. Not the biggest performance quality for an anchor. FHS rudi, no problems.

UIC and Missouri are right where they want to be! Illinois struggling on what can be its best event is becoming a theme. This team lacks consistency. It’s unlikely the Illini will catch Missouri now. Missouri could very well hit 197 tonight.

After 3 rotations we have closed the gap on Illinois, now trailing by only 0.125! Missouri maintains its overall lead. We will finish on beam.

Maciel (UIC): Not getting to see this one.

I guess we’re just not getting beam this rotation. Sorry, UIC!

Balthazor (Ill.): She’s also a fun performer. Gets into it from the first beat. Double tuck HUGE, hops out of bounds. Tour jete full, gets it around. Tour jete half + split full, nice. This announcer just calls tour jetes splits and I’m losing my mind listening, because he’s otherwise super knowledgable. 1.5 + punch front, no power on the punch and sits the front.

A season high for Missouri! The Tigers will be happy with that going into RQS tomorrow. Illinois used a season high floor rotation to salvage what could have been a disaster meet, and puts up a score that will boost its RQS as well – home meets continue to be a struggle for the Illini. UIC just missed its season-high score, but will take this as an away performance!