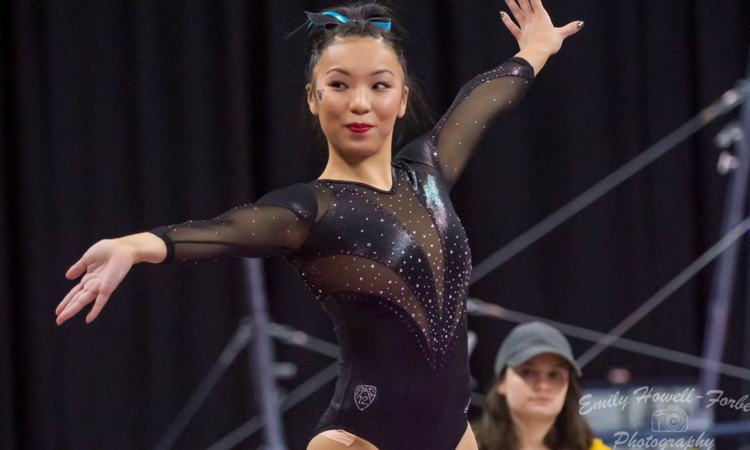 Washington returns home this week in search of its third consecutive 197+ score—the Huskies have been on a hot streak the last few weeks, and with a 195.725 to drop in RQS this week, a good showing could boost them even further up the rankings. Stanford, meanwhile, recorded a season high last week at Cal and will be looking to keep its momentum going this week in Seattle.

I’m always really interested in the match-up of Hailey Burleson versus Big Ranked AAer. This week it’s obviously Ebee Price, against whom she clearly is at a slight deficit on two events but could stay close to.

Big point from meet warm up is that Lawson was throwing the arabian on beam. She fell, but still.

It’s Washington’s Purple Strong meet, which is basically diversity plus some other good things that we care about! They’re wearing rainbow hair ribbons.

Freshman Taylor Lawson leads off on the uneven bars.#GoStanford pic.twitter.com/yFpabxi459

COPIAK – UW: Big full, usual leg separation on the table and a touch piked but STUCK.

Washington has a legit money gun that sprays fake money everywhere if someone sticks. Legendary. Coach Elise is screeching laughing.

LAWSON – STAN: Short on bail, legs split on full turn to cowboyed double back with a step forward.

NAVARRO – STAN: Low Tkachev, had to recast on low bar I think, legs and feet some of the best I’ve seen. Chest down on full out dismount and bounds forward.

FLAM – STAN: Toe blind with a flicker of feet, Jaeger is too far from the bar and isn’t close to catching it. Legs split out on bail as usual, misses a handstand on HB, full twisting double layout with a little step I think.

HOFFA – UW: Airy full, step back. Seemed a little surprised by the landing?

ROGERS – STAN: A bit low on the Tkachev, leg split on Pak, has to recast three times on LB and eventually gives up. Splits out of a full turn on high bar, jumps off and salutes.

That’s going to be a low score for an incomplete routine but she’s not hurt, just decided it was past saving.

BURLESON – UW: Massive distance on full, chest down as she leans forward to hang onto the stick but does it.

ROBERSON – UW: Biggest full of the rotation with a little step back.

Goings in exo for UW on vault, a bit pikey but controlled.

That was some grouchy scoring on vault. There were a few not of the usual caliber but even with a pike down, 9.75 for Copiak? 9.8 for Roberson?

Stanford had four gymnasts do some of their best routines, as well as two falls.

COLE – STAN: Nice full, a bit piked down with a shuffle back.

UW – NELSON: Blind change to Jaeger, released too late and caught with bent arms. Nice Pak as always, full turn with a leg flicker to double back and stuck!

NAVARRO – STAN: Quick full, leg sep on the table and rotated piked with a hop back.

ROBERSON – UW: Jaeger to overshoot is GREAT, tiny bit short on one handstand, double layout to another stick.

FLAM – STAN: Omelianchik, great with a bounce on her toes.

WASHINGTON – UW: Full turn to Gienger, my favorite release in the world. Great bail, full turn to double back and runs back.

BRYANT – STAN: Full, lower than her usual but great distance, little hop back.

COPIAK – UW: Church to overshoot with great dynamics, full in dismount, almost holds the stick but has to take a baby step to salute.

PRICE – STAN: Just the full but worlds different than anyone else’s.

BURLESON – UW: Half turn to Tkachev is great, this is one of her best so far. Tiny leg flicker on full turn, double back with a hop back. That was stellar.

Willmarth in exo for UW, big leg split on Maloney, great bail, full turn to double back with a hop back. 9.775 good for her!

Scoring is all over the place. Some super bizarre stuff is happening. Obviously not intensely clean from most people either, it’s just a weird day.

ROSE – UW: Front aerial – bhs is beautiful, Y turn to switch to beat is stellar, legitimately one of my favorite combos of the season. Side aerial to tuck back full with a baby step.

H. HOFFMAN – STAN: This routine is such a fun one, run back out of a double back. Rudi to double stag looks like she might struggle to control it but she makes it work.

COPIAK – UW: Flic loso, tiny adjustment. Switch half to beat jump is quick and secure, stick on 3/2 dismount and the money gun goes off.

LAWSON – STAN: 3/2 thru double back is GREAT. Closing double pike is nice and secure, good one!

GOINGS – UW: Got through her pre routine ritual of doing twenty ish acro series on the beam runway, and it pays off because the triple series on the beam is amazing. Great dance combo, full turn, gainer loso nailed. Side aerial back full, college stick, close enough that the money gun goes off. Not going to be super thrilled if that goes under 9.9.

FLAM – STAN: A touch underrotated on double arabian and her feet slip out from under her, sits it. Second pass is quality.

ROBERSON – UW: Killer on acro series, she is so aggressive and so secure. Cartwheel through gainer full, she gets such a pop on that skill.

BRYANT – STAN: DLO is so great in the air, just lunges too big on the first two passes to be zero deductions and a bit of a slide back on the third. Such a f

Nelson did a great beam exo for Washington!

Washington finally managing to pick up a bit of momentum.

COLE – STAN: Legs on acro series, but super clean and steady the rest of the way. Stuck double twist dismount, pops forward with chest at 90 degrees to hold it.

NELSON – UW: I love watching Nellie compete floor because she has the most smug little smirk the whole time. It’s glorious. The tumbling is all right too. Spends an eternity in the air on both double backs, nice secure landings. Great lead off option, I hope she keeps that spot.

N. HOFFMAN – STAN: Front aerial to beat with a bit of a lean. Bit of legs on acro series, overrotates full turn and has to lean to hang onto it.

ROBERSON – UW: Bit of a bound forward out of her front 2/1, just overpowered. Great Rudi-LOSO, I love it. Double back and runs back out of bounds, whoops haha.

FLAM – STAN: Sorry, I didn’t watch much of that bceause I was distracted by Burleson singing along to her beam music but it was nice and steady.

SCHAEFER- UW: Great double pike, she loves to press through her arms on landings to really show off the control which is great. Front comb pass is nice, bit underrotated on closing double back with a step forward

HOFFA – UW: Great double pike, she’s struggled t control that a bit the last few weeks. A bit off direction on front pass, it’s not really anything. Double back is WAY short, that looked uncomfortable .

BRYANT – STAN: So much air on punch front, how is that even a thing? Off line and fights to keep it on. Acro series was great earlier, lovely flight on double back dismount with a big lunge back.

WASHINGTON – UW: Not merforming quite at her capacity, maybe a bit nervous, but tumbling is fine. Two there that she didn’t need to lunge out of, money gun seeing some action from Maddie Copiak.

NAVARRO – STAN: Good one! Nice clean legs, pace back on double back dismount.

BURLESON – UW: Two absolutely STELLAR landings off the top there, a little too cautious on the 2.5 twist with a cross step back.

Roy had a great exhibition on floor for UW. Lawson hit exo beam, no Arabian that I saw.

That was lukewarm and inconsistently scored all around, just a weird day. But to be honest a victory this season is no Achilles tears and both teams achieved that so YAY. Run out of landings all you like, ladies. Do what you gotta do.