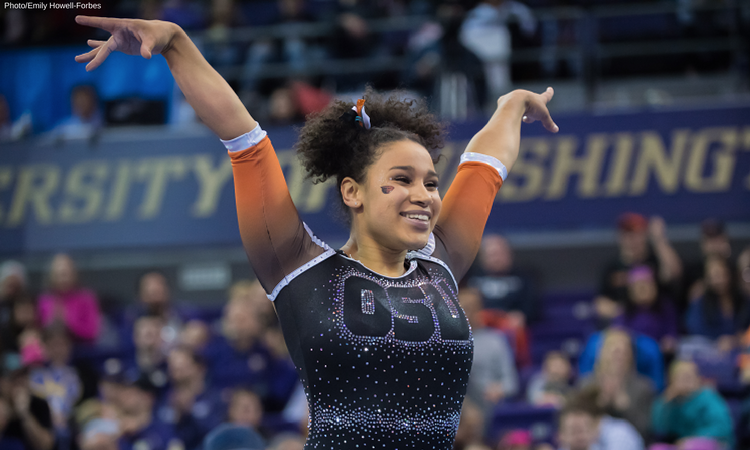 Oregon State set a season high of 197.3 at home last week and will be hoping to follow that great performance up with another strong day at UCLA to replace the road 194 it currently counts in its RQS. Beating that mark comfortably shouldn’t be a challenge—the Beavers’ minds will be on a potential upset of UCLA, which looked mortal at home last week in a difficult loss to Utah. The Bruins will be hoping to move past that blip on its otherwise incredibly strong season and register another high 197 to pad its already comfortable RQS.

Pauline Tratz being rested today for UCLA. Ohashi in on vault (completing her AA set) and Kocian in on floor. Anna Glenn is leading vault and replacing Sonya Meraz on bars.

No Dani Dessaints for OSU – her bad knee has been challenging her all season so she may just be resting as well. Luckily, OSU has plenty of tested options to fill her spots – it won’t hurt them too badly.

A. GLENN – UCLA: Y full, still not much distance but plenty of height. Hop in place, doesn’t have to hop forward like the past few weeks which should pad the score since it doesn’t look underrotated.

KHAMEDOOST – OSU: Maloney with a bit of a leg split to great bail, misses a handstand on HB, double lay, hangs on for a second and then hops forward.

OHASHI – UCLA: Y full with great body position, bit of a hop back.

MCP – OSU: blind change to Jaeger is great, good bail. double layout with legs together, hop forward like Shireen. This is that terrible angle where you can’t really tell handstands but I think the first kch was shy.

DENNIS – UCLA: Not quite prepared for the landing, dynamic but has to hop a little.

SINGLEY – OSU: Nailed first handstand, full turn to okay Tkachev, maybe not quiiiite perfect on bail? Full turn to double back, on top of the bar with a hop back off the mat.

ROSS – UCLA: Best full of the bunch, landed straight upright with a tiny scoot back.

HALL – UCLA: One of her best 1.5s, the usual slightly soft knees but dynamic with a hop straight forward.

JACOBSEN – OSU: Tkachev to overshoot with a tiny bit of feet, blind change to the usual lovely double front with a step back.

HANO – UCLA: Fairly deep on 3/2 with a hop to the side. Great block and so pretty in the air.

Heard that Halli Briscoe exhibitioned bars for OSU with a hit for 9.8! Kramer had a difficult landing on vault.

Not the sharpest start for either team on what can be really strong events. Interesting to see where it goes from here. Landings are not happening for either team.

Lena Greene not listed as 10.0 start in the P12 graphic, interesting.

SINGLEY – OSU: FTY, piked down aggressively but a stick!

DENNIS – UCLA: Maloney to bail is great, tentative on one handstand, double layout and pulls her heels together but holds it. That was stellar.

OHASHI – UCLA: Toe on, JUST over balance, really fights to pull it back and keep going into the bail. Good double layout with a baby hop.

HONEST – UCLA: Tkachev is HUGE this week, just the feet. Straddle back is good, pings off full in dismount with a hop.

YANISH – OSU: Flared out with a hop back. I think she can block higher and twist later than that and make it one of the best in the country – but we know she has her sights on a 1.5 too.

A. GLENN – UCLA: Great blind change to Jaeger, so pretty. Pak is lovely, aggressive on handstands. Full turn to double back, tiniest hop in place.

She looked nervous early – moving through very quickly and not committing to the positions as much as she can – but a great debut, I expect them to keep using that.

JACOBSEN – OSU: Tsuk full, off line with a hop back and diagonal. I’ve seen that one better.

LEE – UCLA: The normal routine, double layout with a hop back. Everything else was great, a big improvement from last week. Miss Val actually shoves her over to the student section for a high five circuit.

GREENE – OSU: Front pike 1/2, powerful with a big step back. It’s getting better in the air, I think!

ROSS – UCLA: Maloney to bail to toe shoot, great. Handstands are all there and DEAD stick.

Khamedoost in exo on vault, Kooyman on bars as per usual.

UCLA got its feet under itself there (hahaha, get it?) Glenn needs to be a weekly thing, even with some obvious nerves she was a highlight and once she learns to take her time on her swing she’ll be a 9.9 or more. OSU just can’t quite get in a groove, struggling on all of the landings. Nothing awful, just a bit January.

NGUYEN – UCLA: Full turn,  front aerial to loso off line – bends and falls. Switch to split is good, I love her split 1/2 jump, front full dismount stuck. Everything was great except the acro series.

KOCIAN – UCLA: Switch to sheep is solid, lands flic loso on her toes but settles it in. Front aerial, double full with a hop back. Good one!

JACOBSEN – OSU: Good double pike, hop into lunge. Great 3/2 to layout, I love this routine to DEATH. Fantastic leap combo. Bit of an awkward landing on the Rudi but pulls her arms back and makes it work – she’s really got the resilient veteran thing going this year.

GILL – OSU: Such a compelling performer, double pike is great even without a massive set – she’s so resilient these days. 3/2 front lay is beautifully landed, underrotated on double back and steps forward.

OHASHI – UCLA: Front aerial flic loso like it’s NOTHING. Switch ring is pretty, flic loso back full and pulls her heels together. That was pretty stellar.

SINGLEY – OSU: Front thru double back is great, perfect lunge landing on double pike. This routine is creepy epic and I love it. Great Rudi! Best one yet by far.

LOWERY – OSU: Lets her front foot slide a bit on double pike landing, same on Rudi, but performance quality is so high. Felicia Hano is dancing along which is amazing. Miss Val is pretending not to love it but she’s also watching and dancing a little bit. STUCK on last front pass, amazing.

LEE – UCLA: Great Homma, layout series is nailed with a very theatrical puff of beam off the beam. Double turn combo is great, lost pace a tiny bit in the combo but I don’t think it’s deductible. Side aerial back full is stuck, that HAS to be a ten.

Anna Glenn exhibitioned beam with a 9.9 from one judge. No floor exo from OSU.

What is happening??? There are four UCLA routines I’d have accepted a 10 for so far, including all of those 9.9s except Kyla. But it STILL ties the UCLA program record on beam, which is pretty wild.

Oregon State finally got some momentum going. The 9.9s for Lowery and Yanish were a little generous to me, with some clear landing deductions from both. Singley’s was stellar, though.

KOCIAN – UCLA: Front 2/1 is phenomenal, 3/2 front lay so airy. Goofy but cutesy routine, a much better fit than last year’s I think. Rudi double stag, that was actually a fantastic routine. Big hugs from coach Jo, she’s thrilled to be in that lineup.

Really interested in where the score ends up for this, it has much less flash than the likes of Yanish and Lowery but the landings were much better.

MINYARD – OSU: Nice and steady, I love her seeing her in lineups this year – always been a favorite.

KRAMER – UCLA: Near the line on her 2/1 punch front with a step back to avoid the line but she’s right on top of the landing, other two are great. This is such a fun routine.

LAZARO – OSU: Flic loso, aiiiry and pulls it into line with her arms. Beautiful leap series, side aerial back full stuck DEAD.

DENNIS – UCLA: Brand new pike full in is STELLAR, miles better than the double arabian. Apparently she texted Jordyn and said hey can I try this in training? and Jordyn’s like uhhh, I mean I guess? Nailed second pass, great leap series. So far this is far and away her best floor of the season. Double back drilled, that was FANTASTIC.

HANO – UCLA: DLO nailed, front foot stays, always love the running man jump. She seems like she gets more powerful every week. Great leap series, double pike, picks up the front foot. That was the only thing wrong with that.

DAVIS – OSU: Apparently she has a “spice meter” where she rates routines by spiciness of various chiles. This is also a super good routine, gainer front full dismount with a baby hop. That was a great recovery!

OHASHI – UCLA: Great double lay, baby lunge! I wanna see her stick that one of these days. Combo pass in the 2nd, great leap series, super controlled. front full front 1/2 to a switch split drop. That was spectacular.

UCLA could have gotten away with a few more 10s there, to be honest, but it was a still great recovery from a very lukewarm vault rotation. Finally a 198, which I believe moves it back into the 2 spot nationally. Anna Glenn on bars, Madison Kocian on floor, and Nia Dennis’ improved first pass are revelations. The only thing UCLA is missing at this point is those vault landings.

OSU couldn’t quite find its game today – but this score is a great improvement of the road 194 it would be counting in RQS otherwise, so there are definite positives. It’s been hot and cold on the road this week, but for a 196.5 to be considered an off day still means you’re doing pretty well. Scoring was definitely tight in that beam rotation, but they also got a bit of benefit of the doubt on floor so it probably evens out.