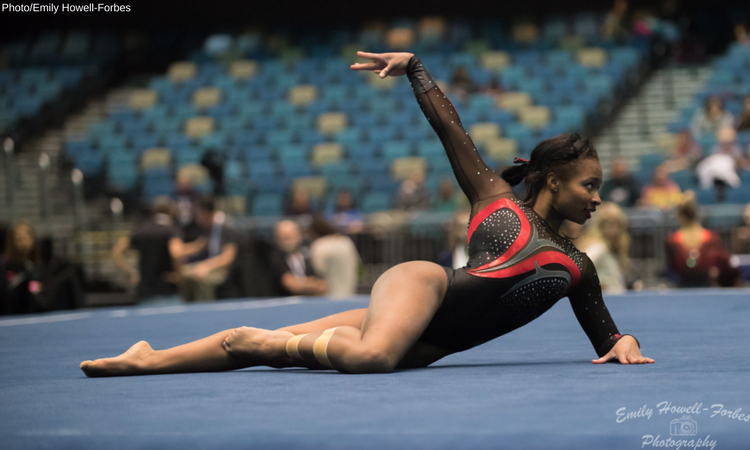 The Arizona Wildcats have scored significantly better at home than on the road so far this season and will hope to use that advantage to upset a resurgent Stanford as the Cardinal completes a run of three road meets. Things could get close between Tabitha Yim’s old team and her current one in Tucson.

Almost set to go in Tucson with first rotation on the uneven bars. Freshman @_taaayl leads us off.

Stanford has been putting five up on bars, so adding Cole in the sixth spot is huge!

It’s also senior night for Arizona </3 It seems like it’s too soon for that. Its seniors are Kennedy Schneider, Victoria Ortiz and Madison Cindric.

ARIZ – LEYDIN: Good FTY, piked down with a little hop.

STAN – LAWSON: Good first handspring, good van Leeuwen to bail with leg sep. Toe shoot to full turn on the high bar… oof… bends her elbows in the middle of that pirouette and has to really fight to stay on. Pushes through it, couple of giants into a double back and overshoots it, rebounds back and sits.

ARIZ – COWLES: Good dynamics on FTY, piked down and big hop back.

STAN – NAVARRO: Good Tkachev, handstands a little short but not as bad as we’ve seen at some points. Good Pak with the usual leg sep, missing another handstand, half in half out dismount with a baby step.

ARIZ – MATTSON: Y1/2, dynamic with a tiny hop forward. That was a great one!

ARIZ – BELLOWS: Y3/2 STUCK! A little bit of body position in the last salto but STILL.

STAN – PRICE: Maloney to clear hip to Church to bail, too much power, way over… and off. That’s not what we do on bars. Usual double lay with a hop back.

Arizona is scratching Swanson, happy with those five.

Stanford is scratching Cole… what was the point of that then?

That was a rocking vault rotation for the Wildcats. Season high is 196.325, if we want to start thinking about that.

ARIZ – SCHNEIDER: Kennady has sat out a few events recently, glad she’s back. Good opening Gienger, a bit of a leg split. Piked into bail but gets an okay handstand out of it, double layout with a hop back.

STAN – NAVARRO: Back on the table and twisting on, good body position on FTY with a hop back.

ARIZ – HENDRICKSON: Good Jaeger! Peels on a giant… what? Back up, double layout with a little bounce. That was flukey.

STAN – BRYANT: FTY, big and flared with a hop back.

STAN – PRICE: FTY, big and stuck. A little more piked than I’ve seen from her but… it’s a relative scale, you know.

ARIZ – SPENCER: Huuuge Gienger, toe on to bail. Handstands are phenomenal, double layout with a little step back.

STAN – LAWSON: Tucks one leg on one table. Lower amplitude but dynamic and okay landing.

ARIZ – BERG: Trying to drop a fall. Blind change to pike Jaeger to overshoot, lovely. Great handstands, full in dismount with hop back.

Arizona has some seriously gorgeous bars there. Stanford did a lot to recover from bars, though this is beyond being RQS-able at this point.

Apparently Arizona coaches were talking about how they really wanted to go six for six on beam and get some momentum. Oh, you should know you can’t say that.

ARIZ – HENDRICKSON: Beat jump to split 3/4, great. Flic loso, no feel on the beam and she stumbles off. Good full turn, switch to split 1/4. Side aerial, gainer full with a hop back.

ARIZ – LEYDIN: Good wolf turn to open. Switch to split is beautiful. Flic loso with an adjustment but hangs on. Hitch kick side somi, another check. Pike jump back tuck is great. 3/2 dismount with a step forward.

STAN – NAVARRO: Double pike, step forward. Much better presented than some of these have been. 3/2 front lay is WAY low, just manages to keep it on her feet. Good double back, with a little hop in place.

ARIZ – COWLES: Front aerial split, a bit off line and absorbs it. Flic loso with feet but so confident. Switch to split, splits questionable. Gainer front full with a hop forward.

STAN – BRYANT: Double layout, step forward. Front thru double pike, back foot really close to the line there… not sure if they’ll call it OOB or not. I love this routine, the quiet moments mixed in are super cool. Open double back, too much power and rebounds a bit.

Season high now out of reach for Arizona after a challenging beam rotation.

They showed a little feature with Ebee talking about her major (biomechanical engineering) – she basically said “well I like biology, mechanical things, and engineering, sooooo.”

ARIZ – MATTSON: Double pike, straight back with a 3/2 front lay. A little overpowered on closing double back but makes it work with a big lunge.

ARIZ – PARKS: Double back, big lunge. Popa to tuck 3/2, that’s unique, I like it! Scoot out of last landing, but good routine.

STAN – PRICE: Nice front aerial, check on 2ft layout. Switch to split is good, great double pike dismount with a step back! Legs split at the end there, might have had to work to get it around.

ARIZ – BELLOWS: Comes in way short on a double back, down and grabs her ankle. Achilles? Poor thing 🙁 Carried off.

STAN – NAVARRO: Flic loso, beautiful. Full turn is great, front aerial lovely. Switch to split with questionable position at the end, double back off line with a big step back.

ARIZ – CINDRIC: She’s the one you want in a tough situation. Great double pike, the performance in this one is phenomenal. Could have stuck the closing double pike. So impressive.

STAN – BRYANT: This rotation is going great for Stanford so far. Full turn, flic loso airy and beautiful. Switch jump is my favorite thing. Weird check on choreo, coers it okay. Flic-flic-double back with a little hop back. Nice one!

Season high for Stanford beam by a huge margin.

ARIZ – SCHNEIDER: Hard to think of her leaving after what she’s done for this rotation. It’s not her last home meet though – Pac-12 championships still to go. Great double pike, front full front lay overpowered but dances out of it! Switch side to Popa is great. This choreo is so wonderful. Fantastic double back landing, and that’s the meet for the Wildcats.

Neither team had the meet of its dreams, with a fall counted on each side and the unfortunate injury to Bellows. That said, that Stanford beam rotation was incredibly promising, and Arizona can take a lot of promise from the tough performance of its upperclassmen and a great vault rotation.