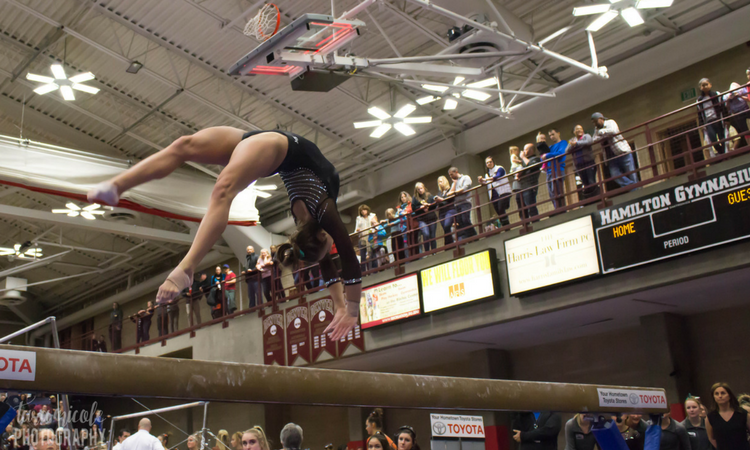 The Denver Pioneers host George Washington and West Virginia in the team’s first Big 12 matchup of the season, and we’re here to cover all of it! The Pioneers look to hit all 4 and break the 197 mark for the first time this season. More importantly, the team wants to hit six for six on bars, an event where falls have illuded them this year. West Virginia has had amazing consistency lately and hopes to continue and improve upon that trend, while the Colonials also look to continue their upward trajectory that has been a theme all season. Especially of note, watch to see how the team uses its freshmen class, which the team has not relied upon as much as some thought to begin the season. We should have ourselves a battle in the all around, with front runners being Maddie Karr and Lynnzee Brown of Denver, Kirah Koshinski of West Virginia, and both Jillian Winstanley and Camille Drouin-Allaire for the Colonials. Don’t count out the Pioneers’ Mia Sundstrom, and as always watch for the dynamic floor routines from the back half of the Pioneers’ lineup as well as the team’s beam anchor, Kaitlyn Schou. Also watch for Zaakira Muhammad for the Mountaineers, who has been another star for the team during her collegiate career.

If you’d like to follow along with us, the meet is being streamed on FloGymnastics for those with a FloPro membership.

Another sellout for Denver!

Tonight's meet is officially SOLD OUT! No more tickets are available!

GW has teal ribbons pinned to their warmups! Love seeing all the support!

For the third straight week, we will start the meet on uneven bars. WVU shows a 48.9 season high on the event. Junior Jaquie Tun has tallied a team-best 9.85 twice!

Take a look at the lineup! ⬇️ pic.twitter.com/0R6t2azgtH

Chesnok VT: nice yfull with a hop in place 9.8

Winstanley FX: missed most of her routine, but looked good from what I could see! 9.75

Gillette UB: markelov! and stuck landing! all I saw from her. 9.675

Schou VT: another great one for the Pios! a small hop in place, if anything. 9.85

Crasa FX: front punch through to double pike good. lil short on combo pass but pulls it around nicely. chest down on double tuck. 9.625

The Pioneers opened strong on vault, seemingly letting the absence of Brown fuel their fire! Both WVU and GW are off to a solid start as well, but definitely look to improve throughout the meet!

Koshinski BB: have missed most of this routine, but dismounts with a 1.5 with a step. 9.625

McLaughlin VT: yfull with a hop but good position 9.7

Sundstrom UB: good opening hs; nice clear hip tkatchev! good on bail to hs; flung her dbl lay and has to take a step back 9.8

Glynn UB: beautiful gienger! she’s cleaned it up so much from her club days. good bail to hs! just a small foot repositioning on the landing. great to have her back on bars again! 9.9

Karr UB: nice gienger directly to bail! loses balance for a sec on squat on but sticks DLO! 9.875

Denver hit six for six on bars! Great for the team. GW also had some nice vaults, highlighted by Drouin-Allaire’s 9.9 yfull! I honestly missed a lot of WVU beam, but they all hit as well, although the highest score was a 9.75.

The Pioneers hit 5, though they’ll definitely want to improve on that performance in the future. GW had a solid bars rotation from what I saw, highlighted by Winstanley! I missed most of floor, but Koshinski was dynamic as usual!

Mermelstein BB: nice leaps; missed most of routine but stuck 1.5 to close

A full hit meet for Denver! Still some things they’d like to improve (see: beam), but they didn’t have to count a fall despite Chesnok’s fall on beam. A small step back from last week score-wise for GW, but still a very nice meet for them! WVU showed consistency yet again, despite a small score decrease, they are still within .1 of  last week’s score. A solid meet all around!