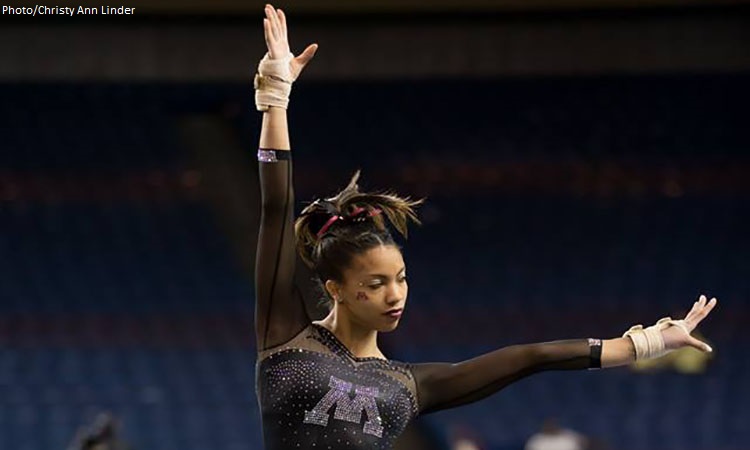 Another Friday night Big Ten matchup is upon us! Minnesota has been rolling through the last few weeks and will have high expectations for this home dual. The Gophers are fresh off of a season high 196.375 at Nebraska last weekend where Lexy Ramler captured her fourth consecutive all around title and Ivy Lu took the bar title with a 9.925. Lu has yet to score below a 9.900 on that event in 2018. The Gophers have been especially impressive on floor, scoring 49.550 and 49.325 in their last two outings. Vault is one question for the Gophers, though as it can be heavy on 9.700s. Last weekend, they opted to vault five, pulling Abby DeMuse—who is battling back from injury—from the sixth spot.

Illinois is still searching for a breakout meet. The Illini are hampered by a vault rotation of all Yurchenko fulls that tend to stay in the 9.7s. Freshman Kasey Meeks has led the team there weekly, often the only vault to hit in the 9.800s. Because vault often scores in the high 48s, the Illini rely on other events to carry their score, which means any mistakes on the other three can be devastating. Last week those mistakes came on beam where the Illini counted two falls, including only the second fall of senior Bridget Hodan’s career. Illinois had an exhibition from Julia Hutcherson on beam and Sarah Lyons on bars as well; both routines were more successful than some in the lineup, so look for them to possibly break into the top six in Minneapolis. If the Illini are going to challenge the Gophers and hit their first 196 of 2018, they need to keep landing mistakes on vault to a minimum and hit the other three error-free.

Ramler is undefeated in the all around this year, and should easily extend that another weekend here, though Illinois’ Rae Balthazor and Nicole Biondi could stay close and keep things interesting.

New leo from Illinois! Very different than what we usually see from them.

If you’ve been with me before for a Big Ten meet on BTN+, you know that technical difficulties and starting late is usually a problem. Tonight seems no different. We’ll see when the feed is up and running!

My media player is just a black screen – this has happened before! Hopefully our friends at Flo will sort it out quickly. Still no video! Seems to down for everyone, not just me. I’ll stick around and see what happens!

#Gophers up on vault to start the night! #LoveTheBattle pic.twitter.com/s6mQhiF1cH

Lindsey Dwyer (Ill.): Since I have no video I’ll get you what I can from twitter and scores for now.

Ciara Gardiner (Minn.): Her first time back in the vault lineup this season!

We have missed seeing @Ciara_Nikki on vault! Her first one of the season goes for a 9.8. pic.twitter.com/U1hdETubs4

Sarah Lyons (Ill.): She’s back! After an exhibition routine this weekend, this is her first lineup routine since rejoining the team for her redshirt season. (Some of these video files seem too big for WordPress to embed!)

Still no video, but I’ll keep collecting tweets and see if we ever get anything. Minnesota will be happy to have Loper upgrade successfully. She’s had that vault in her back pocket since preseason. Overall, that’s a solid start for the Gophers. Illinois counted a fall from Karen Howell (9.2, dropped Rae Balthazor’s 8.175). Without video, hard to say what went so wrong for Balthazor on her strongest event. Good to see Lyons back in that lineup. Long term, she should give the Illini a few tenths boost there, when they hit.

Here comes the bars squad! #Gophers are averaging 48.925 on bars this season. pic.twitter.com/KqjWZDqElT

Bridget Hodan (Ill.): Her second week in a row at 9.8 or better. Illinois needs her to keep that up!

Apologies Minnesota fans, I’m scrounging for videos! You’ll get one when I find one!

Over on bars a 9.2 just came in for Hannah Hitchcock. Minnesota will want to drop that score!

Kasey Meeks (Ill.): As usual, her big FTY pulls in the highest score on vault for the Illini.

Ivy Lu (Minn.): She keeps the 9.9+ streak alive! Hasn’t scored below that mark all year.

Ivy Lu’s bar routine was impeccable. 9.975 was so deserved #ncaagym

We have video! [Realized this was misleading! The feed is still dead. Meant video of the 9.975! Apologies.]

She did what!?! @ivylu98 just completely went out of her mind on bars and ties a school record on bars with a 9.975! pic.twitter.com/yOTHePRafi

A 9.975 has appeared at the Pav. Lovely bars from Ivy Lu! pic.twitter.com/UOkH8gnMvG

Phew Ivy Lu! I’m sure Minneapolis is still screaming. One 9.975 can’t make up for counting three scores in the 9.7s, though, so the Gophers take a moderate event score. They’re still on track for a 196, though, which is the goal, and their best event is yet to come on floor. Illinois will take a 48.9 on vault. That is the weak event for the Illini, and two scores 9.8 or better is a win. They need to be flawless on beam and floor, though, to make up ground. They’re chasing a solid road score more than they are a win here.

Floor is up next #Illini pic.twitter.com/qgiuj1r0zK

Back up a moment while touch is happening, we have a video of Lexy Ramler’s bars. (Thank you Katherine Liu!)

VIDEO HAS PICKED UP! WE HAVE VIDEO. Biondi just finished floor. Traditional live blogging from here on out!

Minnesota had some great performances. It’s the middle of the lineup that hurts the Gophers on beam. Some 9.7s need to start becoming 9.8s before they’ll hit a huge score there. But Ramler’s consistent and gorgeous work continues to stand out. Illinois had some small bobbles to clean up, but overall looked solid. Nadalie Walsh has really changed the look of Illini floor, and the team seems to be settling into the new style well. If Balthatzor can get her huge power under control, she could get a huge score. At this point, a 196 is out of the cards for Illinois, but beam is one of the team’s best events, so the Illini will be looking to minimize mistakes and pull out a high 195.

Floor has been red hot the past two weeks. Let's see if they can close out the exciting evening strong: pic.twitter.com/RoivujknwS

Roe (Ill.): Bhs loso, solid. Beat + straddle 3/4, nice split. Cat leap + gianer loso, no problems. She’s moving quickly with confidence. Grins at the crowd, nice. RO 1.5, fights for the stick, they might give it to her or take a small step. Great leadoff! 9.8

Well, that’s probably not the score either team was hoping for, but there were definite highlights and it wasn’t a bad meet for either team. Both teams show fun creativity. If you want to see some pretty gymnastics, give these two a watch at some point this season. Ramler extends her undefeated AA season another week!

THANK YOU for sticking with me through the early video kerfuffle!