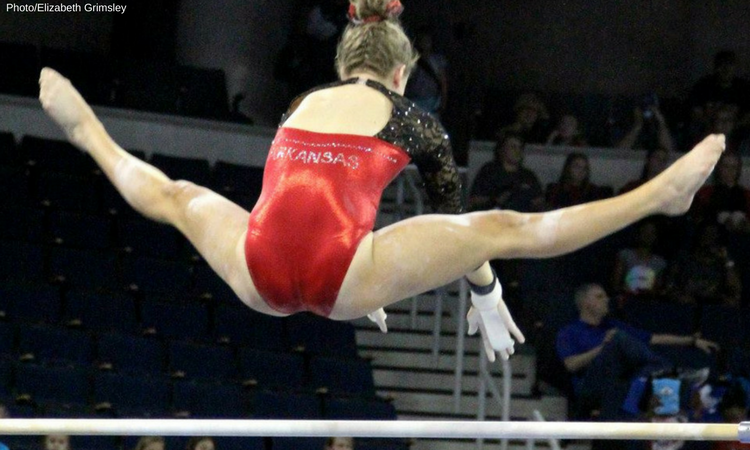 These SEC rivals have both recently scored their first 197s of the season at home, so Arkansas’ home field advantage could be nontrivial. The Razorbacks continue to rely on the all around contributions of Jessica Yamzon and star redshirt freshman Sarah Shaffer, as well as three-eventer Amanda Wellick. Unfortunately, Sydney McGlone seems to be out for the season with an elbow injury.

Auburn doesn’t always choose to compete an all arounder, but tonight the Tigers will put Katie Becker up into all four events. The team lacks no 9.9 potential either way; watch particularly for Abby Milliet on her event. Sam Cerio is sitting out with an emergency appendectomy, though she should be back soon.

Back in the home rotation

#Auburn kicks off the meet on bars! #WarEagle | #BeatArkansas pic.twitter.com/HLPloRUbPu

AUB – BECKER: Too close on Jaeger, catches oddly and pings on the downswing… lands on her upper back, could have been quite bad. Finishes clean enough with a nice double layout.

AUB – WATSON: Good Tkachev off the top! Great handstands, step back on the full out dismount. Good recovery from the fall in the lead off.

AUB – MOSS: Has been so steady so far this season, this routine looks like it’s going right around the 9.8 mark she usually reaches. Love the double layout dismount.

ARK – SPEED: Big FTY, scoot back. Definitely the best of that lineup.

AUB – MILLIET: Way over on a Ray, can’t catch it. Beautiful Pak and handstands though… but counting a fall hurts.

Arkansas is scratching Burton in the sixth spot on vault. Losing McGlone isn’t fun on this apparatus.

AUB – DAY: Toe on to toe 1/2 to Jaeger to overshoot, great work. A little crazy in the air on the double arabian with a hop.

So the story of that rotation is injuries suck. Moving swiftly along…

I really enjoy Auburn bars, though. Handstands and toes are priorities and it shows.

AUB – SMITH: Last minute swap for Becker, who’s been pulled. Wonder if that fall off bars was worse than it looked. Block is way back on the table and it shows in the amplitude.

ARK – YAMZON: Pushing for handstands, a bit low on tkachev. Close to the bar on FTDLO but good with a little hop back.

AUB – PHILLIPS: Good amplitude on FTY with a side step.

ARK – SHAFFER: Maloney to bail is fab, full turn to double back with a kick out and stick. Lovely routine!

AUB – KRIPPNER: Dropped chest a tiny bit to fight for a stick and she holds it!! Didn’t look like a very powerful block but her amplitude was fine.

ARK – LAIRD: Great Ray, toe on to bail. Double layout dismount is maybe a bit close to the bar? with a hop back.

ARK – WELLICK: True Shaposhnikova, I love that skill so much, direct to great bail. Blind change to double front with a baby step back. Great routine!

AUB – DAY: Nice 3/2 in the air, underrotated though, has to step back quickly to hang on. Could have sat that.

ARK – SPEED: Toe 1/2 to Jaeger, not the most amplitude. Toe on to bail is great, toe full to double back stuck!

AUB – GLENN: 3/2 and what in the world? Totally lost on the landing, twisting onto the ground and goes sprawling forward. Such a pity but at least she looks okay.

Arkansas on a bit of a hot streak there! Really solid rotation. Some were 9.9ier than others but that’s life.

AUB – SMITH: Double pike, good. Switch side to Popa, 3/2 front lay to Shushunova awesome! Super fun choreo on this one. Deep on double tuck but makes it work.

AUB – GLENN: Scoots back out of double pike, missed the rest of this because my mom called me, no joke. Real life hits hard y’all. (Hi mom <3)

ARK – SHAFFER: Switch to straddle 1/4, off on her acro series.Cat leap to side aerial, tuck 3/2 with a hop forward

AUB – SLAPPEY: Front lay to Rudi, a little underrotated on double back but not a big deal.

AUB – DAY: Great energy on this one, double arabian and if she moved more than an inch she’d have gone out of bounds but she held on. Great combo pass in the middle, and then stumbles out on the double back. Bummer!

ARK – BURTON: Front aerial to beat jump, flic loso is beautiful and gets a huge smile from her! Split to sheep. Gainer loso, stuck. That was the best of the lineup by my eye.

AUB – MILLIET: Lovely bit of choreo on the floor off the top. Front lay to Rudi is fabulous. Great switch ring to switch 1/2, double pike seemed slow in the air but she made it fine. 3/2 front lay, that was a great routine!

Both teams had some great scores in that rotation, both had to count a score or two they didn’t really want. This is already in drop score territory for Auburn, so I’m interested if the Tigers take any risks on beam. For Arkansas, a solid RQS-able high 196 would be very valuable.

AUB – RIDDLE: Flic loso, not great feel on the beam there but worked it out. Ooooh lovely slide down to side split! Switch to straddle 1/2. Cat leap to side aerial to tuck full dismount, good one!

ARK – BARGIACCHI: Ooh this is some intense choreography off the top. A big knee brace too… always makes me a bit nervous. Nice Rudi in combo. Switch side to Popa to drop, 3/2 front lay. Finishes with a back spin, so fun!

AUB – WATSON: Filling in for Becker, hasn’t competed in a few weeks. Flic loso with a bit of knees, cat leap to side aerial to beat good. Switch to straddle 1/4, off angle on round off and massively mistimed 3/2 dismount, rebounds sideways. Not a fun fall, but she looks okay.

ARK – GARNER: Double pike, bit of a rebound back, fights to keep it under control. This routine is so dynamic and she is so powerful.

Aww, coaches talking about how Courtney McCool-Griffeth gave them the best choreography that the team’s ever had.

ARK – YAMZON: Airy double back, textbook controlled step. Great double pike too, Burton killing the choreo on the sidelines. Front lay front full is great, well done! After falls from Watson and Shaffer, that will most likely be the all around title for her.

AUB – SLAPPEY: Full turn, flic loso with a check. Switch 1/2 with a little check to a beat jump. Cat leap to side aerial to back full, secure stick.

Yeah that didn’t have a leap series.

ARK – BURTON: Two double backs I think? Little hop on the first one but no step, great. She’s so much fun to watch perform. Front full front lay is great.

ARK – SHAFFER: Great opening double pike, a little too much energy out of the double back. Tour jete 1/2 to Popa is stunning. Front full to front lay so lovely. That was a really good one.

ARK – CARTER: This is one of those floor musics that everyone uses… Hailey Burleson had it last year and now it’s SPREADING. Deep on double back, stick on double pike. 3/2 front lay is great, fun choreo.

Not every 9.9 Arkansas has scored in the last two home meets has been completely legitimate, but enough of them have been that no one would want to be on the other side of the arena on the day that the Gymbacks put everything together – the potential shown in these one-off massive rotations is immense. The quality of performance on floor is great this year, too – it sounds like that’s Courtney McCool-Griffeth’s influence, and I’m a fan.

We didn’t learn much new about Auburn tonight. The Tigers are immensely talented but streaky, but they’ve had enough good postseason results in recent years that we should know better than to panic about a random midseason 194. Abby Milliet is getting better and better, and getting Sam Cerio back in a few weeks will help too. The only concern for the Tigers is the slight depth crunch if Katie Becker’s bars crash turns out to be a real injury; best wishes for her, that didn’t look like much fun. That aside, though, the Tigers head to a TWU quad next weekend as the heavy favorite and I expect most of tonight’s struggles to have passed by then.