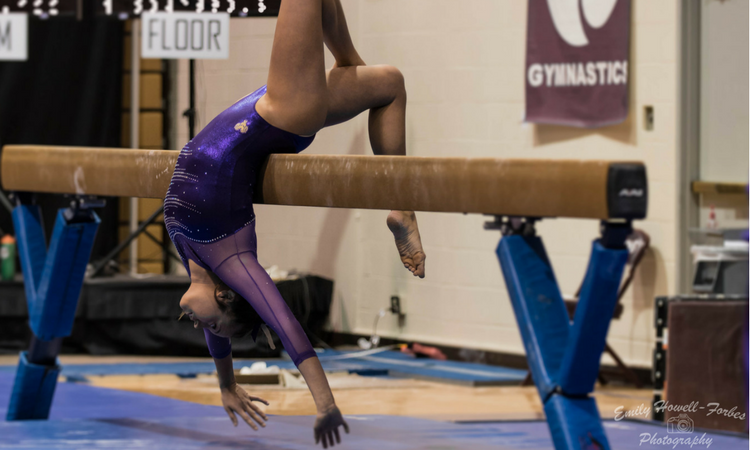 West Chester lost 11 postseason routines from last year. including two star all arounders. So the Golden Rams will be searching for stability in their 2018 lineups. That said, they do return a few star specialists and add an exceptional freshman class that will help recoup their losses and continue improving.

Senior specialist Meghan Chan provided irreplaceable weekly scores on vault and beam last season. Junior Cassie Hageman is becoming a star on her two events as well. Yolanda Nodarse has made a number of “top freshmen” lists with her incredible J.O. scores on three events and should be an immediate star. Jessica Meakim and Melanie Wojewoda are also strong over multiple events and could be extremely valuable.

Vault is the event where the Golden Rams will be hardest pressed to fill a lineup; all four seniors from 2017 were frequent contributors. Rachel Blair provides the highest returning score. She and returning weekly competitor Chan will likely form the core of this lineup. Lindsey Mathis’ difficult Yurchenko tuck full could join them, and Rose Wortman provides another option.

However, the team will need to utilize new options to fill the lineup, so it might look to their rather under-utilized sophomore class to fill the gaps. Based on J.O. scores, the best vault prospects are Natalie Onderko and Sydne Powers. Of the freshman, Meakim is likely to become an immediate star. Her stickable Yurchenko half scored up to 9.55 in level 10 and could become an immediate late lineup prospect. Wojewoda and Alaina Steinberg also scored well in level 10 and will be immediate lineup hopefuls, though the other two freshmen—Nodarse and Kelley Lubking—were equally consistent and could become options with a little cleaning.

Bars is by far the Golden Rams’ deepest event this year, having lost only two postseason routines. Myranda Marshall, Lindsey Mathis, Isabella D’Orazio and Jordan Miranda all return as weekly competitors, and Chan is less consistent, but with a season high of 9.75, she is always an option. Onderko and Powers also competed occasionally in 2017.

The freshman class is also strong on bars. Wojewoda was a J.O. star, scoring up to 9.55 for a routine featuring a beautiful pike Jaeger to overshoot combination. She should fit into the back end of the top six immediately. Meakim and Nodarse have also scored up to 9.425 for routines that are on the difficult side of WCU’s standard. Combined with the depth from the upperclassmen, these three should help transform bars into a strength for the Golden Rams.

WCU is a beam team. It ranked No. 50 last year with an RQS of 48.615, compared to its team ranking of No. 61! Three postseason routines graduated, but the Golden Rams retain more than sufficient depth to continue being competitive in 2018. Chan and Wortman will likely return to their weekly spots, joined by sophomore specialist Sarah Boyd, who scored as high as 9.85 (!) last year. Hageman will likely find a spot in this group as well, with scores up to 9.8, and Blair and Emily Loughery provide other options.

The freshmen aren’t as strong a beam group as on other events, with one notable exception. Nodarse was astoundingly good in level 10, topping out at an incredible 9.7 and never scoring below 9.4 in 2017. Just for this routine, Nodarse is arguably the highest profile DII freshman and could become an immediate star. Miranda didn’t compete beam last year but also scored well in J.O. and could become an option.

Floor is typically the Golden Rams’ highest scoring event, and while they do have some recovery to do from senior losses, they should have more than sufficient material to continue scoring well. Senior Madison Brent is a floor specialist, and with scores up to 9.85, she could anchor this year. Hageman and Loughery will also likely return to their spots in the top six, and Mathis and Wortman provide other options.

Once again, Miranda scored well on this event in level 10 and could see lineup time this year. That said, floor is another strong event for the freshmen, so they might dominate the action. Meakim and Nodarse are standouts with top scores of 9.525 and 9.575, respectively. Lubking has scored as high as 9.325, and Wojewoda’s scores are a little lower yet extremely consistent.

Though the Golden Rams lost several critical contributors, they shouldn’t be hurting for depth and, in some cases, might be gaining higher scoring replacements. While vault might present a challenge early in the season, the other three events should be secure enough to help continue their upward rise in 2018.