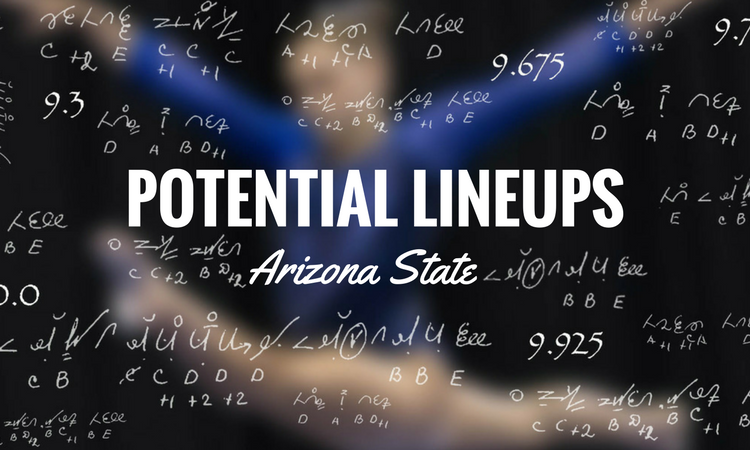 Our final Big Four conference team we’re analyzing is Arizona State, who saw an upward tick last season after the arrival of new coaching team Jay and Jess Santos. After losing two event specialists, the holes are few and the progress is huge. A solid incoming class and exceptionally strong transfers should bolster the team’s regionals bid, but everyone will have to stay healthy to keep the team in contention.

Vault was not ASU’s strong suit last season, finishing the year ranked No. 49. Some of the newcomers should be able to improve those numbers, with Cairo-Leonard Baker most likely bringing a Yurchenko one and a half to the table. She’s shown both that and the full in training videos, but it’s likely she’ll stick with the 10.0 start value and anchor the lineup. Anne Kuhm, a French elite transfer who comes to ASU as a junior, brings a solid full, as does Kaitlyn Szafranski, the junior transfer from LSU. Molly McNamara, another incoming freshman, has had her clean Yurchenko full featured in training videos, so though it’s not quite top-six worthy, she may make alternate.

While many of the returning Sun Devils struggled on vault last season, it’s important to note that many have been making strides in preseason training that will almost certainly lead to better scores. Morgan Wilson remains the team’s strongest veteran with her full, multiple 9.8+ scores and nothing below 9.7. Jessica Ginn will also be an important contributor, having scored 9.8 or higher in her final four weeks of the 2017 season and never falling on her full-twisting Yurchenko. Morgan Hart didn’t have inspiring scores last year, but her training in preseason (she’s second in this video) is encouraging, as was her performance in Arizona State’s most recent intrasquad. If she can keep vaulting like that, she’ll have no trouble getting good scores, much less making the lineup. Katelyn Lentz was a regular contributor last season, with a few scores crossing the 9.8 mark, but she’s been less visible in training updates and competed as the alternate in the intrasquad last week. Finally, Corinne Belkoff was a frequent vaulter in 2017, but she had wildly inconsistent scores and only 9.75 as a season high. With all the new talent and improvements being made, she too may be bumped to alternate. Take a look below at what we think will be ASU’s best lineup in 2018.

Coming in at No. 43, bars was the second-best event for the Sun Devils in 2017. Based on the strength of the newcomers, that rankings should only get better this season, as both Kuhm and Leonard-Baker count bars among their best pieces. Kuhm’s perfectly pointed toes and natural swing make her just as much an aesthetician as a technician, a combination that could lead to huge scores for Arizona State. Leonard-Baker has a wide and difficult vocabulary of releases, including a piked toe shoot from low to high and an aggressive swing that gives her a competitive edge. Kaitlyn Szafranski exhibitioned on bars at LSU, so don’t be surprised to see her serve in at least an alternate capacity for her new team.

Senior Nichelle Christopherson will be expected to lead the veterans, as bars is her strongest event with her career high sitting at 9.875. Ashley Szafranski has also hit the 9.875 mark, but her consistency wasn’t the greatest. It’s likely she’ll still earn a late lineup spot, but she’ll want to watch her for her teammates nipping on her heels. Wilson, too, was a high scorer with inconsistency, but she will also be a key part of this lineup with her 9.85 scoring capability. Hart, meanwhile, is one of the only Sun Devils without a fall last season, so she may be the best option to lead off. Graycee Rushton was a bars regular in 2017, but she’s been notably absent from training updates, as well as the recent intrasquad. She’ll likely serve as an alternate and be relied on less this year. Ginn has also been seen training bars with solid success, so she may be an alternate choice as well. Here’s how we’d suggest ASU set its top six this year.

Beam was Arizona State’s best event by far last season, ranking 29th in the regular season—a position that would easily put them in the regionals field if replicated on the other three events. Leonard-Baker will fit right into the unique, creative theme of the Sun Devils’ beam work, though she isn’t the most aggressive or consistent on the apparatus. Kuhm’s beam is much like her bars: detail-oriented, elegant and graceful. She actually may end up taking the anchor spot for her excellent work, though the recent intrasquad didn’t have her quite that late. Kaitlyn Szafranski used to have a killer set, so if she can bring that to ASU, she could at least find herself in an alternate slot.

The veterans don’t make beam an easy lineup to break into, though. Topping the list are upperclassmen Christopherson and Justine Callis, both of whom broke 9.8 last season. Callis has reportedly taken a big leadership role on the beam team, so while her consistency isn’t the best, she may become the go-to for the lead-off position. Christopherson hit 9.9s in the past, so it’s likely she’ll land somewhere late lineup. Lentz and Ashley Szafranski are both strong scorers for the Sun Devils, with highs of 9.875, so they’ll likely return as well. Heather Udowitch was a beam regular in 2017, but her consistency was nonexistent. And Belkoff, though her scores in 2017 weren’t great, is the only other Sun Devil we’ve seen train beam this fall. She’s not a top choice but still seems likely to serve as an alternate. Find the rest of our proposed beam squad for ASU below.

Floor was the team’s worst event in 2017, finishing the season ranked No. 54. The newcomers may be the solution to that issue, with Kuhm and Leonard-Baker the top choices to close the rotation. Both have different styles, with Kuhm focusing on lyrical artistry and execution and Leonard-Baker showcasing her power and crowd-pleasing choreography. Kaitlyn Szafranski also competed floor at that intrasquad with encouraging results, though she is largely untested on in a college setting. Still, showing in the top six at the public showcase is a good sign.

As far as the veterans go, our favorite to kick off the lineup is Lentz. Though she wasn’t very consistent, her final six weeks were all 9.8 or higher. Hart might be a good early lineup option, as she’s making improvements in preseason training and had a couple decent scores last season while Christopherson will likely compete later in the lineup, with most of her scores 9.7 or higher last season despite a few falls. Belkoff was a frequent contributor, with a score ceiling of 9.85, but she hasn’t been seen training floor much and wasn’t featured in the intrasquad at all. She’d be a favorite for a late lineup slot if she materializes. Callis had a few good performances last season and no falls but was an infrequent performer and hasn’t been seen on floor in preseason. On the other hand, Ginn didn’t have great scores last season but had a strong showing in the intrasquad, so she too is a bit of a mystery. Take a look below to see where in the lineup we’d place her, as well as how we’d line everyone else up on the event.

Last season, both Lentz and Christopherson competed in the all around, but neither were incredibly successful. This year we expect the newcomers to have a shot at competing all four, with Kuhm and Leonard-Baker the likeliest choices. Leonard-Baker has a balanced set across all events that should serve ASU well, and Kuhm competed all four for France at the Olympic Test Event in Rio and was an alternate for the all around final in London. She’s a shoo-in for all four in NCAA and should be quite the asset for the SUn Devils.

Overall, Arizona State’s incoming contributors should make a huge difference for the team, making the push for regionals all the more likely. With the returning gymnasts making strides in consistency and execution, we fully expect ASU to be the Cinderella story of the season, though far how it will rise remains to be seen.