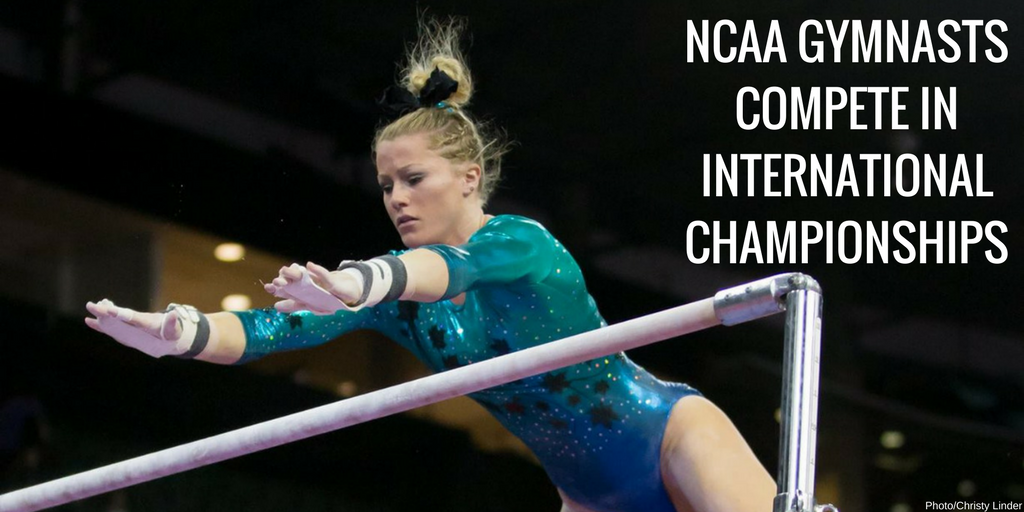 While the NCAA and J.O. seasons are over, the elite season is just beginning, meaning those top-level gymnasts transitioning from the international world to college can have one last hoorah before hanging up their country’s leotard. Many present and future NCAA gymnasts have competed outside of the US in the last two weeks. However, the highest-profile NCAA showing was from a graduate. Georgia alumna Brittany Rogers competed at the Canadian Championships, showing three events and winning the uneven bars. In finals, she showed a somewhat downgraded routine that included a missed connection on the low bar and only a D dismount (a change that was made after she didn’t land her full-twisting double layout in qualifying). She also had a big break on a pirouette, resulting in a low-for-her score of 13.634. However, her difficulty score was 5.9 with a few more tenths still to add back in, making her a good option to make Canada’s World Championships team when the time comes.

Current Central Michigan standout Denelle Pedrick also returned to Canada to compete in the Level 10 competition. She won both qualifying and finals securely, showing her beautiful double-twisting Yurchenko to score 9.716 and reaching an all around total of 37.698 in finals. (It’s worth noting that the Canadian J.O. scoring system is tighter than the American equivalent, making this a great score.)

Incoming Ohio State freshman Victoria-Kayen Woo entered the competition as well but elected not to compete. Several other incoming freshmen from Canada, including Sydney Townsend of Michigan and Sydney Soloski of Utah, chose not to enter.

However, we did see a few other NCAA prospects. Madeline McLellan of the Washington 2019 cohort had falls on bars and beam but was successful on floor and vault. Her difficulty scores are on the lower side as she’s a recent elite qualifier, but she shouldn’t have a problem moving back to the Level 10 format of NCAA. Alana Fischer, a SEMO commit for the upcoming year, scored 35.382 in the Level 10 finals.

In other elite news, UCLA commit Pauline Tratz (2018 season) competed two events in the first Bundesliga meet of the year last weekend. She showed a beautifully open full-twisting Yurchenko on vault, though she has competed a 1.5 in the past—something UCLA will be hoping to regain this season. Her floor routine opened with a high full-in that will be a huge asset as well. With three tumbling passes that she’s fighting to stick (she ran out of energy on her closing double back and put her hands down) and an array of difficult dance skills, this routine should convert well to NCAA.

Finally, Oklahoma commit Kaitlin Deguzman (2020) traveled to Bangkok to compete in the Asian Championships. Deguzman has competed as an American elite in the past, including at nationals in 2016. She also holds Philippines citizenship and represented the country in this competition. She competed as a level 10 in the U.S. this year—and only missed nationals due to a beam fall at regionals—and her score of 45.6 likely means that she competed her J.O. routines rather than upgrading for this elite-level competition. The national team of the Philippines has a long history of creating successful international competitors out of mid-tier Filipino-American gymnasts, and many of these girls go on to be quite successful in NCAA. Oklahoma fans should be looking out for this talented all around gymnast in 2020.