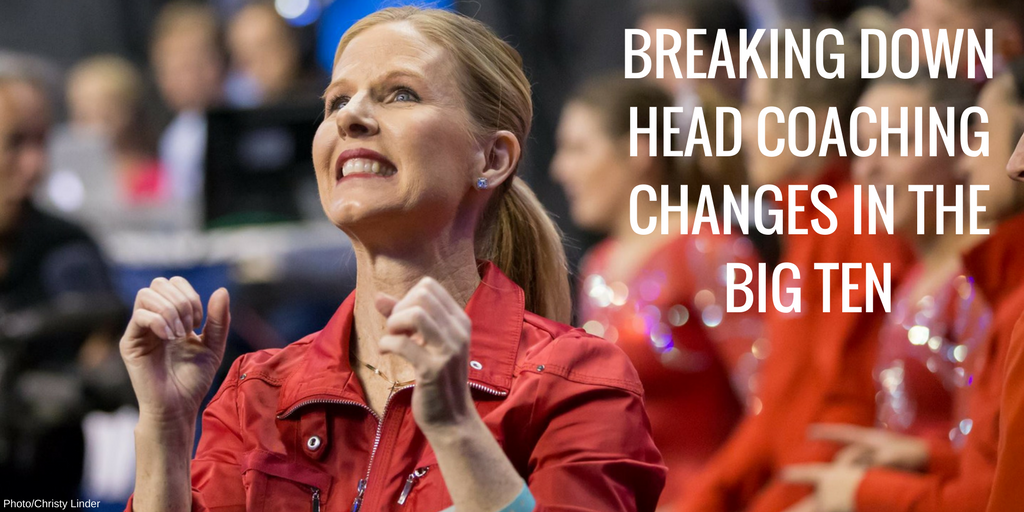 ​The annual offseason coaching shuffle has been extreme this year, with nine vacancies or recent changes to date. The Big Ten has been the hardest hit conference, boasting four of those nine changes: Penn State, Michigan State, Ohio State and Illinois are all in the mix. With so many changes, it can be tough to keep track of who’s going where and which teams still have holes to fill. Let us break it down for you.

The embattled Thompsons have been in the headlines all season. Rachelle left the team in June 2016 after accusations of body shaming and abusive coaching practices surfaced. Jeff was fired mid-season—on Feb. 23rd—for running a toxic program. Athletes at both Penn State and Auburn, where the Thompsons previously coached, spoke out against the couple’s abusive coaching, and assistant coach Samantha Brown (not to be confused with Sarah Brown) left the team mid-season in protest of the Thompsons’ cruel tactics. The team began performing notably more consistently after Jeff’s firing, with no single event score below a 48.5 while it previously had at least one event below that mark each week.

Brown comes to Penn State after one year as ​head coach at Eastern Michigan and several years as an assistant at Michigan and SEMO. She led EMU to one of its best seasons in recent years, with notable strengths on bars. Watch the Nittany Lions to see if they can continue their trend of consistency from the last half of the 2017 season.

Michigan State has also been plagued by scandal this year, sitting at the heart of the Larry Nassar case. Longtime head coach Kathie Klages supported Nassar after accusations of sexual assault came out against him and reportedly had her team write the discredited doctor letters of support. Klages came especially under fire when it became known that a current MSU gymnast would joining the lawsuit against Nassar, and that Klages had encouraged the gymnast’s parent not to report the abuse. Klages retired on Feb. 14, one day after being suspended. The latter half of the season went well for the Spartans, especially on floor where they tied a program-best 49.475 at the Big Ten Conference Championships. The team made 17 regional appearances under Klages.

MSU has not yet named a new head coach, nor has it publicly announced a national search for a replacement. As of right now, Mike Rowe, Klages’ assistant coach, is listed as the interim head coach. It would make sense for MSU to keep Rowe in the interim position for the coming year while the program handles the fallout of the Nassar scandal. It is unlikely that the team is an appealing program for coaches looking to make a move at the moment, so waiting a year to bring someone on could presumably work in its favor in the long run.

Ohio State announced on May 8 that Carey Fagan would assume the role of Assistant Athletics Director for Administration and Athlete Well-Being, effective immediately. Fagan led OSU for 13 years, bringing the Buckeyes to the national championships in 2012—the first time in 23 years—where they finished 10th. There have been rumblings of discontent with Fagan’s practices, as well as accusations of athlete mistreatment, though they are speculative and not as public as the accusations against the Thompsons or Klages. The Buckeyes finished the 2017 season ranked 24th and sent junior Alexis Mattern to NCAAs. The team finished fifth at the competitive Champaign regional.

Meredith Paulicivic has been an assistant at Utah for the past two seasons. Previously, she was the assistant coach at Arizona and spent almost 20 years as a J.O. coach. Paulicivic was responsible for Utah’s choreography, something that made the Red Rocks stand out amongst the top teams the past two seasons. She also coached vault at Utah, an event in which she excelled in her own NCAA career.

Kim Landrus’ departure from Illinois is somewhat obscured. N.C. State announced she would be the team’s new head coach before Illinois announced she was leaving, so there was never an official statement from Illinois on the situation beyond wishing her best in her new position. Landrus was the Illinois head coach for 7 years in which the Illini qualified to regionals each of those seasons and made national championship appearances in 2011, 2012 and 2013, finishing 11th each time. The Illini were also second at the Big Ten championships in both 2015 and 2017. Despite these successes, the team has tended to underperform. It is relatively weak on vault, with no 10.0 start values in 2017, and lacks some of the overall precision, recruiting and consistency needed to be a top-tier program.

Illinois has yet to name a head coach. Because this program has been on the cusp of breaking into the top 10 (though the past two seasons have been rockier), the opening provides an opportunity for someone to grow the team into a serious contender to consistently qualify for nationals. Illinois could strengthen its recruiting, especially considering that some of the nation’s top gyms are in the state in Legacy Elite, IGI and Prestige. It seems likely that Illinois would be courting someone like Danna Durante, though whether Durante would move to a program that is less hyped (and little funded) by its school is yet to be seen. Illinois could also present an opportunity for a star DII or assistant coach to step into a bigger role.