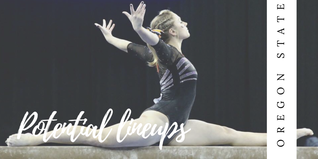 Today we focus on the steadily rising Oregon State Beavers, who will lose key seniors Risa Perez and Jamie Radermacher. It’s unclear whether or not OSU will also lose Erika Aufiero, who suffered a severe injury before the start of last season and decided to redshirt, potentially leaving her one more season of eligibility. Regardless of this, though, the Beavers gain a huge freshman class this year. Eight gymnasts will join the roster for the coming season, including two international elites. With such a deep pool of talent to draw from, OSU should have no problem filling its lineups with solid routines this season.

On vault last season, Oregon State fielded two vaults with a 10.0 start value that are likely to be back this season. Mary Jacobsen will return her Tsuk, and Dani Dessaints should bring back her Yurchenko 1.5, provided she’s back to full strength after an injury early last season. Many returning gymnasts contributed solid Yurchenko fulls to fill out the rest of the lineup last season, including Maddie Gardiner, Megan Jimenez, Shireen Khamedoost, Taylor Ricci and McKenna Singley. However, the

handspring pike half before discovering a stress fracture in her shin. With these four, Oregon State now has the same potential as California to become the first team to field a full lineup of six 10.0 vaults since the devaluation of the Yurchenko full. The meet between these two teams this season should be a close one.

Bars was a deep event for the Beavers last season, seeing eight different gymnasts in the lineup during the season. However, it will only get deeper this season, as many of the incoming freshmen consider bars to be their best event. Gardiner, Jacobsen, Khamedoost, Dessaints and Mariana and Silvia Colussi-Pelaez should all be back with their excellent routines this season. The team’s bars star last season, though, was Kaytianna McMillan, who ended the regular season ranked seventh in the country on bars. After fighting through several injuries, she posted five scores of 9.9 or higher last season and will hope to repeat that kind of performance this year. Freshmen Jaime Law, Alyssa Minyard and Hallie Briscoe will be gunning for spots as well, with Briscoe the most likely to break into the lineup. With the impeccable form of a WOGA alum, she competes both a Tkachev and a Jaeger in the same routine, significantly raising her level of difficulty. If she can upgrade her dismount, she could be a real threat on bars this year.

The Beavers may start to feel the loss of Perez on beam, where their depth will suffer somewhat. Gardiner, Jimenez, McMillan and the Colussi-Peleaz sisters will all return solid beam routines, but fewer freshmen have the strength in this event to pick up the slack left by Perez. Briscoe will be the most likely choice, with a creative handstand mount directly into her back handspring-layout stepout series and a wide variety of dance elements. Maela Lazaro, another freshman, may also be able to contribute with a strong switch leap to straddle three quarters combination and very elegant choreography.

The biggest lost to OSU will be on floor, where both Perez and Radermacher contributed. Gardiner, McMillan, Ricci and Singley will return their routines that all scored 9.8 or higher at some point last

another a 2.5 twist. Lowery would bring the Beavers their only E pass of the season with a punch double front to open her routine. McCant and Greene may also be in the fight for the floor lineup. But if not, they’ll be able to provide some solid fallback routines for depth.

Barring disaster, Gardiner will certainly return to the all around competition this year, especially after placing in the top 20 at the end of the regular 2016 season. If McMillan is able, it’s also possible she’ll return to the all around, as she competed all four events toward the end of her sophomore season. Her weakness will be vault, especially with all the new 10.0 start value vaults to compete with. Most of the other Beavers will stick to two events for the time being, though don’t be surprised to see Singley step up should someone get hurt. She competed all four events over the course of last season, just never all at once.

Tomorrow we’ll check out the dynamic Stanford Cardinal and what surprises it may bring this season! For more on potential lineups in the coming season, check out our page here, our SEC series or the previous posts in our Pac-12 series: