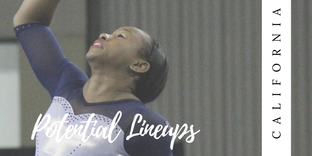 After a stellar performance last season that took them all the way to Nationals, the California Golden Bears will be hungry for more in the 2017 season. The loss of their senior class shouldn’t hurt much, as Kristina Heymann did not compete last season and Serena Leong suffered yet another injury and has since medically retired. The Bears learned to do without and rallied under the leadership of Toni-Ann Williams, who will return to her team fresh off a trip to the Olympics. With a class of incoming freshmen that seem to fit the creative Cal mold, the coming season should look to be a strong one.

Last season, California was one of the only teams in the nation to really mix it up on vault after the devaluation of the full-twisting Yurchenko. At one point in the season, five of six gymnasts in the lineup were competing 10.0 start value vaults. The coming season should be no different. Though veterans Desiree Palomares, Charlie Owens and Amber Takara will return useable full-twisting Yurchenkos, Cal will also see most of its 10.0 vaults return. Emily Richardson will bring back her
on with a front tuck half off. Rachael Mastrangelo and Mariah Peterson also have both competed both Yurchenko fulls and 1.5s and Peterson is training a double onto mats in the pit. If both Mastrangelo and Peterson do at least the 1.5, Cal will be able to field an entire lineup of 10.0 vaults, making it the first team to do so since the Yurchenko full was devalued.

Bars could be considered Cal’s weakest event last season, but this season it should have an easier time of it. The Bears will see the return of all their lineup contributors from last year, including Gallarzo, Owens, Richardson, Takara, Williams, Jessica Howe, Sofie Seilnacht and Yuleen Sternberg. The difficulty was there and their landings were usually decent, but many of them had issues with consistency. All but one of them had at least one fall in 2016. In terms of newcomers, Dudschus and Cassidy Keelen will bring the cleanest new bar routines, with Keelen’s the better of the two.

does Zoe Draghi’s sheep jump. Desiree Palomares takes a daring approach to a routine element — her full turn is in an attitude position, which is always risky. Even the newcomers are no exception. Keelen’s split jump to split half combination is certainly unique, and Peterson’s routine contains five different acro elements, using all three possible directions.

Statistically, floor was Cal’s best event last season, and there’s no reason that trend shouldn’t continue into 2017. Robinson and Williams both have E passes — a double arabian and double layout, respectively — but Williams actually has the potential for two E passes. She actually competed a full-in instead of a double pike for her final pass a couple of times in 2016, but that was mostly to prepare for the Rio Games this summer. The Bears will also see the return of Howe, Owens, Palomares and dance powerhouse Draghi. Of the newcomers, Peterson will have the best shot at joining the floor lineup with clean twisting form throughout her routine that ends with a 2.5.

The obvious choice for Cal’s all arounder is Williams, considering her international experience and well-balanced repertoire, but there are certainly a few other contenders. Owens competed all four apparatus over the course of last season, though never all in one week. As a sophomore, she may now have the experience necessary to take that next step. However, with the variety in vaults increasing, her Yurchenko full may be left out and prevent her from doing all four. Rising senior Howe will almost certainly compete bars, beam and floor, but did not compete vault last season. As a freshman, however, she competed all four pieces. If she were to bring back a solid vault, it’s possible she could get an opportunity for the all around. Keelen, too, could have a shot at the all around, though she’ll run into the same vault problem as Owens, as she only competes the full. She’ll also have some very solid floor competitors to push past if she wants to break into that lineup.

Come back tomorrow for the next installment where we’ll take a look at the Oregon State Beavers! For more on potential lineups, check out our page here, our SEC analysis series, or previous posts in our Pac-12 series: