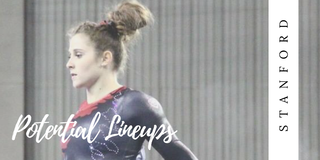 Today we focus on the Stanford Cardinal, who loses a stellar senior class. Melissa Chuang, Jenna Frowein, Ivana Hong and Taylor Rice will leave major holes in all four lineups, but with the addition of some strong freshmen, the team shouldn’t suffer much.

Like many NCAA teams, Stanford used mostly full-twisting Yurchenkos in its lineups last season. The only gymnasts returning from that group in 2017 will be Taryn Fitzgerald and Dani and Nikki McNair. In addition, Elizabeth Price often performed a Yurchenko double, but she had the only 10.0 start value vault on the team in 2016. This leaves only four vaults for the lineup, but the incoming Cardinal should be able to fill in the blanks. Kaylee Cole, Texas Dreams alum and Bolivian elite, has competed both the Yurchenko full and double full in competition. She’s actually scored a 9.9 with the double in the past, so if she can consistently keep that kind of form, she may be successful competing it for Stanford. In addition, both California local Ashley Tai and Canadian elite Aleeza Yu both have excellent Yurchenko fulls to contribute. Yu, however, may not be up to full strength at the beginning of the season, as she got injured during the Elite Canada meet earlier this year.

Consistency was a major problem for Stanford on bars last season. Returning to the lineup this season should be both McNairs, Price and Dare Maxwell, and each of them fell at least once last season. Finding a groove on this event will be key to the team’s success, both for those veterans and the

the team. The Cardinal will have enough gymnasts to field a lineup, but with the consistency problem, it starts to become a question — which of them can actually stay on the apparatus?

​Stanford won’t have a lot of wiggle room on the balance beam this season. Only four lineup regulars will return: Fitzgerald, Price, Nikki McNair and Rachel Daum. The freshmen should be able to pick up

to great use on beam with four different elements to show off her 180-degree split position, including a nice switch ring leap, which are less common in the NCAA.

Floor, too, will see four routines from veterans and two of three possible newcomer routines. Daum, Fitzgerald, Price and floor specialist Haley Spector will all return to the lineup, with Price and Spector bringing E passes to the table. Cole, Tai and Yu all have very useable routines, with Cole’s likely the most solid and Tai’s the most innovative, with a fun round-off layout half to layout full combination for her first pass. Yu may not be able to do floor by the start of the season after her injury at Elite Canada. But once she is back to full strength, her tumbling and musicality will be a great asset to the Cardinal.

In the all around, there’s no question that Price will compete all four pieces nearly every meet. She’s their strongest and most experienced gymnast overall, so expect to see her take the lead this season. With at least two lineup spots left open by graduating seniors, it’s also possible for one of the new freshmen to step into an all around spot. Veterans, too, can take advantage of those slots. If Nikki McNair can put together a strong floor routine, she may very well be able to compete all four pieces. Similarly, if Fitzgerald can put together a consistent, clean bar routine, she could jump her into an all around spot. Also, don’t be surprised to see either Nicole or Hailee Hoffman step into a handful of lineups this season. With so many gaps to fill, and Yu possibly not up to full strength at start of season, the Cardinal may need them to step up.

The next two days will focus on the lineups of high-profile Pac-12 rivals UCLA and Utah, so don’t miss it! For more about potential lineups, check out our potential lineups page here, the SEC series, or previous posts in this Pac-12 series: