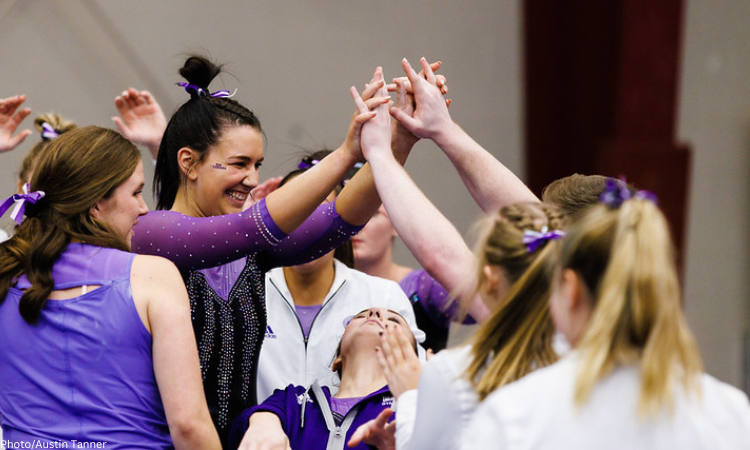 Week 3 marked getting into the thick of conference competition for most teams. Although beam tried to become a nemesis, teams showed grit by closing out their meets in style, including Ithaca College, where the Bombers set a new individual records thanks to Cameryn Nichols. The west continues to dominate, but the east is putting on the pressure, especially Brockport, Ithaca and Springfield. Did we mention that Stout went to North Carolina and broke its all time team record? Week 3 was kind of a big deal.

In just her second vault as a Titan, Daejah Rose came up with an impressive stuck Yurchenko full that made the crowd go crazy. UW-Oshkosh must be working on stick drills in practice because this team is on a roll, with Reanna McGibboney sticking last week and Mia Lucero doing the same in Week 1.

It’s not every day that an athlete can catch a release with one hand and continue with the previously scheduled programming without counting a fall. Two claps for Ayako Maeda’s grip strength and perseverance this week.

Floor Party Footage of the Week

UW-Oshkosh had a livestream for its first home meet of the season. The camera angle really had viewers feeling like they were at the meet, a part of the crowd, adding to the overall excitement of the final rotation. Fans had the perfect view of the celebration tunnel after every routine—just maybe not the routine itself.

Why Should You (Re)Watch? Heading into this meet, it was a battle between the first-, second-, and fourth-ranked teams in the east. The Bombers continue to apply heavy pressure to the dominant Golden Eagles for their second match up in as many weekends. Brockport may have claimed the event titles on vault, bars, and floor, but Ithaca took the top four spots on beam, cementing its place as a beam team this season, with nearly a point higher average than all the other teams in 2023. Why you should really watch is because all three teams put on a clinic on floor. Nine gymnasts went 9.600 or higher this meet. NINE. What’re you waiting for? Go watch!

Are These Teams Trending Up or Down? Brockport was the only team to improve its team score, but neither Ithaca nor Ursinus were very far from their respective highs. With the exception of Ursinus’ beam rotation, it’s safe to say that each program is either holding steady and pacing well or already swinging to higher and higher scores.

Why Should You (Re)Watch? This meet featured season highs and high-flying gymnastics. Daejah Rose’s vault stole the show in the first rotation, and the Titans never looked back. Olivia Jahnke has been making a name for herself this season and continued to do so on the road this week.

Are These Teams Trending Up or Down? Oshkosh’s beam lineup showed a chink in its armor while Gustavus posted a season high team total. Expect the Titans to learn from their mistakes this week as they maintain their position near the top.

Brockport and Ithaca at Ursinus

Hamline and Simpson at UW-La Crosse

UW-Stout and Yale at North Carolina 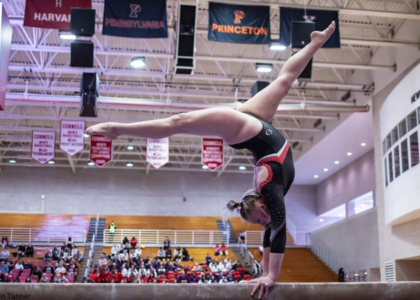