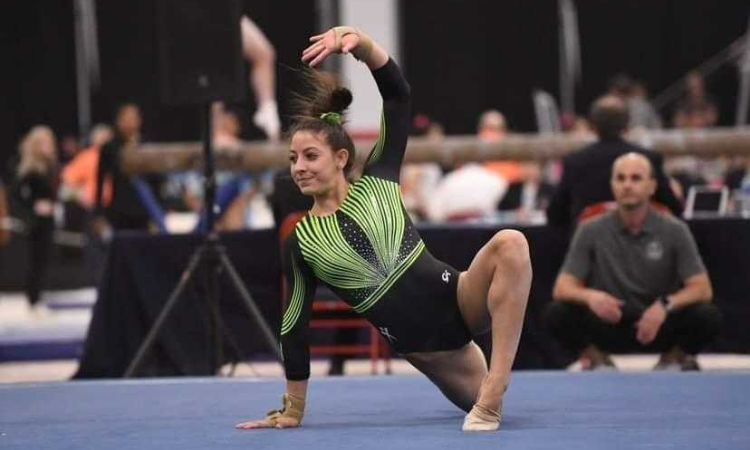 When Danielle Ferris was a child, she ate, slept and breathed Florida gymnastics. As a Florida native, she frequently attended Gator competitions. She took pictures with the current gymnasts on the team. She attended Gator camps and has videos on her phone of the Florida coaches spotting her there.

Florida was all she knew and wanted, so Ferris was left in no doubt when on June 18 she received an offer to become a Gator on a full-ride scholarship for the 2024 season. She accepted on the spot. “I got a call on the 18th with an offer and I was very excited to accept it,” she said. “It was wonderful talking to all the UF coaches — they’re great people, and I cannot wait to get to know them more.”

Ferris spoke for the first time with head coach Jenny Rowland and the rest of the Florida coaching staff on June 15, the first day she could commit to college. She also talked to eight other colleges and felt thankful to be able to speak “with all those great coaches and get to know them a bit.”

In the end, though, it was her childhood dream that prevailed. “I believe they’re all amazing schools, [but] I picked UF because it was my childhood dream school. To be able to achieve that dream was a blessing.”

The commitment to Florida was only the latest in a series of dreams that have come true for Ferris over the last two years. Last year, she qualified to her first Nastia Liukin Cup in the junior division, where she finished first on vault with a nearly stuck Yurchenko 1.5. This year, her vault got even better, and she scored three perfect 10.0s, as well as one on floor, becoming the first gymnast since Alabama alumna Lexi Graber in 2017 to post a perfect score at nationals. There, she was crowned a national champion on every event but beam. “I’ve worked very hard the last few years, and I’m glad to finally feel the payoff,” she explained.

In June, Ferris was also named one of College Gym News’ five-star recruits. Despite her incredible results these past two seasons, the news came as a surprise. “I was on Instagram and noticed my friend messaged me,” she recalled. “I opened it and saw she sent me the five-star recruit post. I was so surprised and excited — I’m very grateful for the recognition.”

None of her achievements, she wants to point out, would have been possible without her mother’s support, who moved from Morocco to Florida as a young woman and raised her as a single parent. “My mom and I have been a major support system to each other,” Ferris explained. “I’m so thankful to have her love and support throughout my gymnastics career, and I hope I continue to make her proud through my gymnastics.”

READ THIS NEXT: For Lily Pederson, Oklahoma Is About Family Bond