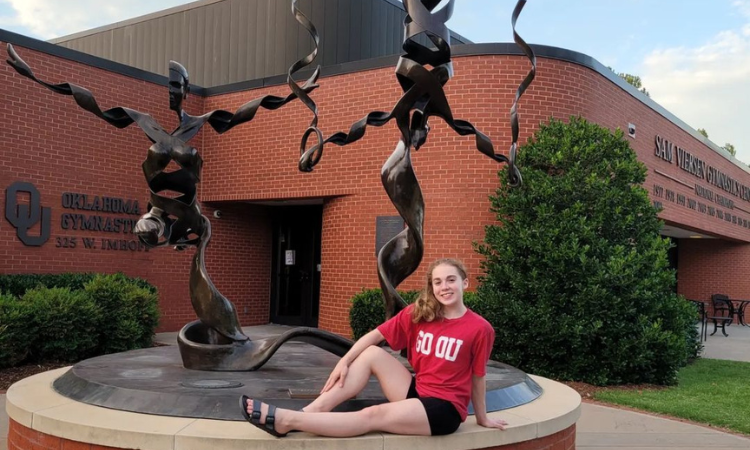 On June 15, the first day she could commit to college, Lily Pederson spent the day on an uncomfortable 12-hour car journey from Minnesota to Oklahoma, heading to the Sooners’ summer camp. During those long hours, braving a bad Internet connection and on-and-off Zoom calls, she talked to seven different schools—Oklahoma, Utah, Michigan, Georgia, Arkansas, Minnesota and North Carolina. At the end of each phone call, she felt a pang in her heart because while she was impressed with everyone, she knew she would disappoint all but the very first. From the start, she knew she would commit to Oklahoma.

The first time Pederson met Oklahoma head coach KJ Kindler was at her gym, Flips Gymnastics, when she was in sixth grade. She and Pederson’s coach Lori Rososki, a former Minnesota gymnast, are sisters, and as a result, Kindler was a familiar face in White Bear Lake, Minnesota. The first time she set her eyes on Pederson, she was there on a family visit, but since Pederson was a rising junior elite, she decided to stay on and watch practice.

Despite the young age, Pederson was aware of the importance of the moment. “When she first watched our practice, it was just very nerve-wracking because I was like, ‘OK, I want to impress her, I want to do good,’” Pederson recalled.

Although she was not allowed to interact with Kindler, Pederson was immediately in awe of her, and it was then that she started dreaming of being an Oklahoma Sooner. “She just seemed so nice, and back then I was like, ‘I want her to be my future college coach,’” Pederson said. “I thought it would be amazing, and ever since then, I’ve been dreaming of that moment. It’s finally becoming a reality.”

In the following years, Pederson could not communicate with Kindler directly, but their relationship continued to grow thanks to her coaches, who kept their Oklahoma counterparts updated about her progress and her routines, and to Pederson herself, who posted frequent training videos on her Instagram page. “They look at my social media definitely, so that’s why I like to post every day about my gymnastics,” she explained.

Pederson completed a stellar level 10 season in 2022 and established herself as one of the top recruits in the class of 2024. In May, she won the all-around title at nationals with a flawless performance, and the following month she was named one of College Gym News’ five-star recruits. “I felt like I had a good chance of being a five-star recruit especially after winning nationals, but even back then I was like, ‘You never know, something could happen,’” she said. “But I had a very good feeling that I was.”

On June 15, Pederson spoke on the phone with all four members of the Oklahoma coaching staff. They congratulated her on winning nationals and asked her what she was looking for in a college. “I liked to say that I wanted something small and compact like a family feeling, where everything is in one area and the college wasn’t spread out, which is exactly what Oklahoma is like,” Pederson said. The coaches answered by explaining their commitment to team bonding, which is very important to Pederson “because I want to be friends inside the gym and outside of the gym.” Finally, they discussed the success of their gymnastics program, including their national championship victory in April. “They talked about that, which made me already more likely to think that I really wanted to go there,” Pederson said. “[It] made me feel amazing that my dream school wants me as much as I want them.”

While making a strong case for Oklahoma, Kindler didn’t force Pederson’s hand. On the contrary, she told her to take her time, talk to the other schools, then give her a call with her final decision. Pederson waited until the following day, but by then she couldn’t wait any longer. “I re-called [Kindler] on June 16 to accept the offer. I really wanted to go there, and my impatience was already up here, so I was like ‘I’m just gonna call her and let her know I want to accept it,’” Pederson said. “After all, all I was thinking after every call [with the other schools was], ‘I love them, but nothing will beat OU. It’s my home. It’ll be my family forever.’”

After Pederson posted about her commitment on social media, she felt as if tables were suddenly turning in her life. Her role models were writing to her, and Pederson was shocked to discover that she herself was a role model to them. “I’m just looking [at] how amazing they are right now, and I was surprised to see they’re looking at me, too, and they know who I am,” she said. “It was so cool because all the people I look up to and that inspire me know who I am, and I thought I just want to make them proud. I was just so happy to see that.”

Her past, moreover, suddenly began to merge with her present and become one with her future. Sixth-grade Lily’s dream of becoming an Oklahoma Sooner was finally a reality. “Just looking back at that moment [when I first met Kindler], I think it’s cool that back then I had no idea what my future held,” she said. “And now I know exactly what it’s going to become and I’m so excited.”

READ THIS NEXT: Recruiting Roundup: July 2022