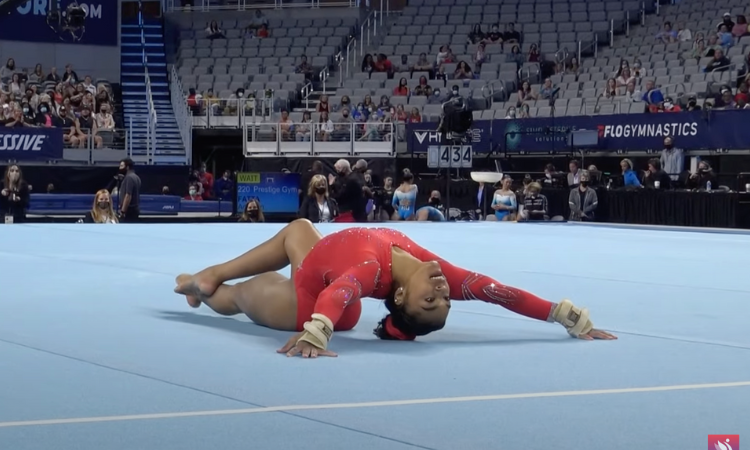 The most anticipated series is back! We looked at the data and videos for each incoming elite freshman on each event to see which gymnasts are at the top of their class across the apparatuses and in the all-around. This week we’re looking at the top elite floor workers for 2023. Without as much data to work with as the level 10 rankings, and since many of the difficult routines will be downgraded once the gymnast gets to college, we focused on the factors that are typically the source of most deductions in NCAA: acrobatic form, extension in dance elements, musicality and dancing ability. We also took into account the potential impact the gymnast could make to their school’s floor lineup.

Frazier’s elder sister Margzetta has been a standout floor worker for UCLA throughout her NCAA career, and dynamic younger sister eMjae is poised to deliver just as much for Cal. The biggest question is which E pass she’ll compete: A full-twisting double back is always a solid choice, but the double layout she competed in elite could show up as well.

We know, we know, this video is over four years old, but we still can’t get over the incredible promise of this routine. Scott’s elegance and quality of movement stands out even among GAGE gymnasts, and with clubmates like Leanne Wong and Kara Eaker already delivering in the NCAA, we’re holding out hope that the stars will align for Scott to perform more routines like this in college.

After an injury in 2021, Greaves seems to be returning to full strength just in time to enjoy a full preseason in Auburn before her college debut in January. With two E pass options in her most recent floor routine, she’s an option to fill the floor spot vacated by Drew Watson.

Alipio doesn’t have the most difficulty on this list, but unlike many of these gymnasts, she has the upside that we know for sure she’s healthy. She competed a full elite summer this year and has the skills to be a steady mid-lineup option for UCLA.

You know how Michigan operates by now: The Wolverines get away with having such a tiny roster by almost exclusively recruiting potential all-arounders. Morgan is no exception. This Everest alumna has a NCAA-worthy double Arabian and leaps so high they can almost compete with Gabby Wilson. Almost.

As one of this year’s most-hyped freshmen, DiCello needs no introduction. While injuries mean she hasn’t been at her absolute peak in 2022, she’s still a Pan American champion on this event, with a double layout that could help her crack even Florida’s incredibly deep floor lineup.

You might know Bacskay primarily as a vaulter, but she’s a remarkably balanced all-arounder in terms of NCAA potential, and since she’s heading to a team as sometimes depth-starved as Nebraska, you can expect to see lots of her in 2023. She’s dynamic and elegant on floor with beautiful twisting form.

German was injured in the spring of 2022, so it’s hard to tell if she’ll be ready for the upcoming NCAA season, not to mention where she’ll fit with the influx of depth Alabama’s freshman class will bring to Tuscaloosa. However, at her best she’s a rare tumbling talent who could bring the Coleman Coliseum roof down with her power and difficulty.

Siegfeldt has an airy double layout that will be more than welcome at Oklahoma, but what will keep you coming back to her floor routine is the lovely positions on her leaps.

Stanford is losing its top three scorers on floor but is bringing in a freshman class full of potential contributors, including Sorrento. Her routine is NCAA-ready with clean tumbling and snappy dance throughout.

Costa Rica’s first NCAA gymnast has lovely form and pose across all four events, but it really shines on floor.

SJSU is losing two members of its floor lineup to graduation, and Cato will be a welcome addition with her strong tumbling and elegant dance elements.