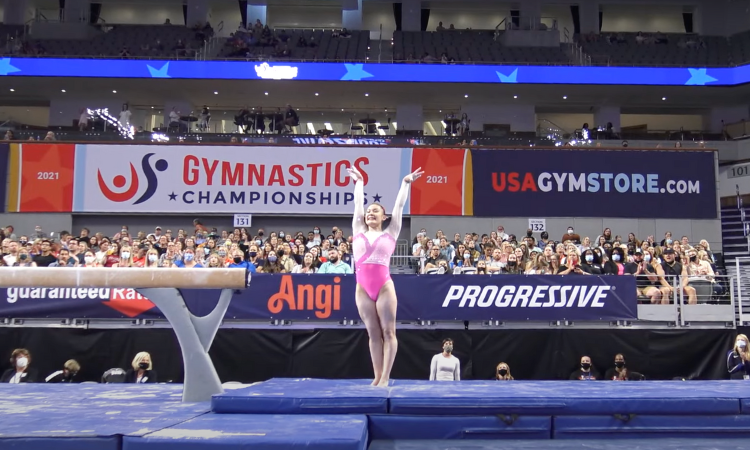 The most anticipated series is back! We looked at the data and videos for each incoming elite freshman on each event to see which gymnasts are at the top of their class across the apparatuses and in the all around. This week we’re looking at the top elite beam workers for 2023. Without as much data to work with as the level 10 rankings, and since many of the difficult routines will be downgraded once the gymnast gets to college, we focused on the factors that are typically the source of most deductions in NCAA: acrobatic form, extension in dance elements, smoothness and confidence. We also took into account the potential impact the gymnast could make to their school’s beam lineup.

While beam has always been a standout event for Alipio, her confidence should be at an all-time high after being crowned the national silver medalist in her final elite meet before heading to Westwood. She has a full bag of tricks to choose from in her college routine, but her fluidity will be particularly welcome.

Frazier is the full package on beam: She has clean, powerful tumbling and excellent dance elements while tying it all together with strong confidence and presence. She should make an instant impact on a Cal lineup that loses its top two scorers from last season.

Like Frazier, DiCello’s beam routine has it all. While the Gators have plenty of depth on the event returning for 2023, it’s hard to imagine her not slotting into the lineup.

Beam was a struggle for Illinois State last season, with the Redbirds eventually finishing 58th in the country on the event. Pujadas Rusiñol has clean tumbling and full extension in her leaps, which should earn her a spot near the end of the lineup from the start of her career.

The highlight of Siegfeldt’s elite beam routine was a triple series culminating in a high back layout; it’s a rare skill in college gymnastics, but it’s plausible that she’ll keep competing it. Her overall beam style is similar to what we’ve come to expect from Oklahoma gymnasts, too: confident and clean.

Posen disappeared from the elite scene after 2019, but she reappeared as a two-eventer in level 10 this year, achieving high scores on both bars and beam. While we can’t find any footage of her recent level 10 competitions, the potential in her junior elite routine is undeniable. Georgia’s beam struggles in recent seasons are well known, but Posen could bring new life to the lineup.

The highlight of Morgan’s routine is her tumbling, where she gets plenty of height without sacrificing control. Some of her split positions could be improved, but that’s where an easier college composition could be an advantage.

We only have training footage of Kowan’s beam routine, but it shows excellence in all the areas that score well in college gymnastics. A particular highlight is her front aerial to back pike combination.

Stanford had one of the top incoming freshman classes even before Sorrento committed late in the process, and beam is a particular strength of the class. As a Canadian elite, she has been competing several elements that are likely to stick around in her college routine, including a back handspring layout step-out acro series and a back one and a half dismount.

Alvarado has superior fluidity throughout her beam routine, moving from element to element without unnecessary pauses. This is a relatively rare quality in college routines and isn’t always rewarded the way it should be. Nevertheless, she will be a welcome addition to CMU’s beam squad, which was its lowest-ranked lineup in 2022.