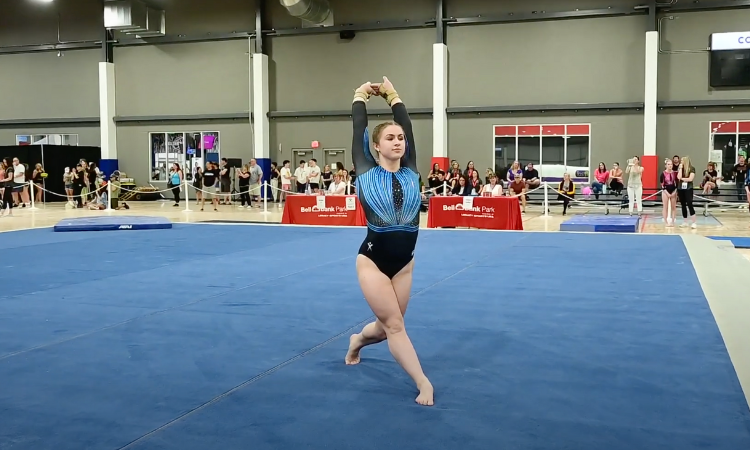 The most anticipated series is back! We looked at the data for each incoming level 10 freshman on each event to see which gymnasts are at the top of their class across the apparatuses and in the all-around. This week we’re looking at the top 10 floor workers for 2023.

If you’re wondering where elites like Kaylen Morgan are, don’t worry! We’ll be reprising our most anticipated elite freshmen series later in the summer.

Piedrahita showcases powerful tumbling throughout her routine, including a full-in as her first pass. She should be a solid contributor from the start of her career, as the Nittany Lions are losing three members of its 2022 lineup.

Ohio State returns its entire 16th-ranked floor lineup, but it’s hard to imagine Mintz not being featured during her freshman season. Her dynamic tumbling, clean landings and fully extended leaps will score very well in college.

Smith has multiple E-pass options to choose from, having competed a double Arabian her junior year and a front double twist in 2022. Between her tumbling skills and her fun dance style, she is a prime candidate to replace the irreplaceable Sydney Soloski in the Utes’ floor lineup.

Miller did not compete during her senior season, but prior to that she was one of the most consistent floor workers in the country; the lowest score she received in 2021 was a 9.575. Her powerful tumbling combined with some engaging choreography could make her a crowd favorite in Corvallis.

Just like on the other events, Harris’ execution stands out on floor. From her pointed toes to her fully extended leaps, Harris excels in all the areas that matter in college gymnastics scoring.

Nguyen’s routine stands out for its difficulty (she finishes with a piked full-in!), but she is also an engaging performer who will shine with the right choreography. It will be interesting to see how her routine composition evolves in college.

Roberts is a gymnast who balances power and finesse extremely well, and nowhere is that more evident than on floor. Her toe point is exceptional throughout her routine, including on double salto skills where toe point is increasingly a rarity. Floor was Stanford’s best event, but the loss of its top three scorers will hurt. Roberts should immediately find herself in the back half of the lineup.

It was once again difficult to find recent, publicly available video of Gladieux’s floor routine, but her 2019 Nastia Liukin Cup performance shows beautiful extension on her leaps. A late 2021 routine shows off a full-in as her first pass rather than the previous double layout, a move which shows that she is ready to shine in college.

Smith’s power and height on her tumbling make her floor routine stand out, but she manages to preserve excellent execution as well. She is an engaging performer who should find herself deep in the Spartans’ lineup from the start of her career.

Torrez’ elite routine showed off her many E-pass options, but her preferred first pass in level 10 was the double layout; it’s likely we’ll see that stick around for her college career. The defending national champions lose only one member of their final floor lineup, and Torrez will likely be at the top of the list to replace her.

READ THIS NEXT: Most Anticipated Level 10 Freshmen on Beam