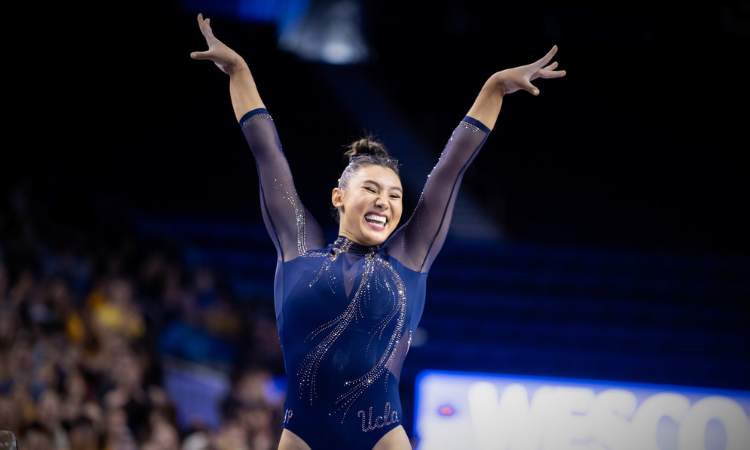 Today we’re talking GOATs! From the all-time best across the country to favorites and underrated alums, we’re highlighting all the names we think back on fondly when remembering the best moments in NCAA gymnastics history.

Think about the teams on your beat, who are some of the former gymnasts you’d consider to be their team’s greatest of all-time?

Savanna: The amount of thinking I had to do for this question was a lot, but here goes! First off, you can’t think of Oklahoma gymnastics without thinking of Maggie Nichols. I’m still bitter she didn’t get the nationals send off she deserved (thank you, pandemic!), but it doesn’t erase her accolades. Oklahoma also has Brenna Dowell, Chayse Capps, AJ Jackson, Maile’ana Kanewa, Haley Scaman, Anastasia Webb, Jade Degouveia among many many others. Denver’s elite list includes Nina McGee, Maddie Karr, Brianna Springer, Nikole Addison and Julia Ross, and Lynnzee Brown will certainly end up on this list once she officially completes her career. Adnerys de Jesus will certainly go down as an all-time great for Iowa State despite only competing one full season for the Cyclones, joining names like Meaghan Sievers, Haylee Young, Celine Paulus, Janet Anson and Betsy Hamm. For the Mountaineers, current assistant coach Zaakira Muhammad absolutely made a name for herself in West Virginia history alongside Kirah Koshinski, Janae Cox, Kristen Macrie and Kristin Quackenbush.

Brandis: I’m going to limit myself to no more than two gymnasts per school, even though this is a near impossible task. For Arizona, I’m going with its lone Pac-12 (actually, Pac-10 at the time) Gymnast of the Year Stacy Fowlkes. Ashley Kelly gets the nod for Arizona State thanks to her gymslam and helping the Sun Devils dominate in the mid-2000s. I’m choosing Jamaican Olympian Toni-Ann Williams for California’s greatest while three-time NCAA champion Joy Selig tops Oregon State’s list. Stanford’s GOAT status belongs to Elizabeth Price and current Utah coach Carly Dockendorf is fellow conference foe Washington’s top dawg. That’s as many definitive decisions as I could make. For Utah, you could make a realistic case for Ashley Postell, Missy Marlowe or Theresa Kulikowski. UCLA is even tougher, with Jamie Dantzscher, Kyla Ross and Tasha Schwikertz all worthy of the honor.

Who are some of the gymnasts who may not have a big name but that were crucial to their team’s success?

Emily M: I have to call out Rutgers’ Jenna Rizkalla and Makenzie Shank here. Both imbued the team with so much energy when they had success on their pet events, vault for Rizkalla and beam for Shank. Illinois’ Mary Jane (Horth) Otto also gets lost in conversation sometimes, and she shouldn’t. She was a mainstay of Illini lineups throughout injuries and had one of those rare sixth years.

Savanna: McKenzie Wofford of OU is one I really consider crucial to the Sooners’ success. Her bar routine was so consistent that you could almost guarantee a 9.9-plus every single time. I also think of Alex Marasco for Iowa State with her consistency on beam, with a vault appearance whenever it was necessary.

Peri: Morgan Tong was all but a guaranteed hit beam routine for Central Michigan, but went under the radar until junior year. Her first two years in college were spent doing three events, and had sophomore year interrupted by covid. Junior year she shone as a specialist at the back end of the beam lineup just shy of a 9.9 NQS, en route to NCAA Championships as an individual.

Brandis: A name from recent memory that comes to mind immediately is Evanni Roberson. In addition to her pair of perfect 10s on beam, Roberson was an all around stalwart for Washington for several years and was instrumental in its string of top 20 finishes while she was on campus.

Who are some sentimental faves of yours from the teams on your beat?

Emily M: Bridget Hodan at Illinois for sure, her illusion turns give me pure joy. I always had a big soft spot for Tiara Wright at Maryland, too. Her gymnastics was just delightful. Anne Maxim was another sentimental fave; her vault was stunning, and it was fun to watch her succeed at Michigan after transferring from Michigan State. Speaking of the Spartans, Hailee Westney is another fave. I was also always rooting for the Gophers’ Abby DeMuse; she went through so many injuries and her comeback was so joyous.

Savanna: Brehanna Showers from OU is one. I hated that injuries plagued her after having such a good season in 2018. Alexis Vasquez from Denver always gave me goosebumps on beam, and Sydney Converse was the gymnast who introduced me to Iowa State for fantasy gym purposes, so she’ll always be a sentimental favorite of mine.

Peri: Anyone from Ontario is automatically on my sentimental faves list! I’m excited to be covering Dahlia Solorzano-Caruso this year and am hopeful that she makes a return to all-around competition for her senior season.

We of course don’t know of every single walk-on that’s competed in college gymnastics, but from those you do know of, who would you say is the greatest walk-on of all time from the teams on your beat?

Savanna: Tricky question, but let’s see. From what I know of who is a confirmed walk-on, Iowa State’s Makayla Maxwell (yes, she’s currently competing, but have you seen her vault? Enough said) and West Virginia’s McKenna Linnen are easily among the top. Denver’s roster size is so small that walk-ons are more of a rarity, but I believe Diana Chesnok fits this criteria since she was a solid contributor, but I don’t believe she was on scholarship. Similarly, I’m going to go with Karrie Thomas of Oklahoma because it was never really confirmed if she was on scholarship after her transfer from Maryland, but she was easily a big contributor to the Sooners’ bars and beam lineups.

Brandis: Finally, a semi-easy question! I have to shout out UCLA’s Gracie Kramer here. She’s one of the most prolific walk-on gymnasts of all time thanks to her uniquely-choreographed floor routine that earned a perfect score and garnered Kramer multiple All-American honors.

Think about gymnasts on your beat who may have come into their own later in their college careers. Who do you wish had more eligibility because of this?

Emily M: Oooh juicy. Shank had a banging senior season for Rutgers. I also remember thinking Nebraska’s Grace Williams really re-found her groove in her last year — would’ve loved to see what she could have done with one more. Brianna Brown, certainly. She overcame so much and had a great final season. What a joy that we do get her for one more year in 2023, but Mallory Mizuki really embodies this question.

Savanna: Hmm…Alex Marks from Oklahoma comes to mind. She joined in January 2016, was a vault specialist for three years, but was solely a bars specialist her senior year. She was definitely one I would’ve liked to see have extra eligibility solely to see her continue the specialist stretch. Jordan Draper is another one that fits this category for me. She started out as an inconsistent floor worker but really developed herself into a two-event gymnast in her senior season.

Peri: Sandra Elsadek formerly of Ball State (now Georgia). She’d competed all around in her first collegiate meet, then waited until the back half of her senior year to do all around again – and cracked the 39 mark in a conference that heavily relies on specialists. With lineup questions surfacing at Georgia, I’m eager to see how Elsadek will contribute in the fall.

Are there any gymnasts you think compete in college gymnastics in the wrong era? Gymnasts who may have performed better or found more success if they were on the roster different years than they ultimately competed.

Emily M: Whoa tough question. It goes without saying that all of the really perfect Yurchenko fulls we see would’ve benefitted from being around before that skill was downgraded. I’m going with Kylie Noonan. I mean, who else was doing a cat leap one and a half in the year 2021?

Savanna: I second Emily on this one. Thinking about everyone who had a perfect Yurchenko full that missed out on the 10.0 start value, the number of 10.0s that would be handed out. I think I’ll go with Andrea Maldonado though. Yes, she had success in her three years at Iowa State, but I keep thinking about how good her floor skills were and she had the possibility of contributing to more events in earlier seasons than what she competed.

Create an all-star team from all-time great gymnasts on your beat. Who’s on it and why? Consider that you’d need to fill lineups on all four events.

Emily M: Hoooo boy Elizabeth with the big questions. Alright, I promise to be organized again. I decided to have a little fun and name an alternate for each event, only picking from the team I had already assembled. My methodology was to look at team record books and compare record-holders across teams. There was also a little intuition mixed in, because as we know it’s hard to compare scores across eras. I left off some folks who scored 10s, for example, for people who topped out at 9.975, because the latter was maybe more consistent or scored that max more often. Some years were just stingy on 10s! I also ignored the devalued Yurchenko full for this exercise, because that difference makes it even harder to compare and I wanted to be fair to the folks who maybe would have competed a 1.5, but just didn’t need to. Folks like Ray, Houchin, Ramler, Loper, Mable, Cain, Simpson or Wong could step into the all around any day of the week. This team would be unstoppable. Fight me, SEC!

Savanna: I see Emily’s team and raise you my Big 12 team. This took some time, but here was my thought process. Like Emily M, I too consulted record books for all the Big 12 schools, but I looked for those who finished the season with a high NQS or who had a consistent number of 9.9-plus scores. But I challenged myself a bit by only allowing myself to pick four athletes per school. This resulted in me having a full lineup plus two alternates.

Peri: Heads up, my lineups are very Central Michigan and Kent State heavy. Road to Nationals helped with my record-scouring and making sure I didn’t pick an all-time roster that was mostly made from the last five years. Last note: In true MAC fashion, I’m not using a single all-arounder.

Brandis: As fun as picking this team was, there are so many amazing former Pac 12 gymnasts that I could do this again tomorrow, and it would be way different. While the lineups are Utah and UCLA heavy with those teams having garnered better results over the decades, I did make sure that all eight schools are represented on the Pac-12 all-star team.

Let’s think about coaching. If you had to name an alumna the next head coach at the teams on your beat, who would you name to the various positions?

Savanna: Oklahoma: Maggie Nichols;  Denver: Maddie Karr; Iowa State: Haylee Young; West Virginia: Zaakira Muhammad. I am also cheating on my last two because they are already on their respective staffs, but they’ve both made a massive impact, so I would love to see that continue to the head coach level.

READ THIS NEXT: CGN Roundtable: Floor Music and Choreography