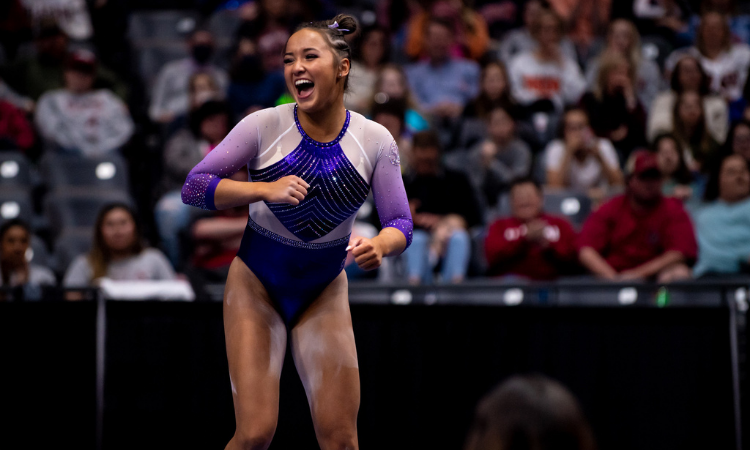 Next up is the Raleigh regional. Wednesday will feature No. 33 Towson and No. 35 North Carolina in round one. Thursday we jump into round two action with No. 6 LSU, No. 11 Missouri, No. 22 Iowa and No. 30 N.C. State competing in the afternoon session and No. 3 Michigan, No. 14 UCLA, No. 20 Maryland and the winner of round one in the evening session. Two teams from each of these Thursday competitions will advance to round three on Saturday where the top two from that meet make it to nationals.

After a 21 year drought, this is Towson’s second season in a row qualifying to regionals. It’s been a record-breaking season under third-year head coach Jay Ramierez with the Tigers having scored eight of their 15 highest program totals, set program records on vault and beam and seen 26 gymnast career highs.

In head coach Danna Durante’s first year at the helm, the Tar Heels are back in postseason action for the first time since 2017. North Carolina finished the regular season undefeated in conference play, set its highest season-opening score in program history and earned its highest team score in 18 years.

Towson is coming off a runner-up finish at the EAGL championship while North Carolina fell to fifth after counting a fall on beam. However, these teams are so evenly matched that either outcome wouldn’t come as much of a surprise. Towson has a season high just 0.075 higher than North Carolina while the Tar Heels sit marginally above in season average. Who advances to round two will come down to which one hits the best on the day.

Towson’s Jenna Weitz has earned 9.8-plus eight times this season on beam, and her unique switch leap to layout step-out to split jump is a showstopper. North Carolina’s Elizabeth Culton earned regular season first-team All-America honors on beam last year and has qualified individually on both beam and bars this season. Her teammate, freshman Julia Knower, is an individual qualifier in the all-around; keep an eye on her high-flying Yurchenko full and stunning beam work.

From COVID protocols to broken beam end caps, LSU has dealt with its share of adversity in 2022. Though its lows have been low, its highs have been very high (including two 198s and a program best 49.775 on floor). The Tigers will be looking for redemption after a disappointing performance at the SEC championship. Missouri on the other hand is enjoying its best season ever, culminating in a fourth-place finish at the SEC championship and conference awards for junior Sienna Schreiber and head coach Shannon Welker. Though the Tigers have saved their highest-scoring performances for home meets, it’s worth noting that they’ve defeated LSU in both of their previous meetings this year. Bars have been Iowa’s bugaboo all season long, and even a hit rotation may not be enough to unseat one of the upper seeds without some help. That said, the Hawkeyes outscored both Missouri and LSU at their respective conference championships, so anything is possible. Finally, N.C. State has had a perfectly fine 2022 season. Its star all-arounder Emily Shepherd is peaking at exactly the right time and will add a much-needed boost on vault.

In isolation, LSU and Missouri are the clear-cut favorites to move on to the regional final. However, N.C. State was arguably the Cinderella story of 2021 after being controversially assigned to a round one dual before making it all the way to the regional final. The precedent is set for a potential repeat. Iowa scored higher than both LSU and Missouri at the recent Big Ten championship where it finished third overall. If either Tigers squad struggles or simply has an off meet while the Hawkeyes put together a solid performance, Iowa could see themselves competing on Saturday night.

It’s easy to understand why Haleigh Bryant is one of the NCAA’s reigning national vault champions, but she’s also excellent on the remaining three events. Missouri freshman Jocelyn Moore boasts one of the few vaults in the country to rival Bryants:  The height, distance and flared out technique on her Yurchenko one and a half are unmatched. The Hawkeyes are known for their eye-catching floor routines, and Lauren Guerin just won her second consecutive Big 10 floor title while JerQuavia Henderson hasn’t scored below a 9.9 this season. Lastly, N.C. State’s Shepherd is certainly one to watch on all four events, but second team All EAGL honoree Alexis Ortega has one of the most unique beam compositions in the country.

EAGL 2022 Gymnast of the Year Deja Chambliss can be great on all four events, but vault—on which she scored a perfect 9.950 earlier this season—is where she truly shines. Meanwhile, Pitt freshman Hallie Copperwheat earned 2022 EAGL Rookie of the Year honors thanks in large part to her work on bars and beam. Four-time Rutgers qualifier Belle Huang is no stranger to the regionals game; her hit routines on floor and beam can contend with the best in the country. Similarly, Bridgeport’s Kathryn Doran is one of the few DII qualifiers to regionals—deservedly so, as her skill and technique on bars is top notch.

Note: Lali Dekanoidze will not be competing after undergoing surgery for a season-ending knee injury.

The Wolverines have certainly competed like the reigning national champions this year, culminating in a definitive Big 10 conference championship victory and at least one share of all the individual event titles.

If LSU has been streaky this season, then UCLA has been downright chaotic. However, this squad is nothing if not talented and has proven it can overcome just about any adversity. That said, it remains to be seen if the Bruins can post a big score on the road. It’s also worth noting that North Carolina and Towson are steady teams with solid averages just below the 196 mark, not far off the Terps’ 196.006. If either UCLA or Maryland are less than their best, either EAGL team could realistically push through to the final.

Michigan is without a doubt the favorite. Even on its worst days—with the exception of that three-fall day at Nebraska—it can comfortably outscore the field. However, UCLA has been surging and shown flashes of greatness. On UCLA’s best day and Michigan’s worst, the Bruins and Wolverines could be in a battle for the best seeding in the final. Regardless, both should advance. Maryland has topped out at a 197.175 and put up two other 197s in March. If UCLA opens the door, there’s a chance that the Terps could win the upset and head to the final, but they won’t do it without mistakes from the Bruins. For whichever of North Carolina or Towson we see here, the goal will be to finish as high as possible but an upset over Maryland isn’t out of the question (especially with errors from the Terps).

Not to put too fine a point on it, but Michigan is unmatched on the power events. You won’t want to miss a single one of its vault and floor routines. You also won’t want to miss ULCA’s bars, but for very different reasons… All season, the Bruins have struggled to crack 49 despite fielding a full lineup of former elites. Conversely, the Terps have been outstanding on bars; this is the rotation where they could gain valuable tenths over their opponents.

Rutgers boasts two more individual qualifiers in addition to session one’s Huang: Hannah Joyner (all-around) and Emily Leese (vault). Temple’s Julianna Roland earned her second-consecutive regionals berth on vault while teammate Donabedian will make her debut on floor. Both gymnasts hold or share program records on their respective events. Pittsburgh’s Chamberlain is making her long-awaited regionals debut on bars; she qualified to regionals on the event in 2021 but missed out due to injury. Finally, George Washington’s Kendall Whitman earned her spot at regionals by virtue of her energetic floor routine that includes not one, not two, but three E passes.

Michigan proved at Big Tens that it can hit when it counts. Assuming the Wolverines have a good, or even decent, day, they’ll punch their ticket to Ft. Worth. LSU is the other likely advancer. The Tigers always seem to find a way when a national berth is on the line. Still, they had a bad day at SECs where they finished behind Missouri. Those other Tigers are certainly upset threats, with a few high-197s in their pocket on the year. UCLA, too, has potential to sneak into the picture, with that 198.050 versus Cal on the books. LSU needs to hit on the day; if it doesn’t, there will be a fierce battle for the second spot.

READ THIS NEXT: The NCAA Postseason Format Explained